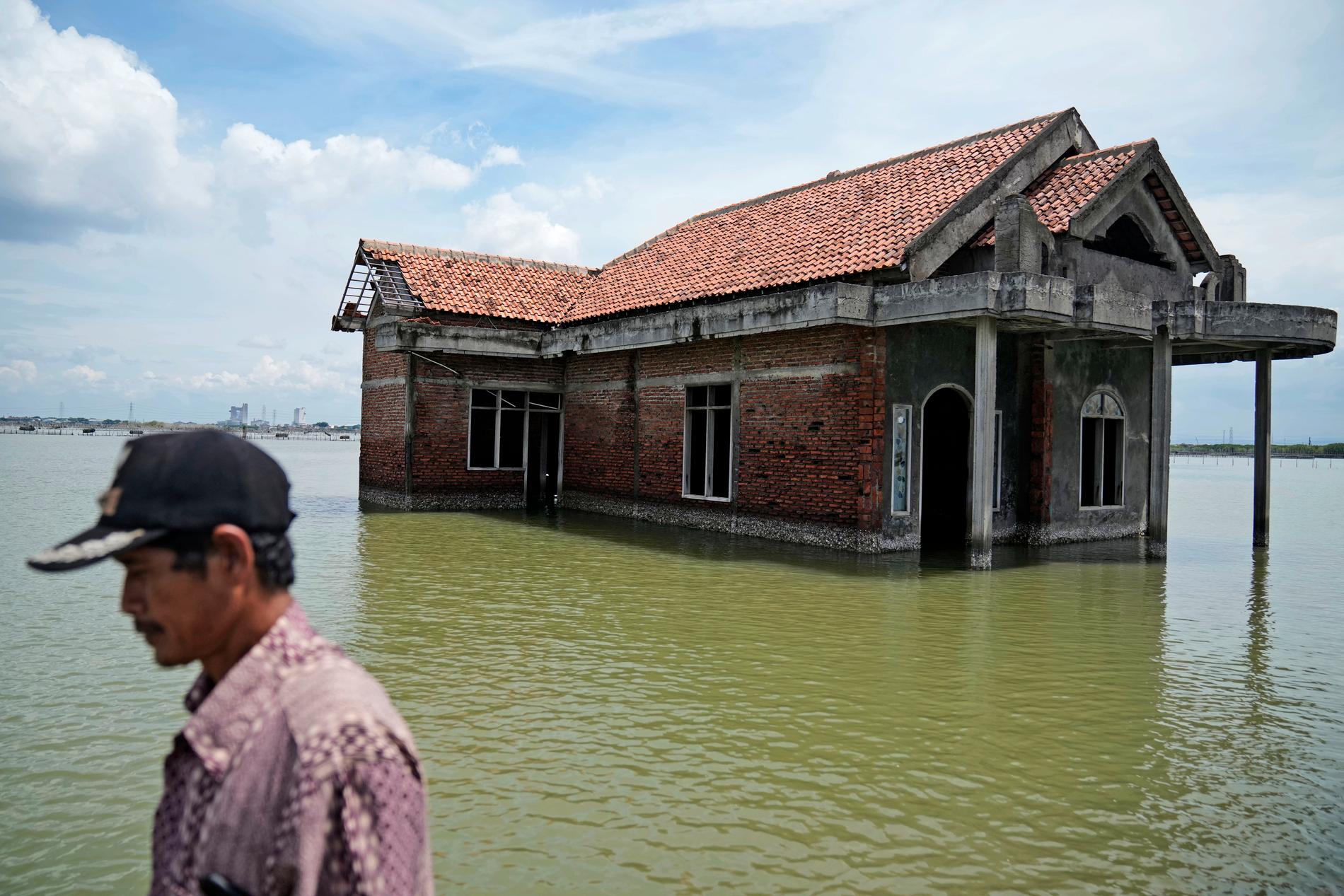 A man walks past a house that was abandoned after it was inundated by water due to rising sea levels in Sidogemah, Indonesia, November 8, 2021. Climate hazards such as floods, heat waves and drought have exacerbated more than half of hundreds of known infectious diseases in people, according to a recent study. Photo: AP / NTB

Climate change gives us more floods, heat waves and droughts. This in turn affects our health – in a negative sense, shows a new research study.

Climate hazards have already worsened more than half of the hundreds of known infectious diseases in humans, including malaria, hantavirus, cholera and anthrax, according to a recent study published in the journal Nature Climate Change.

Researchers found that 218 out of 375 known infectious diseases in humans appear to be exacerbated by extreme weather linked to climate change.

It has long been known that disease is affected by the weather, but this study shows that the climate affects human health to an extensive extent.

– If the climate changes, the risk picture for a number of diseases also changes, emphasizes co-author of the report, Dr. Jonathan Patz, director of the Global Health Institute at the University of Wisconsin in Madison.

He believes that one must see this development as a symptom that our planet is sick.

– The findings in this study are frightening and illustrate well the enormous consequences of climate change. Climate change is disease-causing for humans, says Carlos del Rio, specialist in infectious diseases at Emory University. He has not himself participated in the study.

– We who work with infectious diseases and microbiology must make climate change one of our main priorities. We must work together to prevent a catastrophic development, he says.

The researchers did not only address the risk of infectious diseases, but looked at all types of human diseases, including non-infectious ones such as asthma, allergies and even animal bites. They would try to find out how many diseases can be linked to climate hazards in one way or another.

Of 286 unique diseases, 223 of them appeared to be exacerbated by climate hazards. Nine were reduced, while 54 disease states appeared to be both worsened and reduced.

One of many factors

The researchers behind the study stress that the development of disease is only one of several likely factors in climate change.

Camilo Mora is a climate data analyst at the University of Hawaii and leader of the study. He points out that the study is not about predicting future cases.

– There is no speculation here at all. This is a development that has already happened, he says.

He cites an example from his own life. Close to five years ago, the village of Mora that he comes from in Colombia was flooded. For the first time he experienced that his living room was under water. The water created ideal conditions for mosquitoes – and Mora herself contracted a virus transmitted by mosquito bites, namely the tropical disease chikungunya.

The virus is spread exclusively by blood-sucking Aedes mosquitoes. He still has joint pain as a result of the virus.

Mora originally wanted to investigate whether and possibly how climate hazards affected the covid-19 pandemic.

He found that extreme weather both worsened and reduced the risk of becoming infected.

During extreme heat in poor areas, he saw that people huddled together to cool down, which made them more vulnerable to infection. But in areas that experienced heavy downpours, there was less infection because people stayed indoors at home and thus affected fewer people.

Critical of the methods

Long-standing climate and public health expert Kristie Ebi at the University of Washington says that it is an established fact that man-made climate change has led to changes in the weather, and that many health problems are linked to it.

She is nevertheless critical of some of the methods and conclusions in the study.

– Among other things, the authors do not discuss the extent to which the climate hazards that were assessed changed during the study’s time period, she says.

However, four external experts, including Carlos del Rio and Aaron Bernstein, director of the Center for Climate, Health and the Global Environment at the Harvard School of Public Health, believe that the study is an important warning about how climate change is already affecting and will affect health our.

– This study emphasizes how climate change can lead to more contagious and unwelcome surprises, comments Bernstein in an email to the AP news agency. He believes the study should be a good reminder that you must work to reduce climate emissions.

He emphasizes that it is already known that global warming and the loss of habitats bring animals closer to humans. This also increases the risk of disease transmission from animals to humans.

See also  Kyiv: The situation in the Black Sea is stable, the "grain corridors" are working