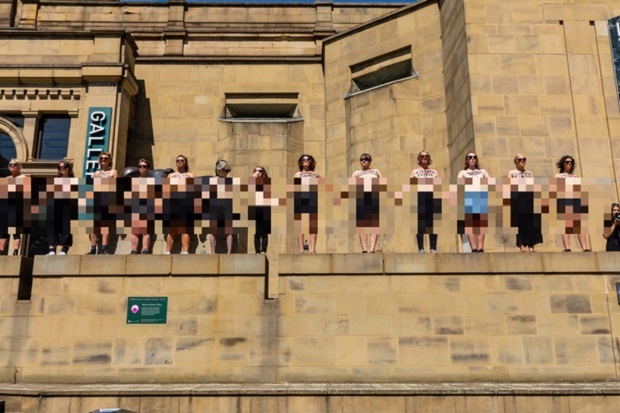 LEEDS – More than 12 women stand topless in a bold protest in downtown Leeds, English . They are protesting climate change and its dire effects.

Protesters stand half-naked outside the Leeds Art Gallery, in downtown Leeds, as part of a protest on Saturday (17/7/2021) afternoon.

Demo organizer; Extinction Rebellion, as quoted Leeds-Live, Tuesday (20/7/2021), said the protests were designed to showcase the dire effects of the climate crisis.

During the protest, a speech was read explaining that their actions were designed to commemorate International Day of Justice.

Organizers said it was also to draw attention to the fact that extreme weather events and other environmental and political disasters caused by climate change disproportionately affect women.

Also read: Worried about the Birth of a New Variant of COVID-19 from Nightclub Parties in the UK

Talking about the protests, organizers said: “The climate crisis has claimed too many lives, and most of them are women.

“International Day of Justice marks the importance of standing up and joining the fight to bring justice to the victims of crimes against humanity and genocide,” the organizers continued.

“We are taking this action today in solidarity with those in the global south who are suffering right now and urge governments to do more to tackle the climate crisis,” they continued.

“We must immediately divest from fossil fuels. And work to restore the damaged land and homes of animals and humans,” the organizers continued.

See also  The British political class is at the bedside of Boris Johnson, in intensive care