Medical staff of the Ministry of Health checks passenger’s temperature, as a preventive measure in response to the spreading coronavirus disease (COVID-19), upon their arrival to El Dorado international airpot in Bogota, Colombia March 15, 2020. REUTERS/Luisa Gonzalez

The report also indicates that the number of deaths is 167. Today, the country reaches a total of 28,970 deaths since the virus reached the national territory.

Colombia reached 959,572 infected, of which 70,162 are active cases and 858,294 correspond to positive cases that have already overcome the disease. 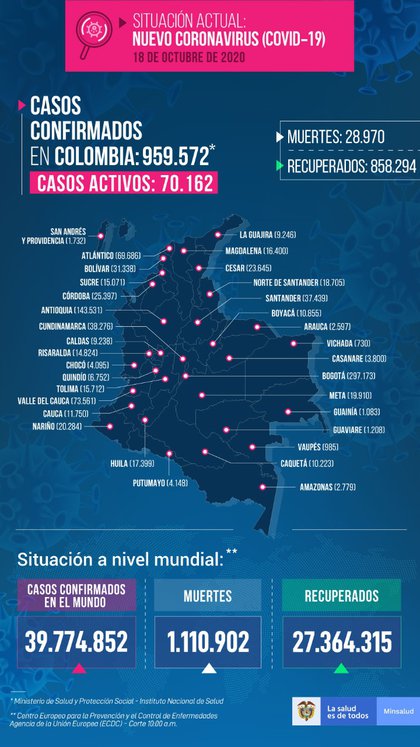 Regarding the contagion of Covid-19 by cities and departments of the country, Antioquia and Bogotá continue to lead.

It is the key moment of responsibility and solidarity: Minsalud

It is the key moment of responsibility and solidarity: Minsalud

The Minister of Health and Social Protection, Fernando Ruiz Gómez, made an invitation not to lower our guard and not allow crowds and the lack of social discipline to lead to losing what has been gained so far in the face of the pandemic, within the framework of the Commitment event by Colombia, developed in Pasto.

“The call is to remain calm, have prudence and that knowledge as citizens, that in this stage of selective isolation with individual responsibility we all have to be supportive and responsible in the face of the affectation”Ruiz said.

He added that it must be clear what is coming, since there was a first peak that represents the greatest impact and that has been reducing in the number of cases of contagion and deaths, but that this should not generate a false perception that everything happened.

“In the analyzes we have done with the strategic committee and the committee of national and international experts, reviewing the entire situation of the country in the last two weeks for us today it is clear that the economic opening has not generated a greater impact on the growth of cases, but what is causing us risk are crowded situations and situations in which people get together and generate the possibility of transmission and increased contagion ”, added.

Two scenarios have been evidenced that increase the chances of contagion: in the housesWhen extended family or friends arrive and security measures are ignored, exposing the same population at risk from the family nucleus, such as adults over 60 years of age or people with pre-existing diseases.

The second is the crowds in public space. Faced with this, the minister emphasized that one must be aware of the high risk of damage that can occur and mentioned that it is already happening in cities such as Bogotá, Medellín and Cali.