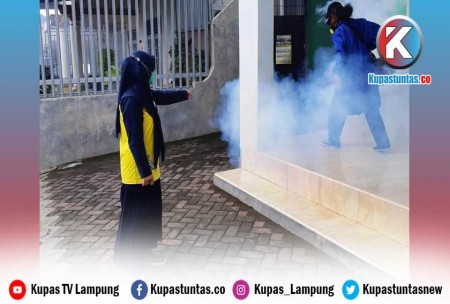 Kupastuntas.co, South Lampung – Residents of South Lampung Regency (Lamsel) are asked to be aware of the increase in cases of Dengue Hemorrhagic Fever (DHF) in early 2022.

Head of the Communicable Disease Prevention and Control Section of the Lamsel District Health Office, Ridwan Syani, said that this was because the increase in dengue cases usually could occur until February because the rainfall was still quite high.

He said his party had written to all UPT Puskesmas in Lamsel to take anticipatory steps such as Eradicating Mosquito Nests (PSN) by Draining, Closing, and Burying (3M) Plus and also outreach to the community.

“Even Puskesmas friends have used social media to convey messages in addition to direct counseling, including distributing abate logistics and fogging,” he explained.

In 2021, he said, the total number of dengue cases in Lamsel Regency was 222 cases with the highest number of cases occurring in December.

“At the beginning of this year there were still cases but data from 27 health centers had not been received by me,” he said.

Meanwhile, Head of the UPT Puskesmas Hajimena Natar, Nessi Yunita said, during the beginning of 2022, 6 cases of DHF were found in his area.

“There are 2 cases in Hajimena Village, 3 cases in Sidosari Village and 1 case in Summoning Village,” he said.

On the findings of the case, he said that his party immediately moved to do fogging to 2 locations that were considered prone to dengue cases.

“There are those who have recovered, some are still in the hospital. So that this doesn’t happen again, we have fogged twice,” he explained.

In addition, he said, his party has gone directly to the community to conduct counseling by involving village officials to carry out PSN activities.

“We immediately share the task of approaching the community to carry out PSN activities. We also go to the village head so that we can mobilize the community. We show places where there are usually lots of mosquito larvae. We hope that people can do 3M Plus,” he explained.