How much is Germany affected by the virus? What are other countries doing to combat Sars-CoV-2? The most important data and facts about the corona virus.

In the Federal Republic, more than 107,000 people have now tested positive for the corona virus. This comes from figures from the American Johns Hopkins University. More than 2,000 of those infected in Germany have died – and around 36,000 have recovered (as of April 8). For the first time since January 26, when the first person in Bavaria tested positive for the corona virus, the number of active cases is declining. This means people who are currently infected with the virus. Germany counted 72,864 active cases on Monday; around 3,000 fewer active cases on Tuesday.

Confirmed coronavirus cases in Germany, by patient status (in thousands)

The graphics shown show confirmed coronavirus infections. Their number always lags behind reality. It can be assumed that the number of infected people is actually higher. Many countries only test risk patients and those with strong symptoms. In addition, up to five days pass between the infection and the appearance of the first symptoms. The Sars CoV-2 test and its evaluation also take time.

In an international comparison, it becomes clear that the expansion curve is now somewhat flatter than a week ago. The curve is similar to that of Italy.

Rapid spread in the US, flattening curve in Germany

On the 37th day since the count began, the number of positive corona tests doubled every 15 days. Italy took a similar development.

The doubling time in South Korea and Switzerland is even longer. Large events were canceled early in Switzerland, and a lot was tested in South Korea in order to be able to understand the distribution precisely. South Korea has slowed the spread by rigorous contact tracking and isolation of the infected, as well as nationwide testing.

Read our analysis of the measures in five badly affected regions such as Hubei in China and Lombardy in Italy here.

However, it is difficult to assess how common the virus is based on the confirmed cases. Each country has a different test regime. The number of people who died of Covid-19 is therefore more meaningful when comparing countries. The situation in Germany looks much better here, especially compared to Spain or Italy. In Germany, there are only two people per 100,000 people who have died of lung disease Covid-19.

Spain and Italy have the most deaths compared to the population

Number of corona deaths per 100,000 population

Many European countries have introduced restrictive measures in recent weeks. The following map shows the Overview of the situation in Europe:

The red colored countries have imposed a national curfew.

Italy currently reports the highest number of infected people after China and the United States. Just over 135,000 infections have been confirmed in Italy. Over 17,000 people have died from Covid-19.

Confirmed coronavirus cases in Italy, by patient status (in thousands)

Above all, it is sick, older men who die from Covid-19. This is shown by a new study by the Italian health authority Istituto Superiore di Sanità (ISS). For the statistics published on March 19, the age, gender and in some cases also the state of health of 3200 deceased were surveyed, two thirds of the victims came from Lombardy. 75 percent of the deceased were male, 25 percent female. Of the 481 cases that were also statistically recorded based on health status, only six had no previous illnesses before Covid-19.

In Italy, twice as many men as women died

Case numbers continue to rise steeply in the United States

This development is worrying because there is little evidence so far that the spread of the virus in the United States can soon be curbed. The time in which the number of cases doubled remained relatively constant at around three days for three weeks, now it is at least around 7.8 days.

Slowing in the US continues

There is also little hope in the development of the number of deaths in the USA: The growth is still almost exponential, on the logarithmic scale in the graph this results in an almost straight line. The United States is quickly catching up with countries like Italy and Spain, where the growth in deaths is weaker.

See also  Temperatures up to 50 degrees: in the Arab Emirates, rain falls on command

Rapid increase in deaths in the United States 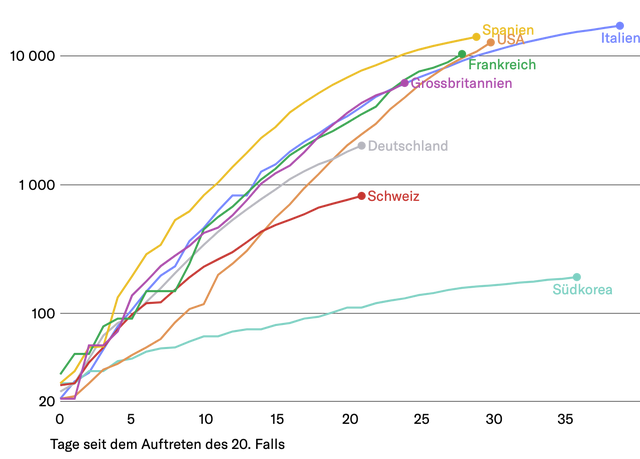 The largest virus focus in the United States is in New York. In the metropolis alone, more than 57,000 people have already tested positive for the corona virus (as of April 3). Several other thousands of cases are currently also counted in other large cities.

How the virus spreads in the United States

The state of Washington is also badly affected. According to the Guardian, the high number of people infected there may also be due to the fact that a lot of testing was carried out early on, because the first case in the United States became known in Washington State.

For almost two weeks now, there have been more cases outside of China than in the country of origin of the pandemic. China has almost 82,000 cases, with only a few cases added each day. The number of newly infected people is currently as low as last time at the end of January.

In addition, a large number of patients have recovered in all provinces. Individual provinces like Hunan and Anhui have managed to survive that almost all sufferers. Of around 1,000 patients each, only four died in Hunan and six in Anhui.

Almost all patients have recovered in many provinces

Number of coronavirus cases in different provinces of China, by patient status *

Most cases in China have occurred in Hubei Province, from where the pandemic started. By March 17, around 55,100 of around 67,800 patients had recovered and around 3,100 had died. In comparison, the province had a high proportion of deceased and not yet recovered patients.

After the disease broke out, the Chinese government initially sealed off its place of origin in Wuhan, and large parts of Hubei Province soon followed. Wuhan quickly set up temporary hospitals. At the same time, production for masks and other necessary goods was ramped up because the outbreak occurred around the Chinese New Year. Outside of Hubei, the authorities also restricted the population’s freedom of movement.

Most people in Hubei are healthy again

Confirmed cases of coronavirus in Hubei province, by patient status (in thousands)

1
Beijing seals off Wuhan and within hours the measures are extended to large parts of Hubei.

2nd
Completion of the second emergency hospital in Wuhan.

3rd
The numbering of cases is changed in Hubei.

4th
The number of people who are currently ill is starting to decrease.

5
Hubei eases the measures outside of Wuhan.

On March 14, the authorities in Hubei relaxed the measures outside of Wuhan. Only the city of origin is still considered a high-risk zone. Other provinces have also eased their quarantine in the past few days. Around 64,000 patients have currently recovered in Hubei, around 3,200 people have died and around 520 are still ill with the virus.

China now faces two challenges: First, the country has to start the economy again without triggering a new outbreak. On the other hand, there is now a danger that travelers from abroad will bring the disease back in again.

The corona virus is spreading globally. The pandemic has already affected over 180 countries. Of the approximately 1,426,000 people whose infection with the virus has been confirmed, around 300,000 are already cured, that is about 21 percent (as of April 7). Around 82,000 people worldwide have died of the disease. The number of people who are currently ill has risen sharply since the beginning of March.

1
Between February 12th and 18th, not only cases confirmed by tests but also those from clinical diagnoses were counted in Hubei Province.

The development can be divided into different phases: first the virus appeared in the Chinese province of Hubei, then it spread throughout the country and in other countries in the region. However, the number of confirmed cases in China has stabilized in the past month and most patients have recovered. The virus has now arrived in Europe and on other continents and is spreading further and further.

Whether or not a country copes well with the corona virus also depends on the level of preparation for a pandemic. A large-scale study that examines 195 countries in detail concludes that richer countries tend to respond better to an outbreak.

But even the United States, the country best prepared for a pandemic, is only rated 83.5 points and could therefore improve. Germany achieved 14th place with two thirds of the possible points. Many countries in Africa and the Middle East are particularly poorly prepared. Venezuela, where there has been a bad economic and supply crisis since 2013, is in a bad position.

North Korea is also in an unfortunate situation. If the virus arrives from one of the two heavily affected neighboring countries, China and South Korea, the population is at risk of disaster. Many North Koreans are malnourished and therefore weakened, while the country’s health system is on the ground.

In international comparison, Germany is in a very good position with regard to the number of intensive care beds. There are 34 beds for every 100,000 people, compared to only eight beds in Italy.

Germany is comparatively well off

The dangers of the corona virus
To find out about the dangers associated with the corona virus and current measures in Germany, visit the information website of the Robert Koch Institute. You can get in English on the World Health Organization (WHO) website. The NZZ has compiled all articles on the corona virus here. Everything about the symptoms and tips for everyday life can be found here.

Methodological note
This article is updated with figures from Johns Hopkins University (JHU). The JHU researchers collect the numbers from various sources and have them confirmed by official bodies (explained in detail here). All numbers refer only to the confirmed Corona cases in the respective countries. It can be assumed that the number of effective corona infected is higher everywhere. Scientists rely on government agencies to provide accurate information, which is not always guaranteed. In addition, nationally or regionally different procedures and a varying frequency of tests can have an impact on the comparability of the number of cases. The JHU figures show small gaps in some cases, individual values ​​from mid-March are affected, where the figures for the previous day are reported for some countries. Read more about how the NZZ uses corona virus data here.