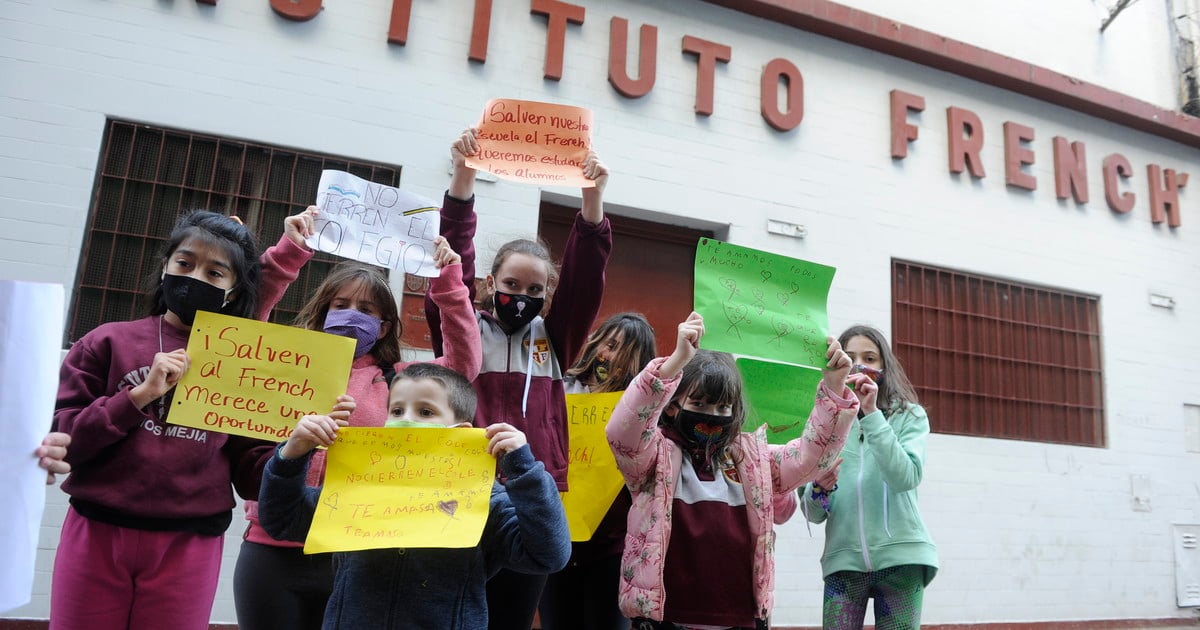 “The effects of the Covid19 pandemic pushed the economy to a limit of no return that prevents us from starting a new cycle responsibly and seriously ”, said the email that 500 families from Ramos Mejía received this morning, in La Matanza. The French Institute, a private school in the heart of the district, announced that it will close starting in 2021, after 56 years of uninterrupted education.

There was no communication by zoom, no meetings, no phone calls and the school remains closed for the quarantine by coronavirus, both parents and teachers complain. “We didn’t deserve to find out like this through a cold email two months after the end of the year, “says María Cecilia Rodríguez, mother of a fourth-grade boy.

“The school had not communicated at any time that it had financial problems. What’s more, a few weeks ago they sent us a survey to reserve vacancies for the 2021 cycle, where they asked us if the boys had siblings who wanted to go to school, “Rodríguez told Clarion.

Joaquín, who has been in school for five years, from room of 4, still don’t know anything. “Now, it’s all very complicated, I don’t know what we’re going to do,” says his mother, “because if school continues, I want my son to continue there because of the excellent teaching staff. But I also do not know if there will be a vacancy in other schools. It’s all very uncertain. “

The families of the French Institute, in Ramos Mejía, learned of the closure by email. Photo: Juan Manuel Foglia

The French Institute decided to communicate to the families by email the decision not to open the registration for next year: “We have faced serious financial difficulties for several years, and yet we always put our best effort to continue with the educational work. But this year, the effects of the Covid19 Pandemic took our economy to a limit of no return, which prevents us from starting a new school year responsibly and seriously “.

Along these lines, he details that in 2020 the year began with “a very low enrollment” in relation to the average student body “due in large part to the onslaught of the economic crises” in the country. But they were preventive isolation measures to prevent coronavirus infections, which “limited the collection and generated a progressive and uncontrollable delinquency in the collection of fees, reaching a reduction of more than 50%,” the statement said.

For the institution, one of the reasons for these payment problems was that from the families “it was not understood that the Institution should continue to pay all its obligations, although education was not face-to-face “.

“All of this led to a situation of unsustainable debt and the projections for next year show a worse picture“, said the authorities in the mail, addressed to the families of the more than 500 students that make up the school.

1964. The year in which the French Institute opened, in Ramos Mejía, which announced that it will not continue working in 2021. More than 500 students must find where to continue studying. Photo: Juan Manuel Foglia.

The email to the faculty raised some differences. The text assures that the institution still does not contemplate any dismissal because it is waiting for how efforts will evolve before authorities of the Province of Buenos Aires and the Nation.

“We are all shocked,” he told Clarion Jimena Krywdik, a teacher at the French Institute and mother of two boys who are students of the institution. He learned of the closure since 2021 through the two emails: “As teachers, communication left an open door that they were waiting for help, while as parents, they already said that they had not enrolled from next year “.

For Krywdik, who has been working at the school for 13 years, “is a strategy” of the owners of the educational company “so that parents can take the kids out of school and then be able to close because they don’t have students.”

“The kids are left without school at this point when everyone asked for a vacancy for all schools and the teachers are desperate, because we are left without work in the midst of the pandemic and when the State is no longer opening charges. It’s a disaster, “he said.

Andrea Fabiana Amalfitani, another teacher at the school, pointed to Clarion what The institution receives an 80% subsidy from the State at the secondary level, 60% at the primary level and “for the unsubsidized, you are receiving ATP.”

Until today it had not arrived, he says, no prior communication, although yes they were being paid “irregularly.” One part was paid by the State, through the IFE, and the other was paid by the school in installments, the teacher details.

“We feel emotionally, psychologically and mentally dismantled,” defined Amalfitani. “We teach classes in pandemic without losing contact with any of the students, we accompany families of all realities, we train, we are the visible face of the school and this is very hard for us.”