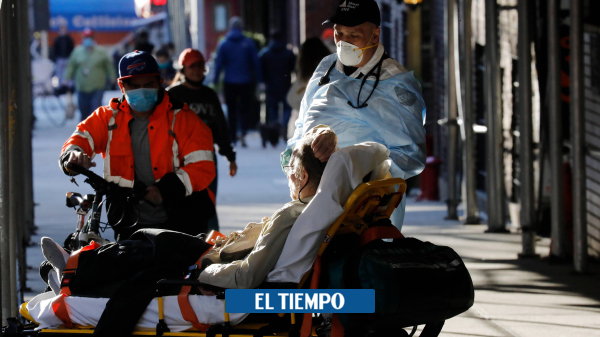 George Contreras, a paramedic at a private New York hospital, during his 30-year career, had never “seen so many people die on a shift, day by day.” He also did not think that the ambulance in which he is transported was going to be the scene of farewells between relatives and their relatives recently deceased by coronavirus.

In the story told by the American newspaper Daily newsContreras affirms that what has changed the most is that now “we have a dark duty to declare the person dead at home.” Before the pandemic struck, he was responsible for administering medications, intravenous therapy, and intubating patients. With the coronavirus, he spends his days doing constant resuscitations.

(It may interest you: The therapy that cured a covid-19 infected is investigated in the country)

I never thought that my ambulance would become a funeral home

The paramedic starts his 12-hour shift at 7 p.m. m. “Usually, New York City has about 4,000 calls a day to 911. In these weeks we have seen days that have had more than 7,200 calls per day“Says the American, the son of Ecuadorian parents, for the media Voice of america.

“I’ve never seen so many people die in one shift.”

George Contreras describes the nightmare reality he faces as an NYC paramedic, which includes holding an “ad hoc wake” in an ambulance for a coronavirus victim.https: //t.co/1SADBnhj5U

While in the first five days of April 2019, 131 deaths were reported in New York, this year, in the same period, 1,125 were announced, says George.

The procedure is tragic for him: if after the resuscitation the patient does not improve, they have to leave him where they found him and cannot transport him to the hospital.

The paramedic clearly remembers a time when a man had been infected for two weeks and refused to let his family call 911, because he wanted to stay home. The day came when he could no longer breathe and he had risen breathless. His family called 911. Contreras arrived, the man stopped breathing and also lost his pulse. He tried to revive him, but it was not possible and he died in the back of his ambulance.

(It may interest you: How did Tunja manage to put a fence around the coronavirus?)

The man was approximately 70 years old. He was a member of a tight-knit Latino family who was circling the car waiting to find out what was wrong with him. “I had the responsibility to tell them that we did the best we could, but that he was dead,” Contreras says.

The next step for the deceased was the morgue, and that would be the last time his family could see him, in at least two weeks. The anguish of about 20 people who were waiting shocked the paramedic, who allowed them to say goodbye to the man in the distance. “I never thought that my ambulance would become a funeral home,” says George. From outside he came to hear the screams and cries of the relatives.

Emotions began to invade him. He began to size that since the beginning of this pandemic he has seen people living in small places, all in the same room: boys and girls, grandparents and parents.

You are concerned that the citizens who are dying are not just numbers. Each is a person, and his death represents an impact on his circle of family and friends, which could be 100, 200, 500 people, says George.

(It may interest you: What do I do if they impose a summons for violating the quarantine?)

The paramedic confesses that for the health personnel this situation has been very overwhelming in mental and emotional terms. “There is a very human aspect to this, what they called the ‘invisible enemy,’ but it is not very invisible. Has face. It has a name, ”says George.

New York is the most pandemic-stricken city in the United States. As of April 29, 17,682 deaths were reported there and 844,994 infections. The United States continues to lead the list of the highest number of infections in the world, with a total of 1,013,168.