ROMA.- From virtual lepers of Europe, to virtuous. Having been the first country in the West to be plagued by the new coronavirus, seven months after the start of a nightmare that became global, Italy begins to feel pride.

In recent days, several renowned publications, among which the Financial Times and the American magazine Foreign Policy, in separate articles they praised the country for its handling of the health crisis and for the discipline of its inhabitants.

For the prestigious British newspaper, The “hard lesson” learned during the explosion of the pandemic – which broke out on February 21 and so far caused 35,781 deaths – allowed Italy to “keep the second wave” of the virus under control.

“While Spain, France and the United Kingdom suffer an outbreak of Covid-19, the country has managed to adapt after the first and brutal phase,” he wrote.

The experts consulted by the financial newspaper identified “three main reasons” for the Italian “resilience”. The first has to do with the fact that since Italy was the first country in Europe to face the emergency, “The health system and the government had more time to plan the post-lockdown phase and the relaxation of restrictive measures was more gradual” with respect to other countries, something that “allowed greater agility in reintroducing restrictions where necessary.”

Another reason for success was “the high adherence of citizens” to the rules imposed with the pandemic and the “severe controls” by the authorities. The third reason is that Italy managed to an “effective” testing and monitoring system, so “there is confidence that Italy’s efforts can continue to keep the virus under control.”

An article from the American geopolitics magazine Foreign Policy spun finer. He recalled, in effect, that at the beginning of the hecatomb caused by the coronavirus, several prestigious newspapers, among which, The New York Times, wrote articles about the collapse of the Italian health system and the procession of military trucks taking coffins from the city of Bergamo, which exuded a certain sense of superiority.

“The global shock on the tragic fate of Italy reflected a sense of superiority: disorganized Italians were mishandling the crisis, surely, but the rest of us would know what to do,” he wrote Foreign Policy. “Half a year later, the Italians were not only able to lower their contagion rate to the level of the best in Europe, such as Germany and Finland, but also managed to achieve a mortality rate comparable to that of Germans and Finns.”added.

The article of Foreign Policy highlighted that in recent days the international airport of Fiumicino, in this capital, was distinguished by Skytrax as the world’s first “five-star Covid-19” for its cleanliness and for how passengers arriving from certain destinations can be carried out without problems a rapid swab test. Something that also happens in other airports, ports and train stations on the peninsula.

He stressed, on the other hand, that in Italy last weekend they held the first elections of the coronavirus era without problems – it was voted in a referendum to reduce the number of parliamentarians and renew authorities in seven regions – with high participation, despite fear and in the midst of anti-coronavirus measures never before seen in an electoral appointment. 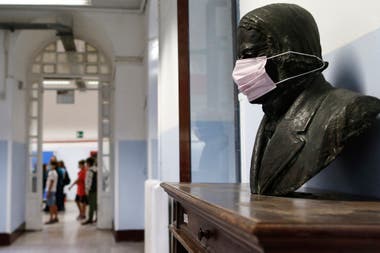 Back to school is part of the new Italian normality Source: AFP

Furthermore, recognizing certain typical prejudices about chaotic Italy, praised the discipline of the population, who not only understood that there was an emergency and therefore the restrictions had to be respected, but also, perhaps thanks to his experience in catastrophes such as earthquakes, reacted in a constructive and supportive way, with a series of “informal initiatives that were more successful than those carried out by countries that are better organized.” Among them, the networks of young people in the neighborhood who did the shopping for the elderly, for example.

How could it be otherwise, these accolades from abroad had a great impact in Italy, where, beyond the tragedy and an unprecedented economic crisis, there is a certain pride in finally being seen as “pioneers” in the fight against the coronavirus. A battle that, everyone agrees, is still very far from being won – 1786 new cases were registered today, in a worrying trend of increasing contagion – although, at the moment, under control.

“We are not out of the health emergency, we are still called to act safely for the good of ourselves and those who are by our side. But we are proud of the fact that everyone’s commitment has served and will serve to save lives,” he tweeted. Democratic Party (PD, in power in a coalition with the Five Star Movement), along with an image with the news of the Financial Times that “approves Italy with high marks.”

The president of Italy himself, Sergio Mattarella, echoed this new climate of pride, saying today that “Italians also love freedom, but also seriousness.” Mattarella spoke these words when reversing the words of the British Prime Minister, Boris Johnson, who a few days ago, when giving explanations to Parliament about the boom in infections in his country, denied that it was the fault of bad management, but explained that the difference with Germans and Italians it is that “we British love freedom”.