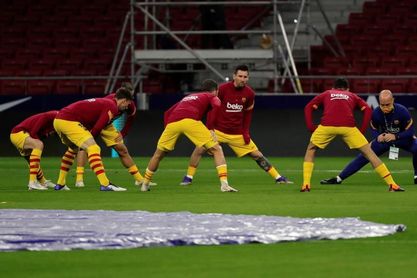 Madrid, Nov 21 (EFE) .- Diego Simeone, coach of Atlético de Madrid, leaves with the scheduled eleven, with Joao Félix and Ángel Correa in attack and Diego Costa as a substitute, while Ronald Koeman, his counterpart in Barcelona, ​​replaces the loss of Sergio Busquets with the ownership of Miralem Pjanic and lines up Pedri and Sergi Roberto at the start and not Phillipe Coutinho at the Wanda Metropolitano stadium.

The Barça eleven is made up of Marc Andre Ter Stegen as goalkeeper, with Sergi Roberto, Gerard Piqué, Clement Lenglet and Jordi Alba in defense; Ousmane Dembele, Miralem Pjanic, Frenkie De Jong and Pedri, in midfield; and Antoine Griezmann and Lionel Messi, in the front of the attack. Coutinho starts on the bench, after a month off due to injury.

The same thing happens to Diego Costa at Atlético, who goes out with Jan Oblak, in goal; Kieran Trippier, Stefan Savic, José María Giménez and Mario Hermoso, on defense; Marcos Llorente, Saúl Ñíguez, Koke Resurrección and Yannick Carrasco, in the center of the field; and Ángel Correa and Joao Félix, up front.