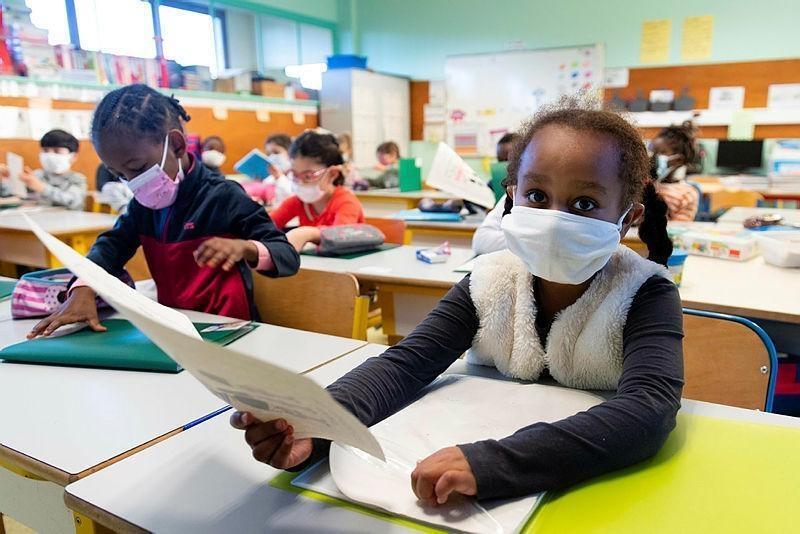 The government announced it on Wednesday 22 September after the Council of Ministers. From October 4, and in the departments where the incidence rate stabilizes below the threshold of 50 per 100,000 inhabitants, “ the health protocol will go to level 1, which essentially means that the obligation to wear a mask in primary school will be lifted ”. A decision that is debated and which has aroused many reactions from scientists who fear a resumption of the epidemic of Covid-19.

What do the latest studies on the subject say? In the United States, where the return to school took place between mid-July and mid-August depending on the state, the results of two new searches on the issue were published last night, Friday, September 24, by the Centers for Disease Control and Prevention (CDC) and relayed by the Parisian .

From October 4, and in the departments where the incidence rate stabilizes below the threshold of 50 per 100,000 inhabitants, the health protocol will go to level 1, which essentially means that the obligation to wear a mask in primary school will be waived. © Photo: Ouest-France

The first one who studied the situation in a thousand schools in two counties in Arizona, found that those that do not require the wearing of the mask are 3.5 times more likely to create a cluster. To arrive at this result, the researchers divided the establishments into three groups: those where facial protection was imposed from the start of the school year to students and staff (210 in total), those who decided it later (309 schools ) and those where the mask was not compulsory (480 schools).

To arrive at this probability, they counted the number of outbreaks in school in each situation. Thus out of the 191 clusters or beginnings of clusters identified (from two cases of contamination), they counted 16 in establishments requiring the mask since the start of the school year, 62 in those which adopted it later, and 113 which did not. have never imposed this measure.

New @CDCMMWR finds schools in two Arizona counties w/o a mask requirement were 3.5 times more likely to have a #COVID19 outbreak than schools requiring masks from the start of the school year. CDC recommends universal masking for all K–12 schools. More: https://t.co/suuuLNItxJ. pic.twitter.com/zYYqXoLH3j

Higher incidence rates without a mask

The second study she looked at the incidence rate according to the measures taken in schools, during the two weeks following the start of the school year. Here again, the results plead in favor of wearing a mask. This research focused this time on 520 American counties where the same rules were imposed and not on schools.

The authors thus wanted to verify whether the incidence rate among pupils varied according to the obligation (or not) to wear a mask at school. Conclusion: the number of cases of covid-19 in children increased everywhere after the start of the school year but even more in counties where masks were not mandatory: nearly 35 cases per 100,000 inhabitants against 16 per 100,000 in the counties where the children were masked. To arrive at these rates, the scientists adjusted their data taking into account several other factors in the different counties: ages of the children, population densities or even the vaccination rate or social data on the population (percentage of insured persons, etc.).

See also  Headache and loss of sense of smell, the most common symptoms of the COVID-19-in Europe | COVID-19 | News | Law

Results to be taken with caution

If they support the arguments of the American health agencies in favor of maintaining the mask in schools, these two American studies are not really transposable to the French case. For several reasons. On the one hand, because they relate to American schools in the broad sense (“schools”). They include establishments up to grade 12 of the American education system, i.e. primary schools but also colleges and high schools.

But in France, the decision to lift the wearing of masks currently only concerns primary schools. As a reminder, the mask is currently compulsory from the first grade in primary schools, i.e. from the age of 6 years. And last June, the measure had already been relaxed, allowing children to remove the mask outside, in the playground.

The second study also has several limitations, the researchers say. For them, the lack of obligation to wear a mask cannot be considered as the only cause of the resumption of the epidemic in certain establishments. Even though, the study authors subjected their results to several other variables, for example they did not take into account the vaccination rate of teachers. On the other hand, in some counties the samples were too small to make a generalization.

Finally, the American epidemic recovery in schools can hardly be a textbook case for France, because in our country, the start of the school year has so far not rhymed with an outbreak of Covid-19 cases as some specialists feared in France. the start of the school year. According to the Ministry of Education, the number of classes closed due to the epidemic is even in sharp decline. The Ministry of National Education announced that 2,366 classes were closed Thursday, September 23, nearly 1,000 classes less compared to last week.

See also  Börse Express - Is this a breakthrough against the corona virus?