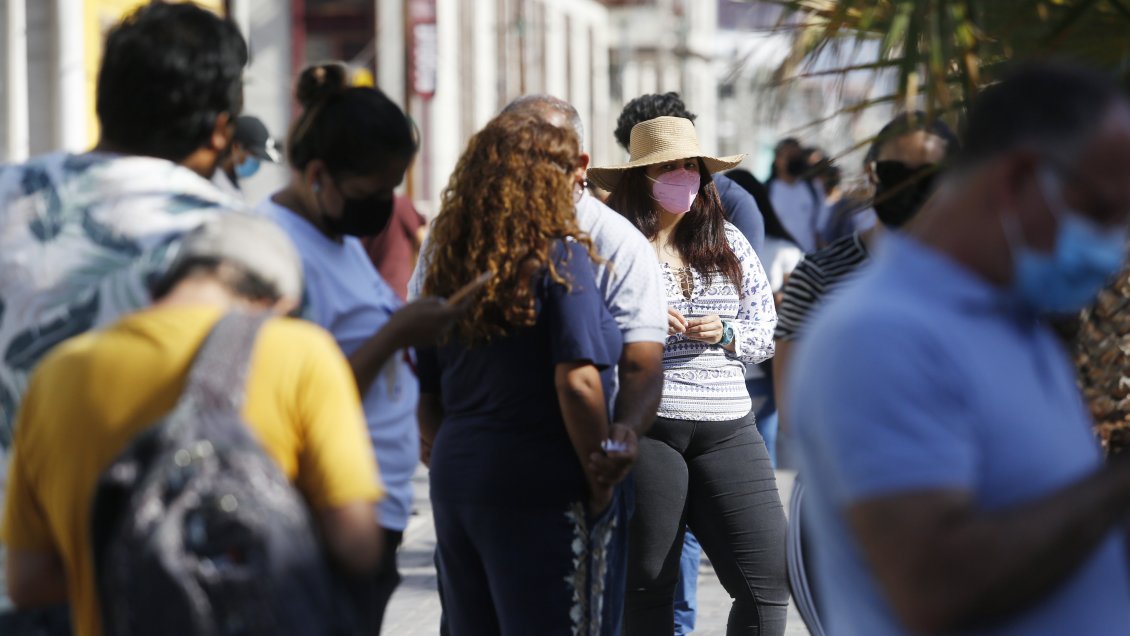 The Ministry of Health reported this Thursday a total of 7,291 new cases of Covid-19, this is three thousand more cases than those reported yesterday and the highest figure since last June 13.

In its daily balance, the authority confirmed that 95,967 PCR tests and antigen tests were carried out, a figure considerably higher than that of Wednesday, which influenced the increase in cases.

The total number of people who have been diagnosed with Covid-19 in the country reaches 1,849,465. Of that total, 32,483 patients are in the active stage.

The national positivity to date is 6.90 percent, while in the Metropolitan Region is 7.39 percent and no region registers less than 2 percent positivity.

The variation of new confirmed cases at the national level is 154 and 158 percent for the comparison of seven and 14 days, respectively.

According to sample collection, the regions with the highest positivity in the last week are Tarapacá, Arica and Parinacota, Magallanes and Antofagasta. Meanwhile, the Tarapacá region has the highest current incidence rate per 100 thousand inhabitants, followed by the regions of Arica and Parinacota, Magallanes and Antofagasta.

According to the information provided by the DEIS, In the last 24 hours, 41 deaths were registered due to causes associated with Covid-19. The total number of deceased amounts to 39,331 in the country.

To the date, 444 people are hospitalized in Intensive Care Units, of which 366 are supported by mechanical ventilation. Regarding the Integrated Health Network, there are a total of 254 critical beds available.

The Minister(s) of Health Maria Theresa Valenzuela warned that the infections will continue to rise and that we must prepare “for the coming weeks that can be very hard”. In this way, he insisted on the call to “get vaccinated with your booster doses or fourth dose, as appropriate”.

“Still there are more than a million people left behind who have not yet been vaccinated with their first booster dose and it’s been six months since his last dose,” he said.

In this line, the dean of the Autonomous University and former coordinator of critical beds of the Minsal, Luis Castillo, indicated that “for the next few days the number of active cases, of infections, should increase, for the next week exactly the same. Yesterday we had 4,000, today we had 7,000, we’re probably going to be around 8,000 to 10,000 starting next week. What is it that we should do? exercise extreme care and reduce or responsibly use all meetings, with the capacity that the health authority has allowed; be tested in case of symptoms to protect those closest to you“.

REINFORCEMENTS TO THE HEALTH SYSTEM IN THE NEW WAVE

The Undersecretary of Healthcare Networks, Albert Dougnac, he referred to the uncertainty of the medical union in hospital matters, before the new wave that affects the country.

“We are going to extend the hours of attention, separate patients with respiratory conditions from general conditions, we are going to implement the long-term observation units again,” the undersecretary promised.

In addition, he explained that they will reactivate “the integrated emergency network” and that a week ago they have implemented “the strategy of increasing critical beds.” And he pointed out that “for all these strategies” “human resources will be needed to be able to face it”, who are “necessary and indispensable” for the response to needs.

To stop the increase in contagion, self-care, vaccination, and enhance the tools to control the pandemic, such as traceability, must be reinforced, a point that has had setbacks in the last month.

The former Undersecretary of Public Health, lydia amarales, He said that “it is very important maintain professional team to do traceability”. He also classified as “essential to set up the system that we had at some point”, to resume “the traceability that was satisfactory at one point”.

Felipe Elorrieta, head of the mathematical epidemiological group of the Usach analyzed the traceability indexes and the drop in the last weeks of the indicator from 4.7 to 3.4. “Now we only find 3.4 for every confirmed case,” he said, noting that the WHO recommends at least 5.”

“Although at some point we were close to that level, now we are already quite far away”, which explains whye “in an increase in infections it becomes more difficult to maintain traceability”.

“The strategies in this sense have not been very good,” he considered, adding that “the traceability teams have been dismantled.” In this context, the mathematician said that “those traceability teams that were weakened would now be very useful to us“.