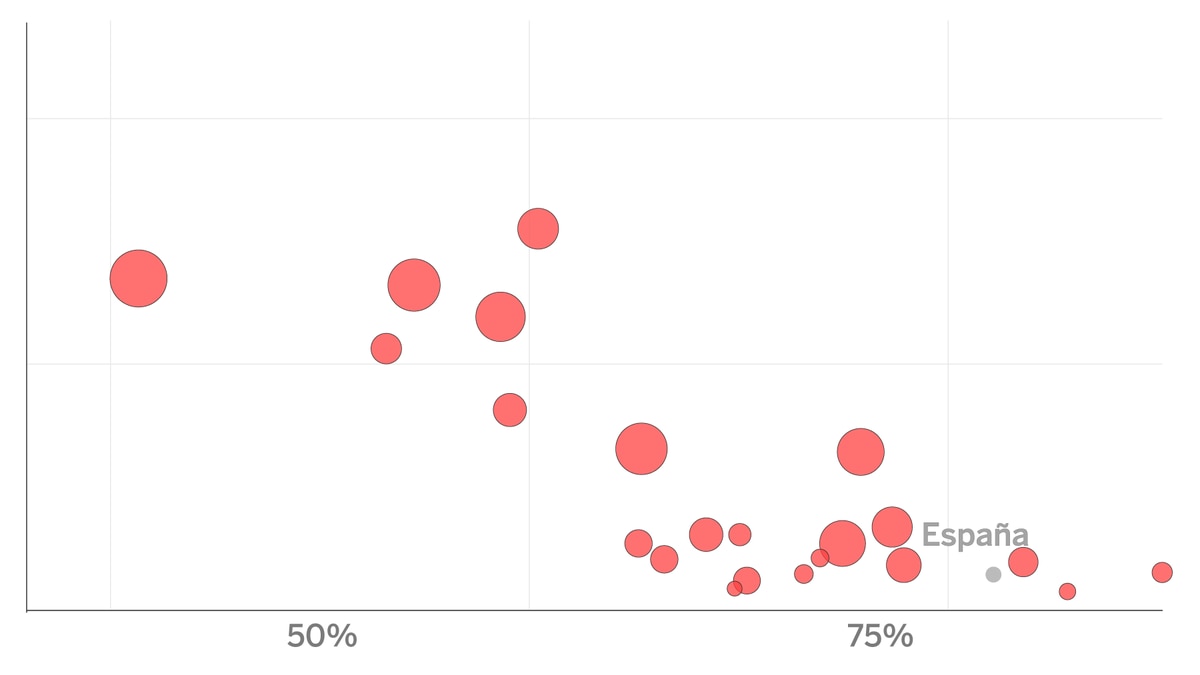 The new wave of coronavirus seems to be dividing European countries into two leagues: those that, despite the spike in infections, keep their hospitals under control and those that are not. The data suggest that places with more than 75% -80% of the total population vaccinated are better resisting the new increase in cases; while others, with only 10 points less vaccination, have had to resort to drastic measures before the imminent collapse of its health centers. Even so, the numbers of some countries such as Belgium —with immunized figures close to those of Spain—, and the strength of the new wave (waiting to know the scope of the new variant) invite caution in the face of the increase in hospitalizations in several communities: in Aragon or Navarra, those admitted for covid have doubled in the last month.

Contagions on the continent have begun to grow at different times and at different rates. In the Baltic countries or in Bulgaria and Romania, cases appear to have exceeded the peak and are decreasing in the dynamics to which the pandemic usually responds. In Slovakia, Slovenia, Austria or the Netherlands, the identified positives have reached levels never seen in the last two years. Germany too has set a record of infections and covid patients have once again altered the normality of health centers. In Spain, Italy or Denmark, the cases have rebounded later and at a slower rate for the moment.

In recent months, the hospitalized indicator is even more important, since the vaccine prevents the severity of the disease and the infections alone do not cover the real magnitude of the wave. This figure is of concern in some countries. In Bulgaria, the situation is critical: 100 out of every 100,000 inhabitants are hospitalized for covid – almost twice as much as in the worst moment in Spain after last Christmas. In Slovakia or Slovenia, on the way to their peak, incomes have been growing for weeks and hospitalized patients have risen to 45 per 100,000 inhabitants, figures close to those registered on their worst days, last winter. Slovakia (55), Czech Republic (49) and Poland (44) also have worrying trends. In the Netherlands, Denmark, Italy, Portugal or Spain, the number of hospitalized patients has also started to grow, although apparently at a slower pace. In none of them does the incidence of admitted persons exceed 10 per 100,000 inhabitants.

In this scenario, what role are vaccines playing? Poland and Denmark represent a good example. The incidences of contagion are similar, but in Polish hospitals six times more patients with covid are admitted than in Danish hospitals. Denmark’s extraordinary ability to detect almost all the cases out there is likely to play a role (a positivity of 2.4%, compared to 24% in Poland), but the different vaccination coverage in these countries also matters: in Denmark 76% of the population has received two doses; in Poland, they barely exceed 50%.

This pattern is repeated in more countries, the more people are fully vaccinated, the lower the incidence in hospitals. This is what can be seen in the following graph: countries such as Slovakia, Slovenia or Hungary, with around 50% of the population vaccinated, have a higher number of admitted than countries with greater coverage such as the Netherlands or Belgium, which have already immunized more than 70% of its inhabitants.

It should not be forgotten that these countries with fewer vaccinated have suffered a greater wave of infections (the size of the point in the graph indicates this) and this has caused a greater number of hospitalized. But it is also true that in countries with a similar number of cases, hospitals have suffered more where vaccination coverage was lower, something that is observed when comparing France with Denmark.

Enric Álvarez, researcher from the Barcelona Computational Biology and Complex Systems group, points out that “in countries with 75% or more of the vaccinated population, it seems that incidences close to 1,000 cases per 100,000 inhabitants in 14 days, something that does happen in countries with 10 points less, such as Austria, Slovakia or Slovenia ”. On the opposite side, he explains, is Denmark: “Which is the country we hope to be more like.”

It is seen, for the moment, that the countries with the most vaccinated have emptier hospitals, people suffer from the disease in a less serious way. As the epidemiologist Óscar Zurriaga points out, “it may not seem like a huge difference, but going from 65% to 80% of vaccinated is millions of people, it is a lot of people. Furthermore, they are not always distributed by age in a homogeneous way as in Spain: this allows the circulation not to be focused on certain bands ”.

Spain – lower right in the graph above – is a good example of this relationship. But there are exceptions, such as Belgium, which with 75% of the vaccinated population has the same number of hospitalized per 100,000 inhabitants as Austria. In other words, if the incidence doubles, the number of patients in hospitals inevitably increases.

The vaccine alone is not enough to explain these differences. First, because its effectiveness decreases over time. “Different scenarios of decrease in effectiveness are being considered. If vaccines continue on their downward trajectory when it comes to stopping transmission, of course the situation in infections and hospitalized patients can rise again, ”Álvarez recalls.

Seasonal behavior also matters: where the cold comes first, as in central Europe, life moves back indoors, and there it is easier for infections to occur. Finally, as Ortiz recalls, “the relaxation of measures, which has been faster in other countries, has greatly influenced the trend of some contagion curves.”

The gradual lowering of these restrictions will surely also influence the fact that the situation in Spain is far from that of other European countries. In addition, extensive vaccination could protect against a new wave of hospitalizations.

Even so, the situation is tense and in recent days the data has worsened in most of the autonomous communities. In Aragon and Navarra the number of admitted patients has doubled in the last four weeks. In Catalonia, in the last week the incidence figures for people between 60 and 80 years of age have worsened, something that has caused a significant increase in hospital occupancy.

“The fact that there are communities rising is the demonstration of something that we already knew: the vaccine is not enough to eliminate transmission,” recalls epidemiologist Óscar Zurriaga. “That is why it is not convenient to bet everything on the third dose: if it prevented transmission, it would be key to put it, but it is not the case. Three concepts are still key: ventilation, masks and vaccines ”, he adds.

Even taking these increases into account, the situation is far from what it was a year ago. Catalonia now has an incidence of cases similar to that of the beginning of October 2020, more than 220 per 100,000 inhabitants within 14 days. It reported back then, also with infections on the rise, more than 1,500 admitted to its hospitals: today there are almost half, 720. The Basque Country had 520 admitted then, with a curve similar to that of now, when it has less than half of covid patients (224).