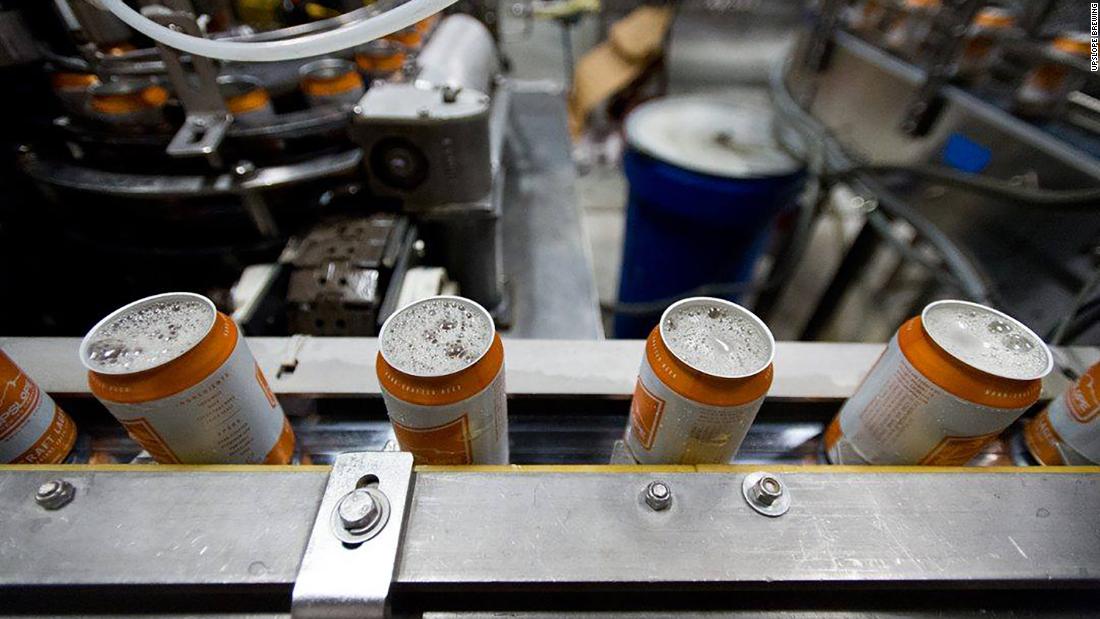 Craft beer could get even more expensive 0:55

(CNN Business) — Your next can of craft beer could be a lot more expensive.

Ball Corp., one of the world’s largest aluminum can suppliers, caused a stir in the craft beer world by increasing the minimum number of cans certain producers must order and saying it will increase prices.

Ball said it will now require non-contract customers – which includes many smaller breweries – to order no fewer than five trucks (roughly 1.02 million cans) for each of its beverages as of January 1. The previous minimum purchase was one truck per product.

The news has many small and regional breweries scrambling to insure cans and has prompted fears of higher costs, reduced variety and higher prices for consumers.

Hawaii-based Maui Brewing got the news from Ball Corp. this month. The minimum purchase of aluminum cans will be quintupled.

“I see this as an economic murder for some, and certainly most small brewers will have to raise prices significantly or rethink all of their models,” said Garrett Marrero, CEO and co-founder of Maui Brewing Co. in Hawaii.

The tight-knit craft beer industry has been recovering of restaurant and tavern closures caused by the pandemic, inflationary pressures, the shortage of cans and other supply chain disruptions.

Then, just over a week ago, Ball’s ads landed on the inboxes of hundreds of craft brewers across the country, according to the Brewers Association, the trade organization that represents small, independent brewers. The Denver Westword was the first to report on Ball’s purchase minimums.

In the letters, copies of which were delivered to CNN Business, Ball wrote that demand for aluminum may continue to outstrip supply.

“Ball makes investments to bring additional capacity online and in the meantime, we remain in a very tight supply environment for the foreseeable future,” according to the letter. “This environment makes it difficult for us to deliver the quality experience our customers have come to expect from Ball, and we are making some adjustments to the way we do business to remedy that.”

With less than six weeks until the New Year, hundreds of craft brewers will no longer be able to purchase their pre-printed cans directly from Ball and will instead have to secure one of the most critical components of their business from new sources, said Bob Pease, President and CEO of the Brewers Association.

“This is still fairly new, so we are still trying to gather information from our members who are being affected,” Pease told CNN Business.

The Brewers Association is reviewing its options and considering reaching out to lawmakers, Pease said, and looked forward to speaking with executives at Ball, who is a longtime member, he added. On Friday, Pease said he received a response from Ball’s senior staff, and the two sides are working to set up a meeting in December to discuss the recent changes.

“The new model will increase our overall efficiency and allow us to produce more cans for our contract customers, including craft brewers,” Ball spokesman Scott McCarty wrote in an email.

McCarty added that Ball is building five plants in the United States to produce more cans, adding that “every year, we assess supply and demand and we will continue to invest where it makes sense.”

For potential solutions for customers who were unable to meet the high minimums, Ball offered contact information for four distributors who could accept smaller orders, provide storage, and offer labeling options such as stickers and shrink wrap.

“It will force us into bankruptcy”

When the Upslope Brewing Company launched in Boulder, Colorado in 2008, it was one of the few craft brewers to pack its beer solely in aluminum cans.

“My first phone call to order cans was to Ball,” co-founder Matt Cutter told CNN Business. “They said, ‘Okay, you can buy a full truck.’

That wasn’t feasible then for Upslope, a company whose seed money came from the second mortgage on Cutter’s house. But a few years later, when Upslope beer was being consumed throughout the Mountain West region, it was certainly possible.

Upslope Brewing Co., based in Boulder, Colorado, is a longtime Ball customer who probably won’t be able to meet the higher purchase minimums.

“And Ball kept knocking on our door,” he said.

Ball, also a Colorado-based company, had a can making facility just down the road and offered services like cheaper warehousing and shipping. Upslope, who has bought his cans by truck from Ball since 2014, now feels left out in the cold.

Cutter fears that higher costs, including raw materials, storage, and any added margin from working with new distributors, could ultimately lead to six-packs of craft beers sold in stores to be between $ 1 and $ 1. $ 2 more expensive for next spring.

Ultimately, he said, these higher costs might not be sustainable for smaller companies.

Cutter said that as craft brewers they don’t have money to spare. “We can’t absorb this. It will force us out of business.”

In Pueblo, Colorado, one of the co-founders of Walter Brewing Co. was desperately trying to catch up on what Ball’s plans may mean for his brewery.

Walter Brewing has purchased cans for its Walter’s Original Pilsner and Walter’s Pueblo Chile beer from groups that buy from Ball, as well as directly from Ball.

“It would take us over a year to go through [un camión]”said Andy Sanchez, one of the co-owners of Walter Brewing.

The five recently required loaded trucks are out of the question.

“With six weeks notice, it’s a lot to digest in such a short amount of time,” Sanchez said. “It would be crucial for all small breweries if Ball reconsidered the path and maybe thought of a way to mitigate short-term impacts.”

Walter Brewing Co., in Pueblo, Colorado, packages its beer in cans from Ball Corp. Co-owner Andy Sanchez said he is trying to determine how his brewery will be affected by higher purchase minimums.

Maui Brewing, due to its scope of operations in Hawaii and its close relationships with Ball’s plant there, should be relatively insulated from major disruptions, Marrero said. However, he fears that mainland breweries and Maui Brewing’s efforts to expand production there will face complications.

He worries that breweries that cannot float costs to switch suppliers will be forced to change their operations, close or consolidate. He said he is also concerned that this could lead to more use of less sustainable materials, such as plastic labels.

“This is going to create a paradigm shift in the advancement of craft beer,” he noted.