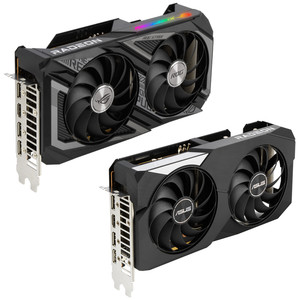 The biggest advantage of ASUS DUAL Radeon RX 6600 XT O8G D6 8GB and ASUS ROG STRIX Radeon RX 6600 XT O8G GAMING D6 8GB is that ASUS unique cooling technology is added to support a quieter and more stable gaming environment. The key is the improved Axial-tech fan. With 11 increased fan blades and a larger surface area, the bearings on the side fans have been thinner to increase suction and improve airflow. The two Axial-tech fans applied to the graphic card deliver compressed air to the main areas, effectively lowering the temperature even with low noise, providing a stable gaming environment even in high-spec games for a long time.

Intelligent ‘0dB technology’ is also applied to eliminate unnecessary noise. When the GPU temperature drops below 50 degrees and power consumption is low, the fan automatically stops to reduce noise. This supports a more pleasant gaming environment and also improves the lifespan of the fan cooler.

The rear design of the graphic card has also been improved for a stable gaming environment. The back of the card is reinforced with an aluminum back plate to protect components and substrates and prevent warping. In addition, the GPU bracket provides a stable connection between the board and the heat spreader with uniform mounting pressure, and the I/O bracket is finished with stainless metal to provide a corrosion-resistant and secure mount to protect ports.

A tuning utility ‘ASUS GPU Tweak II’ that can maximize system performance is also provided. In addition to supporting various modes such as overclocking, gaming, and low noise, it is possible to improve performance by setting the clock and voltage of GPU and memory, and includes various functions to make the most of the graphics card, such as real-time monitoring and cooling fan control.

ASUS DUAL Radeon RX 6600 XT O8G D6 8GB and ASUS ROG STRIX Radeon RX 6600 XT O8G GAMING D6 8GB have 2048 stream processors, and the core clock is an overclocked edition model that operates at up to 2607Mhz when boosted. In addition, one HDMI 2.1 port and three Display Port 1.4 are supported, so you can use up to four monitors.

A Daewon CTS official said, “AMD Radeon RX 6600 XT is a mainstream graphics card that is expected to set a new standard for 1080p gaming by providing superior gaming performance compared to competing models. The two new products with the high reliability and quality that ASUS has shown, such as strict management, will be good news for many consumers who enjoy games at this time when the issue of purchasing graphics cards is high.”