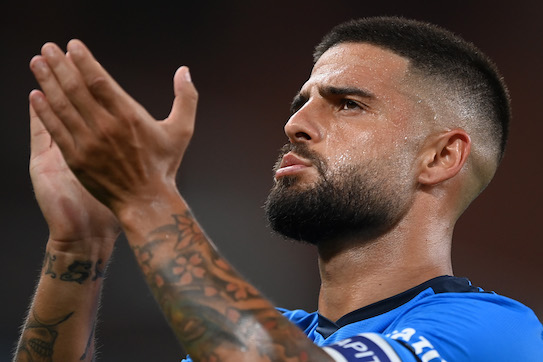 The coach has already shown with Totti and Icardi that he is not the type to be intimidated. Perhaps it is appropriate to think of another penalty taker

Cesare – Dear Guido, we greet the leaders. Napoli first in the standings with 7 wins out of 7 games. This time the match was tough but deservedly won. The blue team has conceded to the opponents in addition to the goal only a couple of shots safely saved by Ospina and in addition to the two goals scored had some important opportunities (Lozano at the beginning, the beautiful overhead of Osimhen came out a little with the opposing goalkeeper stopped, Elmas in the second half with a great assist from Osimhen).

Guido – I think we went into difficulty in the first half hour of the first half because we could not play under the obsessive pressure of the viola who ran more than us (we remember incidentally that the viola have the limit of collapsing in the second half.) Then … Spallettian scheme with the ball in the dark in depth by Fabian Ruiz for Osimhen who determined the penalty foul. In the second half match under control of Napoli who fought and blocked Fiorentina.

Cesare – In defense monumental proof of Koulibaly who dominated and an excellent match by Rrahmani, who also scored a great header from a free-kick. On which you can see the hand of the coach who piloted the punishment by surprisingly knocking Zielinski in implementation of an evidently prepared scheme. I did not like Vlahovic’s marking on purple corners with an assist for the goal of their advantage and two opportunities, marking Napoli in the zone he was positioned on the far post in a slightly backward position looking for the weak marking of Fabian Ruiz.

Guido – Speaking of defense, I, Merettiano convinced, must agree that Ospina gives great safety both in the goalposts and in the exits and is a reference for his defenders in the construction from below. I think he has become an immovable holder for Spalletti.

Cesare – In midfield, Anguissa’s performance was less brilliant than usual in the first half. Then in the second half he played a great game. Zielinski was the author, as in the cup, of a colorless and evanescent test even if he had the merit (the only good thing of his game) of having kicked a great free-kick on Rrahmani’s goal.

Guido – In attack usual great performance of “Iradiddio” Oshimen who has become the bugbear of the opposing defenses. In my opinion it is worth half of Naples alone. He thinks that he also gives a great hand in defense, not only with the first pressing on the goalkeeper or the defender who first plays the ball, but also with an important contribution with the headers on the opponent’s set pieces. It also continually motivates and encourages peers. Good performance both for Lozano and then for Politano.

Cesare – Insigne deserves a separate consideration: apart from the fact that in 7 matches he missed two penalties that could have cost us dearly (with Venezia and today with Fiorentina and here Spalletti should start to think of an alternative from 11 meters), today after a dull test he fell back into old vices by protesting and not greeting the coach at the substitution. The captain, who is fundamental for Napoli, must understand that the achievement of the result is more important than unnecessary personalities and therefore must have the coach do his job.

Guido – You’re 100% right. Insigne played a game not at his level regardless of the missed penalty. He deserved to go out earlier yet could not resist making the “capuzziello”. Quite frankly, one thing to avoid. Especially since, as you said, he is very important in the Napoli game. Moreover, given the precedents with Totti and Icardi, it is better not to tease too much Spalletti who certainly does not allow himself to be intimidated. For heaven’s sake, nothing irreparable has happened but when you are Insigne you cannot afford mistakes because everything you do makes the news.

Cesare – You’re right. But we still reiterate that we need to chase our dream of the best Insigne. It is true that we are only at the beginning of the championship and only 7 games have been played but in any case I would say that after today’s victory (it was not easy to win in Florence) Napoli is officially a candidate to fight for the top positions and we are justified in pursuing our dream. Then everyone should take a bath of humility without creating problems.

See also  Indonesians Don't Know! It turns out that this sleeping position can be a trigger for breast cancer, not just food! Be Careful - All Pages