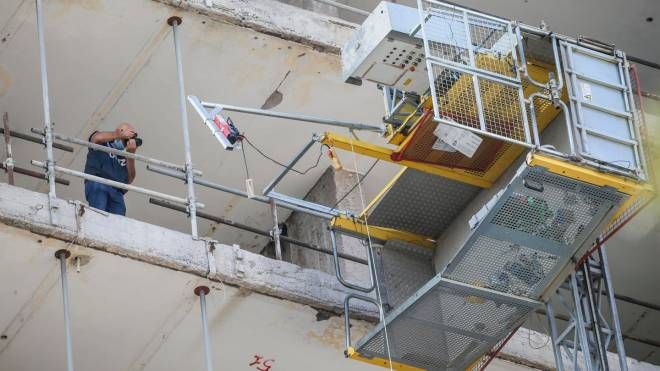 This morning just before 8 on the highway A14 Bologna-Taranto, in the section between Poggio Imperiale and San Severo in the direction of Bari, an accident occurred in which an employee of an external company – at km 528 – was died after being run over from a heavy vehicle during the installation phase of a construction site. Among others, medical aid and traffic police patrols intervened.

a 42-year-old bricklayer, Benito Branca, died while he was renovating a building in Mesagne (Brindisi). According to reports, the man was on the sidewalk when the scaffolding, the balcony and part of the attic collapsed, the rubble of which crushed him. According to an initial reconstruction of the incident, around 12 noon, while maintenance work on the building was in progress, the structure collapsed. In a few moments a pile of rubble was created: those present began to dig with their hands.

Another worker died falling from a scaffolding on a construction site in Rome. It happened in Viale America all’Eur. On the spot, the agents of the Exhibition Commissioner. From a very early police reconstruction, the 47-year-old appears to have fallen from the scaffolding on the eleventh floor. Help was useless.

That of deaths at work “takes on more and more the contours of one massacre that continues every day – stated Prime Minister Mario Draghi at a press conference -, then I will update you on the initiatives we plan to take in this field. “Work safety” measures must be taken immediately, as early as next week “. The Prime Minister announced”more severe and immediate penalties, collaboration within the company to identify weaknesses in terms of work safety at an early stage “.

See also  Not enough vaccines for a smoother date: "Flanders is sla...

The trail of blood does not stop: it was only yesterday you are the victims at work. Two in the Milanese area, one in the Pisan area, one in the Turin area, one in Capaci and another in the Paduan area. In Pieve Emanuele, Milanese hinterland, two workers died in a liquid nitrogen deposit of the university campus of the Humanitas hospital in via Levi Montalcini. In Pisa, a 54-year-old farmer died under the thresher.