Skip to content
Ángela Ferro with Miguel Parra and the collection of axes from Parra. Photos: Oscar Salazar / Facebook.

Ángela del Pilar Ferro Gaitán is miraculously alive after her sentimental partner, identified as Miguel Camilo Parra Niño, He attacked her with seven blows to the skull, at dawn on Saturday October 17.

The events became known after Óscar Salazar, a friend of the victim, published photos on his Facebook account that incriminated Miguel Parra as the alleged aggressor of Ángela Ferro. Infobae knew exclusively details of the night of the tragic event.

“There are seven wounds, of those seven, two are very blunt, one broke his skull, almost hit a vein in the middle of the entire brain. The doctor told Angela that it was a total miracle that she was alive and conscious ”, Oscar Salazar, a whistleblower in the case, told infobae.

Salazar explains that her friend told her that for a few weeks she wanted to leave her home because her partner, Miguel Parra, was taking a violent attitude and had tried to attack her and her son, a minor, who is not the son of Miguel Parra Child.

“-After the incident- she kind of came and went but somehow I got to talk to her. The first thing he said to me when he saw me was: ‘Did you realize that he was going to kill me? I had already told you,’ ”says Salazar. How did it all begin

According to Salazar, he has known his whole life with Ángela Ferro. He tells Infobae that the victim had been dating Miguel Parra for approximately eight months, and six months living with him and his son in a rented apartment north of Bogotá.

Salazar says that a few weeks ago Ángela had gone to stay at his house because she could no longer bear the constant acts of violence that Parra Niño committed against her and her son.

“Angela tells me: ‘fat man, it’s really happening to me that Miguel is no longer respecting my son, I don’t want anything anymore.’ I told him to find an apartment. Angela wanted them to maintain a proper relationship, but the guy did not allow it because of his obsessive jealousy, he constantly told her: ‘you love me or you don’t love me,’ “says the victim’s friend.

Óscar remembers that a few days before the event his friend told him that Miguel Parra arrived at the house where they both lived and verbally assaulted the child and physically attacked Angela because he found them sleeping in his bed.

“(…) The guy arrived at 5:30 am and said: ‘Hey, you already changed me for that child, get him out of my bed, why is he in my position, why is he in my place, why is he here. He began to push her to get her out of bed and then she told him that she was leaving with her son, ”Salazar recalls.

The previous events alerted that something was not going well in that relationship and they should inform the authorities. However, they never believed that the alleged perpetrator attacked the woman he claimed to love in such a way.

Who is Miguel Parra, the alleged perpetrator

Oscar Salazar says that Miguel Camilo Parra Niño introduced himself to Angela as a Christian man, who did not drink, did not smoke and was the manager of a pet supply store. However, According to Salazar, none of that was true. In addition, Salazar says that his friend’s alleged assailant was homophobic, violent and had an absurd obsession with axes and lumbersexual aesthetics. He had six of different sizes kept in his house. “He used those axes for photos, I think he became obsessed with the ‘Vikings’ series, Miguel thought he was a Viking, he’s not the color he appears in the photos, he’s darker, but he bleached them. (…) In the eight months that they have been with them, I stopped talking to him for about four or five months because once I told him: ‘come down, Angela is not making any mistakes because she is with her friends and we are being gay, no problem. ‘ He did not get us off as sissy sissies and told us that one day he was going to do something to us, ”Salazar complains.

In addition, Oscar says that Miguel Parra was forbidden Angela to speak with him and his partner because they were gay. “He was supremely homophobic, he had a terrible fight with us, he is a Christian and belongs to a church called Rebaño de Lobos, that for me is a completely sect.”

The church issue would also have drastically affected Angela and Miguel’s relationship. According to Salazar, the pastors of the church that Miguel Parra attended meddled in their relationship and lived constantly advising them on how to lead a relationship. However, Fow Rebaño de Lobos, through a legal representative, denies that Parra had an active relationship with the church and adds that the man only attended once in 2019.

“I have audios when the pastor’s wife told Ángela: ‘I understand the situation, but you have to give yourself a chance with Miguel. They were brainwashing him and Miguel depends a lot on the people of that church. She told me that she was blown away that they were calling her and they had her until 11 at night talking to her about couples therapy. There was a word that he said a lot and very clear and it was: ‘You have to give me honor because I am your man‘”Says Angela Ferro’s friend.

After the event that Oscar Salazar narrates, in which Miguel Parra jealous of Angela with his own son, the woman made the decision to leave her home and go elsewhere: this was the trigger for the aggression this Saturday morning.

In addition, she says that the week before the event that sent her to the hospital, Angela went to live with Oscar, but decided to go to the house where she lived with her partner to pick up some things. However, during that week he did not return and said to his friend:

“No fat, everything is fine.” I feel that she had already been feeling all this but she kept quiet for fear that we would act against Miguel“recalls Salazar.

At dawn last Saturday, Oscar Salazar received two calls from his friend Angela’s cell phone, when he answered, he received news that fell like a bucket of cold water.

Oscar says that he woke up his partner, they got ready and went quickly to Angela and Miguel’s house. He says that he arrived at 3:45 in the morning and when he was at the scene, he found something that did not seem conventional.

“When I enter Angela’s house, I enter with my partner and at that moment Angela’s father and Angela’s father’s partner are entering, we enter and The first thing we find is Miguel’s mother and sister sitting in a chair in the house with two or three policemen. There I saw the scene, the photos that I uploaded are from when I saw that whole house full of blood, I couldn’t fit in my head”, Tells Infobae the friend of the victim, who today claims justice for Angela. 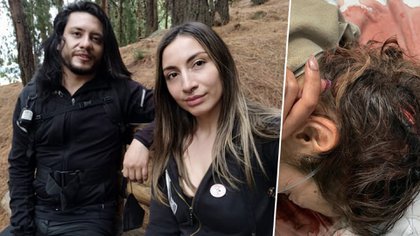 Oscar says that it seemed very strange to him that if not because the child calls him and alerts him to the situation, the mother does not call any authority. Based on these arguments, Óscar says that Miguel Parra’s mother could be covering up for him.

“The boy told us that Miguel told Ángela that it was the worst, that she was a son of a bitch, that how was she going to leave him, that it was because of whore. (…) The last thing he remembers Angela is that she told Miguel that she was leaving the house because the distance was going to allow them to be better and from there she does not remember anything else”Says Oscar.

Angela did not remember anything else because it is presumed that at that time the alleged perpetrator hit her with seven ax blows that almost cost her her life. The stories of the victim’s son, an eyewitness, are key material in the investigation being carried out at this time by the Prosecutor’s Office. 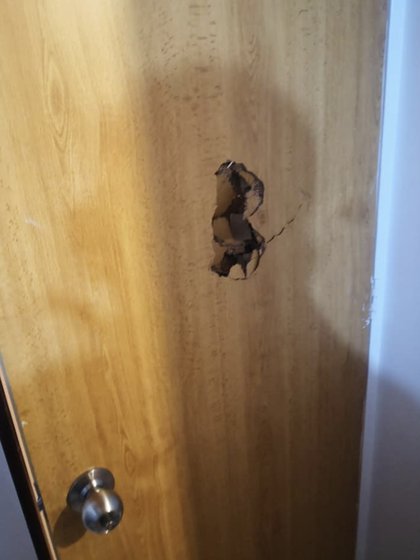 “The guy locks the child in a room and that’s why the photos of the broken doors, because the child tries to break the door to get out. Miguel tells him: ‘get on’, the boy gets on and Miguel leaves him locked up. When the boy tries to leave, Miguel had already committed the aggression of the ax blows, according to what the boy tells me, he threatens him and picks up the ax and says: ‘Get on (sic), and you are not going to say that it was me or you already know what happens to you ”, Oscar recounts who remembers what his friend’s son told him on the day of the events. 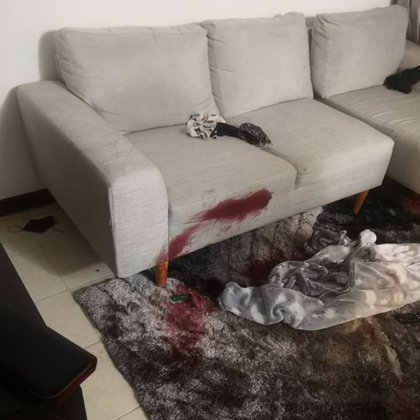 The events of last Saturday morning are now a matter of investigation. It is presumed that the alleged perpetrator was the one who called line 123, other hypotheses say that it was the victim’s son who alerted the authorities of the event. Infobae tried repeatedly to communicate with Miguel Parra but did not answer the contact numbers.

What is clear is that the case of Ángela Ferro is another attempted femicide that so far this year, a crime that has increased dramatically during the pandemic. In Bogotá the situation is alarming, in the quarantine period the only crime that did not decrease was femicide, which had an increase of 8.6 percent compared to 2019. According to the Observatorio de Feminicides Colombia, so far 445 cases have been registered for the year.