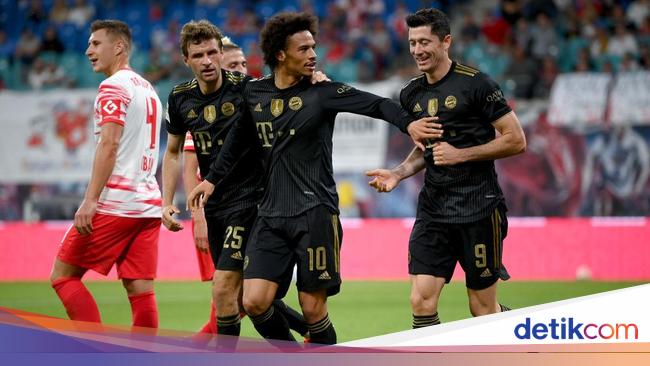 RB Leipzig vs Bayern Munich is presented at the Red Bull Arena in the Bundesliga continued match, Saturday (11/9/2021) night WIB. Julian Nagelsmann, who is now in charge of Bayern, returns to his old team headquarters.

Die Bavaria have been awarded a penalty when the game has been running for 11 minutes. The referee pointed to the spot after reviewing VAR because Kevin Kampl held the ball with his hand.

Robert Lewandowski, who came forward as an executor, did his job well. His shot to the left of the Leipzig goal outwit Peter Gulacsi. Bayern winning 1-0.

Left behind, Leipzig tried to retaliate. They did an experiment in the 23rd minute.

The Leipzig players’ short pass was completed with Kampl’s hard kick from in front of the penalty box. However, the ball can still be secured Neuer.

In the 35th minute, it was Angelino’s turn who failed to convert Leipzig’s chances into goals. Kampl’s cross that didn’t reach the player in front of goal went to Angelino who was standing on the left side of the penalty box. Angelino’s volley unfortunately went wide.

The score 1-0 for Bayern lasted until the first half was complete.

Two minutes after halftime, Bayern could double the advantage. Lewandowski and Davies worked together to break down the left side of the Leipzig defense

Davies pulled a pass at the near post with Jamal Muisiala standing there. Controlling the ball well, Musiala fired into the left corner of the Leipzig goal. Bayern winning 2-0.

In the 51st minute, Leipzig had time to break into Neuer’s goal through Andre Silva. However, this goal was later disallowed by VAR because Silva was offside first.

Three minutes later it was Bayern who were getting away. Piercing from the right side of the penalty box, Musiala released a pass that could be completed by Leroy Sane in front of goal into a goal.

Leipzig was finally able to shake Bayern’s net in the 58th minute. Konrad Leiner scored a spectacular goal from outside the penalty box. His hard kick to the right of the Bayern goal could not be dammed by Neuer.

Bayern then ensured a 4-1 victory in the last minute of the match through Eric Maxim Choupo-Moting. He scored after completing Joshua Kimmich’s breakthrough pass.

The addition of three points makes Bayern now in second place with 10 points. They are two points away from Wolfsburg at the top of the table.