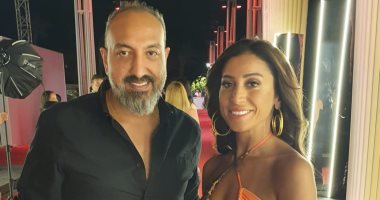 The artist, Dina El-Sherbiny, told “The Seventh Day”, that what some rumors spread about her relationship with her colleague Hassan Abu Al-Roos is incorrect, and there is no love relationship between her and the actor Abu Al-Roos, noting that these rumors are ridiculous, pointing out that Abu Al-Rous is married and has his life and that A personal friend, who explained that he offered her to participate in his new song “Felt Mina” only, and I went through the experience, especially that it is a light and delicious experience during the festival, especially since the atmosphere of the festival is delicious, explaining that she does not know anything about the cancellation of his wife’s follow-up to him on Instagram, And it doesn’t matter to her.

And about her opinion on the fifth session of the El Gouna Festival, she confirmed that she is proud of the holding of the session and its effectiveness despite the fire that caused confusion for the organizers, but what we found made us very happy as artists, and it is certain that the festival became famous in the whole world after the achievements that happened.

It is noteworthy that Dina El-Sherbiny recently finished filming the title holder movie with Hisham Maged and Mohamed Salam, and it is scheduled to be released during the mid-year vacation, and it was written by Ihab Blaybel, and directed by Hisham Fathy.

On the other hand, Dina El-Sherbiny is participating in a Lebanese series entitled “The Visit”, where she began filming her scenes in the past weeks and working with Carol Abboud, Elie Mitri, Abdo Shaheen, Serena Al-Shami and a group of Lebanese actors, and the quality of the work belongs to 8 episodes of horror and suspense, a workshop Narrated under the supervision of writer Mariam Naoum and directed and directed by Adolfo Martinez.