“It’s great that NASA astronauts return to Earth after a very successful two-month mission. Thank you all!”, indicated the president on his Twitter account. And I add: “Astronauts completed the first landing in 45 years. Very exciting!”.

Trump then shared the video of the successful landing.

The pilot Doug Hurley, one of the two astronauts on board, stated: “It is truly our honor and privilege.” As radio communications were cut off, the celebration of NASA employees was heard during the official broadcast.

The two astronauts, who are “fine,” an NAA spokeswoman said during the live broadcast of the end of the Demo-2 mission, They will undergo medical check-ups before traveling by air to Houston, Texas.

This ended the historic Demo-2 mission, which began in late May in Cape Canaveral (Florida) and which will certify the ability of SpaceX, Elon Musk’s company, to carry out commercial space travel.

This Sunday was the first landing in the water of a United States spacecraft since the 1975 Apollo-Soyuz mission. 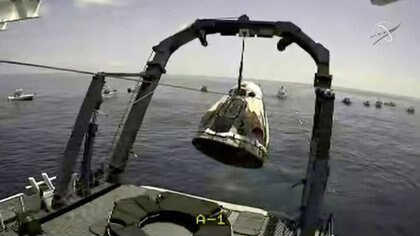 In addition to Hurley, Bob Behnken also traveled on the ship. Both left the International Space Station (ISS) yesterday and traveled 19 hours on their way to Earth.

“Welcome to Earth and thank you for flying with SpaceX,” the flight director announced to the astronauts, who responded immediately. The Crew Dragon Endeavor capsule landed off the coast of Pensacola, Florida (southeast), as scheduled, at 6:48 p.m. GMT, and apparently undamaged after traversing Earth’s atmosphere, live streaming images showed.

A recovery ship rushed to pick up Hurley and Commander Bob Behnken., who spent two months on board the International Space Station.

The success of the mission demonstrated that the United States once again has the ability to send its astronauts into space and bring them back.

Behnken and Hurley have become the first astronauts to be taken to the ISS, located 400 km from Earth, by a private company hired by NASA. In total, they spent 62 days on board the ISS, during which they circled Earth 1,024, spent 114 hours in research, and watched various space vehicles arrive and depart from the space station, NASA reported.

Behnken participated in four spacewalks with another NASA astronaut, Chris Cassidy, who was on the ISS when they arrived.