The president of United States, Donald Trump, asked the international community to hold China responsible for the coronavirus pandemic, denouncing the lack of measures and information on the part of the Asian giant that allowed the spread of the disease throughout the world.

The North American leader said that the world has fought “a great battle against an invisible enemy, the Chinese virus,” and although he was optimistic that the pandemic will be defeated, he pointed against China, the country where Covid-19 originated: “We must hold the country that unleashed this plague on the world, China”. As he reviewed, Xi Jinping’s regime it prohibited internal travel while allowing international flights, and did not offer reliable information.

“The Chinese government and the WHO, which is virtually controlled by China, falsely stated that there was no evidence of human-to-human transmission. then they falsely said that asymptomatic patients did not spread the disease, “he claimed in his message, previously recorded at the White House and broadcast by the UN for the 75th General Assembly.

“We will defeat the pandemic and enter a new unprecedented era of prosperity and peace,” he added, highlighting the deployment of the government. 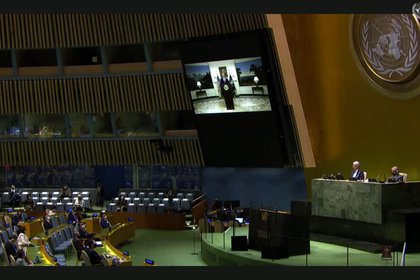 In this image made from UNTV video, United States President Donald Trump speaks in a pre-recorded message which was played during the 75th session of the United Nations General Assembly, Tuesday, Sept. 22, 2020, at U.N. headquarters in New York. The U.N.’s first virtual meeting of world leaders started Tuesday with pre-recorded speeches from some of the planet’s biggest powers, kept at home by the coronavirus pandemic that will likely be a dominant theme at their video gathering this year. (UNTV via AP)

The president, in an address of only six minutes, also took aim at Beijing when talking about the environment. “China dumps millions and millions of plastic and garbage into the oceans, it emits more toxins into the atmosphere than any country, its emissions are twice those of the US and they are growing fast,” she said. In addition, she assured that the US power, after abandoning the Paris Climate Agreement, reduced its emissions more than any country. This despite the fact that his government has relaxed some regulations in the sector.

“Those who criticize the US while ignoring China are not interested in the environment, they just want to punish the US,” he remarked.

Among other issues, he only referred to Latin America when he assured: “We are with the people of Cuba, Nicaragua and Venezuela in their fight for freedom”.

At the international level, he asked to focus efforts “in the real problems of the world: terrorism, oppression of women, forced labor, drug trafficking, human and sexual trafficking, religious persecution, ethnic cleansing of religious minorities ”.

According to him, the position of his policies is to achieve peace through a show of force, but he stressed: “I pray to God that we never have to use it.” In this context, although he made no reference to the November presidential elections, he defended his “America First” policy and urged other countries to do the same, since “only when you take care of your own citizens do you find a basis for cooperation ”.

Returning to his optimistic tone, he closed his message with an encouraging message towards economic recovery: “Next year when we meet in person will be one of the best years in history.”

The UN General Assembly turns 75 and will have the largest number of speeches in its history: all virtual