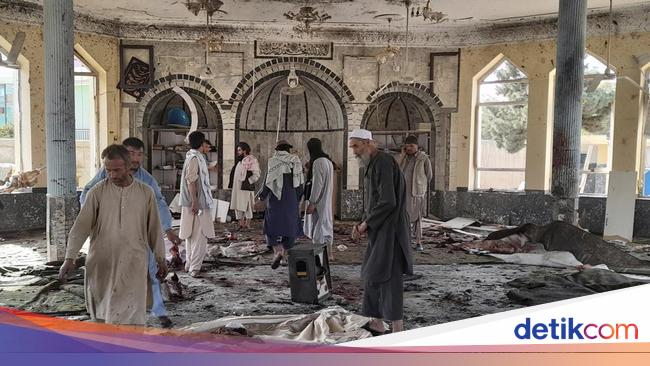 Reported AFP, the explosion occurred on Friday (15/10). The explosion was reported to have occurred while worshipers were performing Friday prayers.

The cause of the explosion is not yet clear. However, it is known that a week ago, a suicide bombing rocked another Shia mosque in the city of Kunduz, which was later claimed by the militant group Islamic State-Khorasan (IS-K or ISIS-K).

An eyewitness told AFP that he heard three explosions, one at the main door of the mosque, the other in the south area of ​​the mosque and another at the ablution place for the congregation.

Another eye witness that three explosions rocked the mosque in the center of Kandahar city during Friday prayers, when the mosque was crowded with worshipers.

Photographs by local journalists posted to social media, as reported by Reuters, show many people who died or were seriously injured with blood pooling on the floor of the mosque.

One of the former members of the local provincial council, Nematullah Wafa, named the mosque that was rocked by the blast as the Imam Bargah Mosque. He also mentioned that seven people were killed and 13 others injured, while warning that the death toll could still rise.

The Islamic State group claimed responsibility for a suicide bombing attack on a Shia mosque in the southern Afghan city of Kandahar.

The bomb attack came just a week after another ISIS-claimed attack on Shia worshipers at a mosque in the northern Afghan city of Kunduz, which killed more than 60 people.

As reported by the news agency AFP, Saturday (16/10), in a statement released on the Telegram channel this Saturday (16/10), the group said two ISIS-Khorasan (ISIS-K) suicide bombers carried out separate attacks on parts of the mosque in Kandahar. – the spiritual heart of the Taliban – when worshipers are performing Friday prayers.

UK-based conflict analysis firm ExTrac said Friday’s bomb attack was the first by ISIS-K in Kandahar, and the fourth mass casualty massacre since the Taliban seized Kabul, the Afghan capital.

ExTrac researcher Abdul Sayed told AFP that the attack “challenged the Taliban’s claim to control in the country. If the Taliban can’t protect Kandahar from ISIS-K attacks, how can they protect the whole country?”

After the explosion, Kandahar police chief Maulvi Mehmood said “a brutal attack has been witnessed on a Shia mosque, as a result of which a large number of our citizens have lost their lives”.

Watch also: Footsteps and testimony of the Lost Boy on Mount Guntur