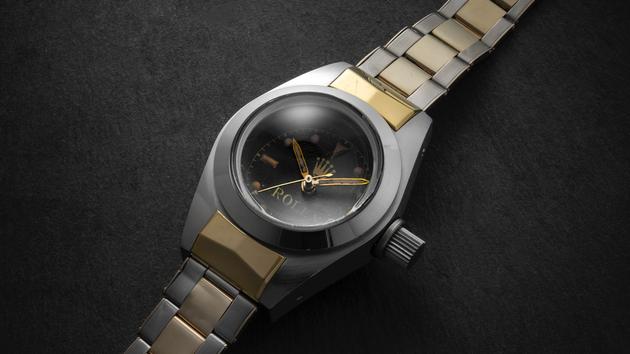 SAGA – Astonishing coincidence: two extremely rare models of the crown brand will soon be auctioned off, at Phillips and Christie’s. But only one of the two has really touched the depths.

To say that the Rolex Deep Sea Special marked the history of the manufacture with the crown, and of watchmaking in general, would be an understatement. Without this watch with its extraordinary resilience, we would probably not be able to wear a Rolex Sea Dweller or a Submariner on our wrist these days. It was on January 23, 1960 that this extreme diving watch won the record for the deepest dive (-10,911 meters) at Challenger Deep in the Mariana Trench, aboard the Bathyscaphe Trieste. With the American sailor and oceanographer Don Walsh and the Swiss physicist, inventor and explorer Jacques Piccard, the Rolex Deep Sea Special was made history.

There would be in total only a little more than thirty copies of this model, disseminated throughout the world. That of the January 23, 1960 dive, the Rolex Deep Sea Special N ° 3, is on display at the Smithsonian Institution in Washington DC. But, surprisingly, two auction houses will each offer one up for auction in the near future. Two identical watches, but in fact very different. Thus, Phillips in association with Bacs & Russo is offering a Deep Sea Special n ° 35 as part of its The Geneva Watch Auction: XIV, which will take place at La Réserve, in Geneva, on November 5 and 7.

But for its part, the house of Christie’s, the new world leader in watch sales, will also offer one during its “Rare Watches” session, on November 8, 2021, in Geneva. It couldn’t be more rare: this is not only a Rolex Experimental Deep Sea Special, but also the very first. This piece is all the more unique and historic as it took part in the first dive of the Bathyscaphe Trieste, with Auguste Piccard on board, on September 30, 1953.

Indeed, this Rolex Deep Sea Special N ° 1 had been developed as a prototype to perfect the concept of the Rolex diving watch. It had therefore been attached to the hull of the bathyscaphe for the first test on the high seas at a depth of 3150 meters in the Mediterranean. Even today, on this historic timepiece, the case, movement and bracelet are in perfect working order. “This watch represents the Grail,” says Rémi Guillemin, head of watches at Christie’s Geneva. That it becomes accessible is a dream come true in many ways for many collectors. It is the embodiment of Oyster case design that has since defined Rolex watches in general and the brand ”.

The Trieste bathyscaphe was launched on August 16, 1953. Among those who attended this launch was a certain Hans Wilsdorf, the founder of Rolex: an obvious source of inspiration for his future diving watches … In total only seven prototypes would have were manufactured by Rolex between 1953 and 1960, and only three have been identified to date: the Deep Sea Special N ° 1 with a “Thinner glass” (in plexiglass) which accompanied the Trieste during its first test in deep water at 3’150 meters (10’245 feet) off the island of Ponza in 1953; the Deep Sea Special N ° 3 with a “Tall glass” (a taller and thicker glass, also in plexiglass, precious lessons from model n ° 1) who made the trip to the bottom of the Mariana Trench (10’916 meters, 35’814 feet) in 1960. Finally ; the Deep Sea Special N ° 5, also a version “Tall glass”, presumably served as a trial for other extreme tests in the period leading up to 1960. It was offered for auction by Christie’s in 2000.

See also  "Marcelo, don't do it": Leeds fans' plea to Bielsa before a vital duel for promotion | Soccer

In 2009, Christie’s also awarded number 31 in the commercial / promotional series of three dozen pieces made in the 1960s, in order to share this technical feat with the general public. It is from this series that the piece soon offered for sale by Phillips seems to belong. Considering its estimate oscillating between 1.1 and 2.2 million euros, it is difficult to imagine how much will be sold for the Deep Sea Special N ° 1 unveiled by Christie’s. But she will undoubtedly win this in-depth duel.