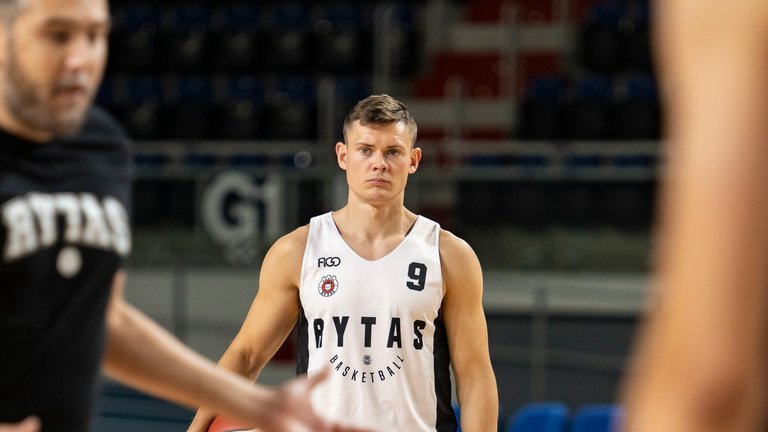 Entering the dressing room of Vilnius “Ryto” for the first time Elvaras Fridrikssons at first glance, he reminded his teammates not of the new attack organizer of the capital’s team, but of a football player.

The 183 cm tall player, who does not shy away from joking, has heard similar comparisons not for the first time, but he aims to prove everything on the pitch.

27-year-old E. Fridriksson recalled his latest impressions after arriving in the capital and the most interesting stages of his career in a one-on-one interview with Paulius Ambrazevičius.

“It probably happened in the middle of summer. I heard from my agent that there was some interest from Ryta, but he said, don’t get your hopes up. I was just patient and waited. Of course, I was very happy when I heard that, because I wanted to come to the big “Ryto” club, which has a good basketball culture. So, I remained patient and in the end they offered me a contract, and I immediately said yes, – E. Fridriksson remembered the first signs of attention from Ryto.

Despite his small stature and calm personality, the offensive player is like a different person on the pitch, fiercely fighting for every inch of the pitch.

“When I’m on the field, I never see anyone bigger or stronger than me. I have the mentality that I try to do my best and try to use my strengths to my advantage. I have a lot of confidence in myself and I feel like I’m going out there to fight and I know that whoever my opponent is, I want to come out the winner of that battle. I try to have such a mindset and leave everything on the pitch as if I have two personalities,” the “Ryto” rookie taught.

Last year, E. Fridriksson, who was chosen as the Icelandic basketball player of the year, was one of the main guides of the Icelandic national team in the selection window for the 2023 FIBA ​​World Championship. In 6 games, the player recorded 22 points, 3.8 rebounds and 2.3 assists.

“I think my parents were proud when I got into the Icelandic men’s national team. I didn’t have a big role in my first few years there, but I stayed patient and worked. A lot of people would have left because it takes a lot of time and the players have to sacrifice whole summers, said E. Fridriksson. – You can’t go on vacation with your family, you can’t go to festivals or do what people do in the summer. So, I stayed patient and I think it’s paying off now because I have an important role in the national team.”

The defender, who returned to Lithuania to compete, also shared his thoughts about the early start of his career in Iceland, different roles, Antanas Sireika’s lessons and the playoff series against Vilnius.

“Long break”: searches for “Ryto”, “Zalgiris” looking at the market, K. Maksvytis’ decisions, “Wolves” salaries and which player would help the national team a lot now