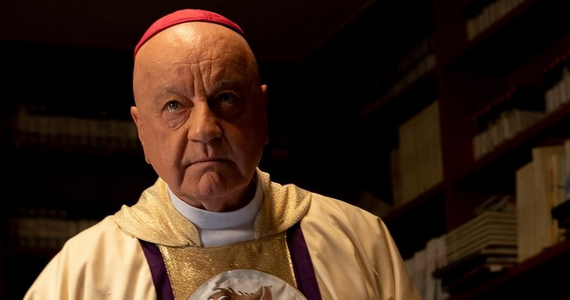 The action of the series “Ekler” takes place in the editorial office of the Catholic television “Wytrwamy”, and the main character and spiritual leader is the figure of Archbishop Ryszard, modeled on Tadeusz Rydzyk, in whom he plays Jerzy Schejbal.

So far, 8 episodes of the “Ekler” series have been produced, each of which lasts nearly 10 minutes. They will be published on the Ekler channel on YouTube.

The story begins with Archbishop Ryszard and Sister Krystyna (Ewa Telega). It will quickly turn out, however, that it takes three to tango. Fortunately, they already have their third one. Father Damian (Rafał Rutkowski) is a real soldier you can count on – they describe the outline of the plot of the premiere episode of the series’ creator.

“‘Ekler’ is a satire of what I don’t like, what is immoral around me. I want us to stop turning a blind eye to the fact that this government treats our country like a cash cow” – the script writer, Ewa Telega, said in the interview with “Newsweek”.

“When the decision was made that the prototype would be Telewizja Trwam, I did a very thorough research. I started to read the statements of Mr. Rydzyk and the statements of our politicians who came to him. It turned out that this is a ready script. It is enough to glue these statements together, recreate how they they tell each other how they behave towards each other. So I took advantage of that a lot when I wrote ‘Ekler’, “added Telega.

The producer of the project is Beata Harasimowicz (“Mały Grand Hotel”). “The ‘Ekler’ series is not about faith or religion, but about distortions in the institution of the Catholic Church in Poland,” she said in an interview with Onet. According to her, Radio Maryja is a “mysterious empire”. “Behind the walls of Toruń’s radio and television, there is a life that affects absolutely the entire society, but nobody knows what it really is” – explained Harasimowicz.

From the photos published on Instagram, we know that he played the character inspired by President Duda Piotr Cyrwus, Beata Kawce was the creation of the equivalent of Beata Kempa. The Minister of Justice, Zbigniew Ziobro (Adam Krawczuk), MEP Beata Szydło (Agnieszka Matysiak) and former Minister of Health Łukasz Szumowski (Bartek Kasprzykowski).

The Minister of Justice is on the side of Ekler! 🙂

Why is the eclair and not the cream cake the symbol of this series? – the creators of the series are wondering. “And what better symbolizes the interior hidden under a layer of piety?” – they reply, adding that the word “éclair” is borrowed from the French word “éclair”, meaning lightning.

Will “Ekler” repeat the success of the satirical series “The President’s Ear” created by the leader of Kabaret Moralnych Niepokoju, Robert Górski, which also made its debut on YouTube before it appeared on the Showmax platform (and on TV4 and Comedy Central)? We will find out about it in a few months.