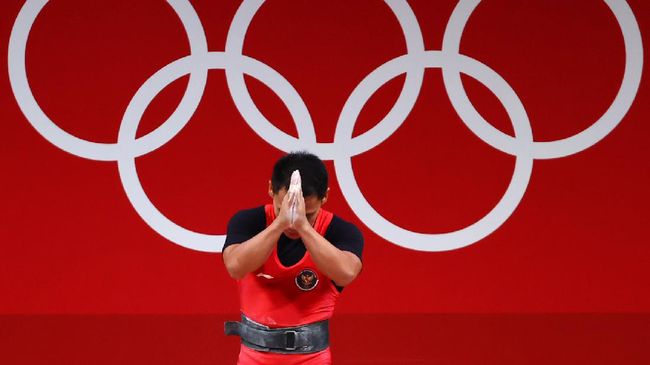 Eko Yuli Irawan must be reconciled to his promise. Intention to make Tokyo 2020 Olympics as the epilogue was postponed. The lifter from Lampung is still eager to appear at the 2024 Paris Olympics.

Throughout the competition, Eko Yuli competed with Li Fabin. Fabin, who made his first lift in the snatch, failed to lift the 137kg weight. Meanwhile, Eko Yuli succeeded in lifting the same weight, which was 137kg.

On the second occasion, Li Fabin managed to match Eko Yuli’s 137kg force. However, Eko Yuli who intended to shoot past 141kg failed to do this lift.

Meanwhile, Li Fabin successfully lifted 141kg on the third opportunity. Eko Yuli still had a chance to equalize the record, but he again failed to make the third batch.

The competition still continues in clean & jerk. Li Fabin successfully did a 166kg lift on the first occasion. Meanwhile, Eko Yuli did not want to be in a hurry and managed to lift 165kg, only 1kg from the weight chosen by Fabin Li.

Li Fabin then managed to sharpen his record after successfully lifting 172kg on the second opportunity. Meanwhile, Eko Yuli tried to catch up by increasing the load 12kg heavier than before, which was 177kg. Unfortunately the attempt failed.

On the third occasion, Eko Yuli tried his best to complete the 177kg lift but failed again. Fabin Li who had the upper hand tried to lift 178kg, but this time his attempt failed.

After the competition, Eko humbly apologized for not being able to achieve his personal target at the 2020 Tokyo Olympics.

“Hello Indonesian people, thank you for your support and prayers so far. Sorry for failing to win a gold medal, maybe this is the best fortune for me,” said Eko Yuli via a short video on his personal Instagram.

Eko has no intention of retiring and still has ambitions to win the highest medal in the next edition. However, he did not want to be grandiose about the target.

“We will see to the future. If we are given the opportunity and we can compete, why not?” he said when met by Indonesian journalists covering the 2020 Tokyo Olympics in the mixed zone weightlifting arena, Tokyo International Forum, Sunday (25/7).


Eko Yuli Save Asa at the 2024 Paris Olympics