PEACE.- Bolivia began a slow vote count to meet the winner of Sunday’s presidential elections, after a quiet election day with high participation that contrasted with the tension that preceded the crucial election day.

In a message to the country after the closing of the voting centers, the interim president Jeanine Áñez thanked the Bolivians “for the quiet day” and asked “patience to wait for the results without generating violence.”

He also urged that the law be complied with, because “these are times that require maturity on the part of all of us,” finally stressing that, over any difference, “we must build a united, democratic and peaceful Bolivia.”

The president together with a group of her ministers evaluates the electoral day at the presidential residence from the area of ​​San Jorge in La Paz, where he arrived after noon and after casting his vote in Beni.

The decision of the main electoral body of the country hours before the vote to discard the rapid system of dissemination of the results, generated doubts mainly in the party of former president Evo Morales, who made a call from Argentina that the result of the elections “be respected by all.”

Official calculations could take up to five days, indicated the president of the Supreme Electoral Tribunal, Salvador Romero.

Bolivians arrived at the elections amid a polarized climate after the annulment of last year’s elections due to allegations of fraud, which caused a social outbreak with 36 deaths and forced the resignation of Morales after 14 years in power.

However, authorities and observers highlighted the civility of citizens who turned to the polls en masse despite the new coronavirus pandemic as they had to stand in long lines with little distance. 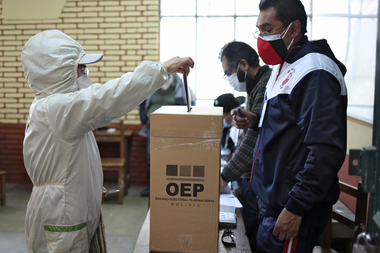 A woman with protective equipment as a preventive measure against the spread of the new coronavirus, casts her vote at an electoral college in La Paz on October 18, 2020 during the Bolivian general elections Source: AFP

“People turned to the polls because they want to decongest this political crisis at once ”said Franklin Pareja, professor of political science at the Universidad Mayor de San Andrés de La Paz (public).

Bolivians hope that the complex elections can re-guide the country’s democratic future after a year of political confrontation aggravated by the economic stagnation brought on by the pandemic.

Due to the fact that electoral day was extended due to the pandemic, lines were still observed at the voting tables after 5 p.m., when the voting period closed.

“The people have an admirable civic spirit and that is valuable in a country that has had to repeat its electoral process,” said Francisco Guerrero, from the observer mission of the Organization of American States (OAS).