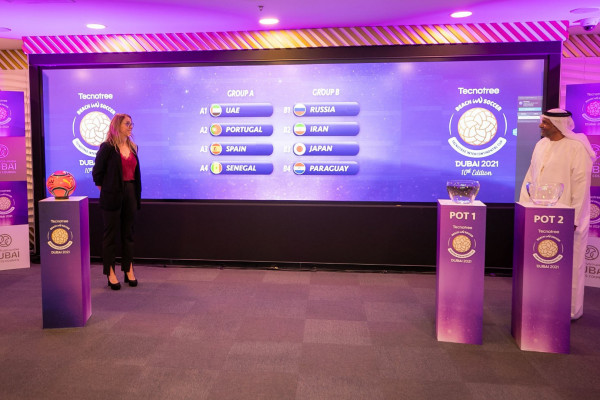 DUBAI, 12th October / WAM / Under the patronage of His Highness Sheikh Mansour bin Mohammed bin Rashid Al Maktoum, Chairman of the Dubai Sports Council, the Dubai Sports Council is organizing the tenth edition of the Confederations Cup for Beach Soccer in cooperation with the Beach Soccer Committee of the International Football Association, and its competitions are held on Kite Beach, Umm Suqeim, from 2 to 6 November.

The tournament draw ceremony was held at the headquarters of the Dubai Sports Council in the Dubai Design District, in the presence of His Excellency Saeed Hareb, Secretary General of the Dubai Sports Council, Joan Cosco, Chairman of the FIFA Beach Soccer Executive Committee, Ali Hamad, member of the UAE Football Association and Chairman of the Beach Soccer Committee of the Federation, and Brysh Ranjan, Chief Financial Officer of Technotry is the main sponsor of the tournament.

The ceremony was attended by Ali Omar, Chairman of the Organizing Committee of the Championship and Director of the Sports Development Department of the Council, Ahmed Salem Al-Mahri, Director of the Championship, UAE international referee Ibrahim Al-Mansoori, winner of the “Mohammed bin Rashid Al Maktoum Award for Sports Creativity”, the coach of the national beach soccer team and a number of the team’s stars. The draw ceremony was conducted by former Emirati referee Mohammed Saeed and Laura Coxo, Marketing Director of the Beach Soccer Executive Committee.

The organizing committee announced that the championship matches will be held in the league system in one round, with the first and second place winners from each group qualifying to the semi-final stage, which is played by the knockout system, so that the winners qualify for the final match, and the losers compete for bronze medals in the match to determine the third and fourth places.

At the beginning of the press conference, His Excellency Saeed Hareb, Secretary-General of the Dubai Sports Council, welcomed the attendance of the delegation of the Beach Soccer Committee of the International Football Association, the Emirates Football Association, the media, and Techno Tree Company, the main sponsor of the tournament, and thanked them for their constant keenness to make the event a success. He said: “We are pleased to organize the event. The tenth edition of the FIFA Beach Soccer Confederations Cup, which was born in Dubai and has become the second most important tournament after the FIFA Beach Soccer World Cup, and its arrival to the tenth edition indicates its great success and international standing. The world gathers under the slogan “Connecting Minds, Creating the Future”, and we will continue to organize the tournament in the coming years as it has become an essential part of the annual calendar of events in Dubai.”

For his part, Joan Cusco thanked the Dubai Sports Council and the work teams for the continuous support of the tournament and expressed his happiness for the continuation of the successful partnership that brings together FIFA and the Dubai Sports Council for 10 years, praising the role of sponsors and supporters of the tournament in addition to the Emirates Football Association, which provides the necessary technical support to develop Beach soccer in the country.

In turn, Ali Hamad said: “We thank the Dubai Sports Council for its pioneering role in supporting the tournament and beach soccer, and affirmed their confidence that the team will perform excellent in the tournament and be able to surprise this year, and the Football Association continues its efforts to organize the beach soccer league with the participation of 12 teams and a number of other tournaments to develop and develop this important sport and increase its popularity and spread among all segments of society.”

Presh Ranjan, Chief Financial Officer of Technotry, expressed his happiness to cooperate with the Dubai Sports Council to sponsor this tournament and stressed the keenness of his company, which is specialized in the field of modern technologies, to build a continuous relationship with the Dubai Sports Council and to be present in the major and important events organized by the Council, as they believe in the great role of sport in societies and the prestigious level. For the various sporting events organized by the Council.