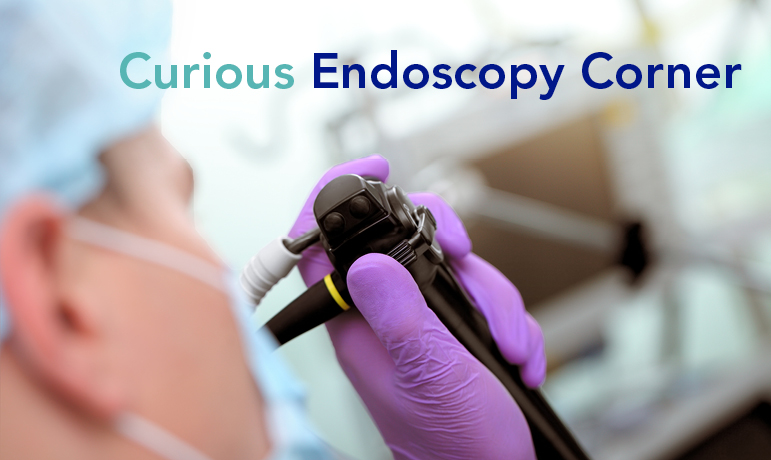 A 65-year-old man was referred for suspected early cancer of the rectum. During diagnostic endoscopy, at 2 cm from the linea dentata, a flat elevated deviation of approximately 25 mm was seen with a central depression (photo 1). Closer inspection of pit and vascular pattern with narrow band imaging (NBI) showed clear evidence of deeper submucosal invasion with an amorphous Kudo Vn pit pattern and a highly irregular (Hiroshima C3) vascular pattern (photo 2). No biopsies were taken. The MRI rectum showed a T1/2 tumor in the lower rectum with no suspected locoregional lymph nodes.

Given the optical suspicion of deeper submucosal invasion, an endoscopic submucosal dissection (ESD) was not considered suitable due to the high probability of an irradical margin in the deep resection plane. Therefore, an endoscopic intermuscular dissection (EID) was proposed.1 This new endoscopic resection technique is a derivative of the ESD, in which the dissection is not performed in the submucosa (as with ESD), but in the plane between the inner circular and outer longitudinal muscle layer (the intermuscular space) (photo 3 and 4). By including the inner circular muscle layer in the resection specimen, a radically deep resection margin can be achieved for tumors that grow deep into the submucosa. The outer longitudinal muscle layer and thus the rectal wall remain intact (photo 5). Due to the highly developed muscle layer of the rectum, this technique is only suitable for rectal lesions.

The procedure was technically successful and without complications with an endoscopic radical resection of the tumor (photo 6). The patient was discharged home the same day. Histopathological examination showed a well to moderately differentiated adenocarcinoma extending deep into the submucosa (sm3), with all cut surfaces clear (photo 7). There was no evidence of lymphovascular invasion or high-grade tumor budding. The treatment can therefore be regarded as a curative resection.

The patient has now been in follow-up for one year, during which MRI, CEA and endoscopy show no indications of recurrence (photo 8).

Deep submucosal rectal tumors have long been a ‘no-go’ for curative endoscopic treatment. In addition, endoscopic submucosal dissection of deep submucosal invasive lesions was often technically impossible due to the lack of a margin between tumor and muscle layer. The intermuscular dissection described here is a beautifully elegant extension of the ESD technique. This makes radical endoscopic resection also feasible for deep submucosal and early T2 tumors.

More than 140 patients have now been treated with this technique in UMC Utrecht and Amsterdam UMC, which has led to rectum-sparing treatment in 70% of the cases. A recent meta-analysis (Zwager et al, Gastroenterology 2022) shows that depth invasion is not an independent risk factor for local lymph node metastasis: the nature of the tumor (lymphangio invasion, budding and differentiation grade) seems many times more important than depth invasion. Without such risk factors, the risk of local lymph node metastasis appears to be < 3%. So this intermuscular dissection is here to stay!