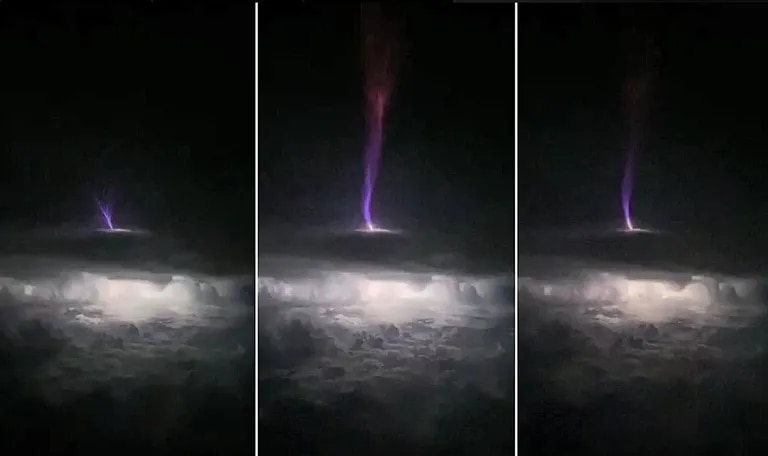 A group of scientists recorded in May 2018 a gigantic “inverted lightning” that appeared over a thunderstorm in Oklahoma. Already at this time they realized that It was not just any phenomenon.. Four years after the event, American experts have not been able to unveil the mystery.

The powerful electrical discharge carried 100 times more charge than an average storm bolt. It moved about 300 coulombs (unit of electrical charge) into the ionosphere, the lower edge of space, while typical lightning carries less than five coulombs between the cloud and the ground.

Four years after the episode, a team of researchers created a three-dimensional lightning map of Oklahoma and published their findings in the journal Science Advances. The study allowed to know some unpublished details about the strange phenomenon and to better understand how and why it occurred. “We were able to map this gigantic “jet” in three dimensions with very high quality data”celebrated Levi Boggs, a scientist at the Georgia Tech Research Institute and lead author of the paper.

“We could see very high frequency sources (VHF) above the cloud top that have not been seen before with this level of detail. Using satellite and radar data, we found out where the tip of the discharge was located”, he added.

In that line, they revealed that the VHF sources were produced by small structures at the tip of the beam called streamers -200 C° plasma strips- and that the discharge activity of the coils it can reach all the way from the top of the cloud to the ionosphere.

They also determined that the strongest electrical currents came from “leaders”, much hotter sections that can reach temperatures of over 4,400°C.

Now why do giant jets launch cargo into space? Those who worked on the research speculate that something could be blocking the flow of charge down or to other clouds. Records of the Oklahoma event show little lightning activity from the storm in the moments before the big lightning strike.

Despite what was discovered there are still many unanswered questions about the giant “jets”which are part of a class of mysterious transient luminous events. It is estimated that this type of phenomenon occurs between 1,000 and 50,000 times per year and is more frequent in tropical regions.

Beyond its novelty, “the giant ‘jets’ could have an impact on the operation of satellites in low Earth orbit,” warned the leader of the study. Therefore, as more space vehicles are launched, signal degradation and performance issues could become more significant. They could also affect technologies such as over-the-horizon radars that bounce radio waves off the ionosphere.

With information from Europe Press