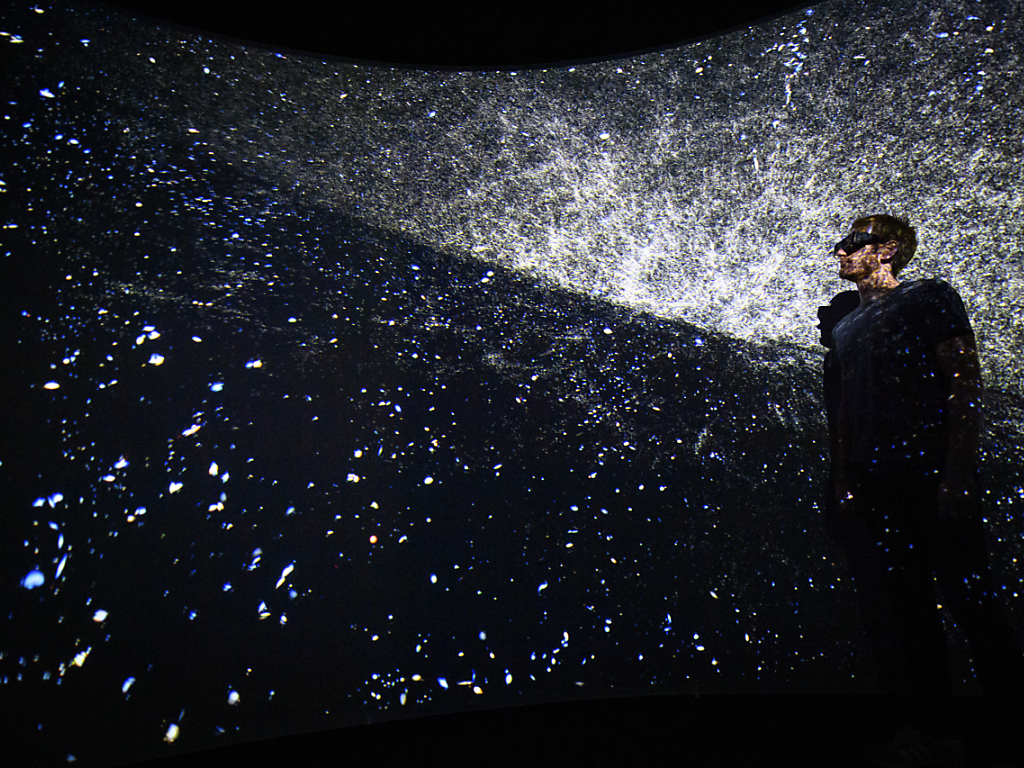 Traveling to the edge of space comfortably seated in your chair is now possible thanks to software developed by astrophysicists and computer scientists from EPFL. Called VIRUP, for “VIRtual Universe Project”, it is available in open source.

This powerful software builds in real time a virtual universe based on the most detailed contemporary cosmological and astrophysical data, the Swiss Federal Institute of Technology Lausanne (EPFL) said in a press release on Tuesday.

Astronomers and astrophysicists have been collecting data for decades on billions of celestial objects, in the night sky, with telescopes on Earth and in space.

Generating a representation in real time, as if one were as an observer at any point in space and time, this is what Yves Revaz, astrophysicist at the Astrophysics Laboratory, undertook to do. (LASTRO) of EPFL, assisted by computer engineer Florian Cabot.

For VIRUP, it was a question of generating 90 images per second, with terabytes of data. This constraint meets the requirements of the virtual reality environment, to provide a fluid and immersive experience.

“Viewing astrophysical data is much more accessible than graphs and numbers. It helps to develop our intuition of these complex phenomena ”, explains Yves Revaz, quoted in the press release.

“VIRUP can make all of these astrophysical data accessible to everyone. This will become more and more important, as we build even larger telescopes, like the Square Kilometer Array, which will generate enormous amounts of data, ”adds the researcher.

See also  Neuchatel - The image hunter did not defame the hunters

The Planck Mission deploys a satellite that measures the first lights after the Big Bang, referred to as the cosmic diffuse background, and the Open Exoplanet Catalog aggregates various data sources on exoplanets. Other banks include a directory of about 3000 Earth orbiting satellites, as well as textures to represent the objects.

VIRUP also generates contemporary data repositories and robust scientific simulations. We can contemplate the future collision of our Milky Way with Andromeda, the neighboring galaxy. You can also see huge portions of the cosmic web – the large-scale filamentary structures that stretch across the Universe – and their formation over billions of years.

One of the main challenges is to ensure a smooth transition between the various databases, notes EPFL. “We were thinking of using graphics engines to visualize the data, but in the end I had to develop one especially for this project,” says Florian Cabot.

This first version of VIRUP already allows visitors to visit the 4,500 exoplanets discovered to date, even if their appearance is the result of an artistic interpretation, derived from observations. The next steps include the inclusion of banks of objects belonging to the solar system, such as asteroids, as well as various galactic objects such as nebulae and pulsars.

A flexible and immersive environment

For a fully immersive experience, in 3D and 360 degrees, you need a virtual reality headset and a computer to start the VIRUP engine, as well as storage space.

VIRUP can also generate virtual universes in environments other than the virtual reality headset, planetarium domes, for example. A transition made possible thanks to a collaboration between LASTRO and the Laboratory of Experimental Museology of EPFL (eM +).

To experience VIRUP in a dome, you will have to wait until the next EPFL exhibition, “Cosmos Archeology: Explorations in Space and Time”, which will open on April 21, 2022 at the School’s pavilions. . The show was presented in September at the Synra Dome of the Tokyo Science Museum and will be held at the Dubai World Expo from October 17 to 30 as part of the EPFL Virtual Space Tour.