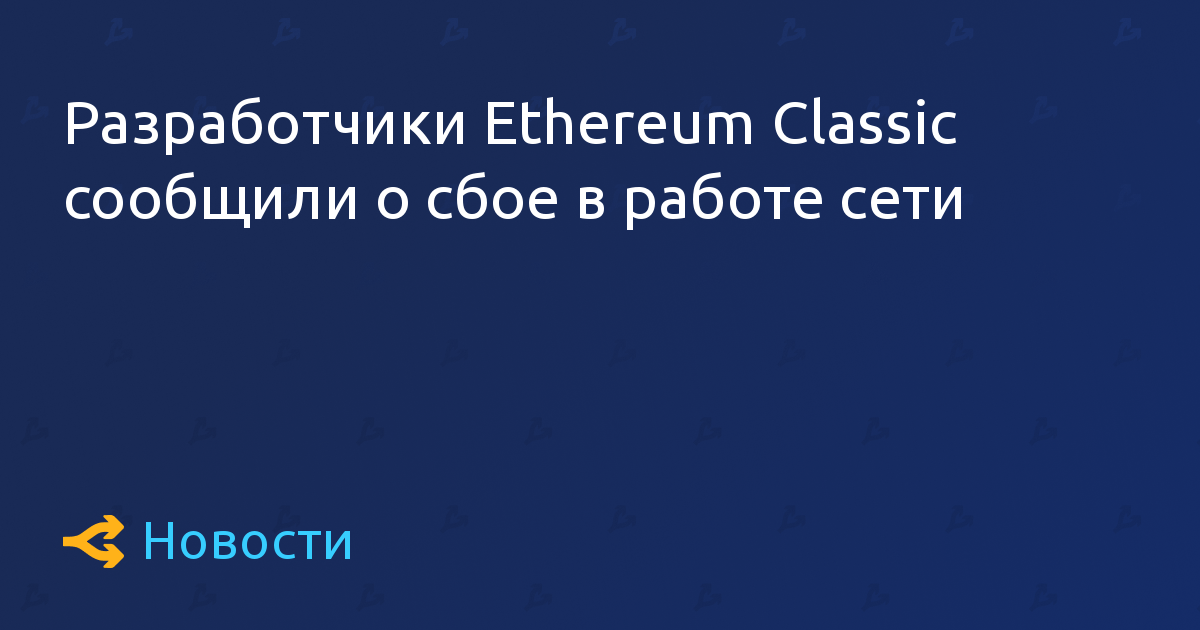 The Ethereum Classic network experienced a glitch, the exact nature of which has not yet been established. The developers confirmed that they are studying the causes of the incident, recommending that exchanges, mining pools and other users temporarily refrain from carrying out transactions.

PSA: During this ongoing network maintenance we kindly ask service providers i.e. exchanges, mining pools, and others to temporarily halt $ETC deposits as we further investigate the issues behind the current state of the network.

We will be post all new updates here.Thanks! pic.twitter.com/hyc1HEpxNQ

Earlier, the lead developer of the Ethereum Foundation, Hudson Jameson, wrote about the “problem in the ETC blockchain”.

There is a problem on the Ethereum Classic (ETC) blockchain. Exchanges need to pause deposits and withdrawals.

At the same time, he found it difficult to answer exactly what the problem was, specifying that he was receiving information from miners who were in the wrong chain.

Bitfly representatives, meanwhile, report that at block 10904146, the Ethereum Classic blockchain has undergone a reorganization 3693 blocks deep. They speculated that a 51% attack might be the cause.

Today the #ETC chain experienced a chain reorg of 3693 blocks at block 10904146. This caused all state pruned nodes to stop syncing. It is likely caused by a 51% attack and all exchanges are advised to halt deposits & withdrawals immediately and investigate all recent tx. pic.twitter.com/lUNtifaBWT

ETC Core lead developer James Wu has not yet confirmed this information, urging “not to worry.” According to him, the developers are working on a solution to the problem, and it will be fixed.

Hi everybody, @etc_core is working on it now, please kindly wait for the response from the core team. No worries, it will be solved. Exchanges need to pause deposits and withdrawals now. https://t.co/5CrrLNDHax

In July, the decision to abandon further support for the ETC client and focus on other projects was made by the OpenEthereum team, which accounted for about 50% of all nodes in the Ethereum Classic network. During voting on GitHub among other things, concerns have been raised about the immutability of the ETC blockchain. Previously similar solution accepted Multi-Geth developers.

Update: ETC developers confirmed dividing the network into two circuits at block 10904146, which resulted in its unstable state. The intruder miner mined about 3000 blocks, but the developers do not see clear signs of a targeted attack. While admitting this in part, they emphasize that the 51% attack, if any, did not lead to any undesirable consequences. Miners are encouraged to continue working as before, following the longest chain. The state of the network, according to the developers, is normalizing, but the investigation of the incident continues.

ForkLog continues to monitor developments. Subscribe to our news on Telegram: ForkLog FEED – the entire news feed, ForkLog – the most important news and polls.

Found a mistake in the text? Select it and press CTRL + ENTER