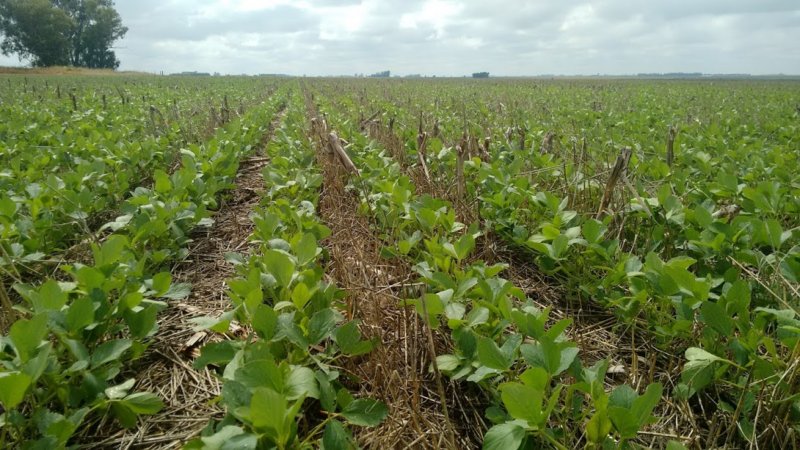 Argentine agricultural production of the main crops (corn, soybeans, wheat and sunflower) increased significantly in the last 20 years, doubling to reach 135 million tons today. This phenomenon is explained both by the expansion in the area under agriculture, which grew by 50%, as well as by the increase in the yields per unit area of ​​crops (MAGYP, 2020). Although the consumption of fertilizers grew greatly in recent years (Fertilize 2020), nutrient balances continue to be negative, which decreases their reserves in the soil, affecting the sustainability of production systems (Cruzate and Casas, 2012; García and González Sanjuan, 2013). This is evidenced in the values ​​less than 1 of the quotient between the application of each nutrient with the fertilizer and the removal by the main crops (Garcia and Diaz Zorita 2014).

The negative balances of nutrients for Argentine soils led to a degradation in natural fertility, which was manifested with the decrease in the levels of organic matter, phosphorus, exchangeable bases and micronutrients, significantly reducing the productivity of the crops observed in the different zones. and production systems (Sainz Rozas et al., 2013).

Thinking about sustainable agriculture implies development of balanced fertilization strategies considering the critical levels of the different nutrients. In lots with high availability, these balances may be temporarily negative, but with continuous monitoring to avoid falling below critical levels, while in situations of low availability, a greater contribution of nutrients through fertilizers will be necessary to achieve balances. positive, aiming to overcome nutritional limitations in the generation of yield by crops (Ciampitti and Garcia 2008). This is why it is vitally important to develop balanced fertilization strategies that consider both the availability of nutrients in the soil and their extraction by crops.

The experiment was carried out near the town of Río Cuarto (Córdoba), it was implemented during the 2016/17 campaign with corn, it was continued during the 2017/18 and 2018/19 campaign with soybeans and in 2019 / 20 with corn. 6 fertilization strategies were evaluated: Control -T1- (without nutrient application), Producer -T2- (P and N are applied according to the zonal mean), Normal -T3- (incorporates N, P and S according to sufficiency criteria), Improved -T4- ( incorporates N, P and S for medium performance demands), Full -T5- (incorporates N, P, S and Zn for high performance demands), and Enhanced Producer -T6- (P, N and S are applied according to the average zonal), these strips crossed the different environments within a production batch. Being the experimental design in strips, where each plot is 16 m wide and 400 m long.

At the time of sowing, soil samples from 0 to 20 cm and from 20 to 40 were taken and the content of organic matter, P-Bray, N-NO3, S-SO4, Zn, Bo and pH was determined. The harvest was always carried out with a machine equipped with a GPS yield monitor and the data obtained was processed by Q-Gis and analyzed by general mixed models using the INFOSTAT software. The yield data were normalized by the average yield of each year in order to combine the yield of corn and soybeans. In addition, grain samples were taken from each treatment to evaluate the content of N, P and Zn in grain. Finally, for the last campaign, a mass balance of the different soil nutrients was carried out in each of the environments.

The results found indicate that the treatment that provides the highest quantity and content of nutrients, that is, Complete treatment, presented the highest relative performance (1,143) and was statistically superior to the rest of the treatments. Second, the Normal and Enhanced treatment, whose relative yields were 1,043 and 1,013, that is, they were treatments whose yield slightly exceeded the average yield. With relative returns close to the average (0.973 and 0.957), the Enhanced Producer and Producer. Finally, with a yield 13.5% lower than the average, the control treatment was located (Figure 1).

Complete fertilization generated an increase of 18.6% in relation to Producer management as an average value of the two crops in the four seasons and 27.8% above the control.

The nutrient content in soybean grain (Table 1) and corn (Table 2) indicates that in both cultures the concentration of N, P and S was barely modified by the treatment, however a difference was found in terms of the Zn content between the treatments. Those treatments that generated the highest yields and in which Zn was not added in fertilization, a decrease in the concentration of Zn was detected, which is explained by a dilution effect of this micronutrient, a situation that is reversed when in the scheme of fertilization incorporates this micronutrient.

Table 1. Concentration of nutrient in grain for soybean cultivation.

After four years it was detected that the control treatment had a negative balance for all the nutrients, which was to be expected since in this treatment nutrient extraction is carried out and there are no external contributions of the same. The same occurs with the producer treatment, which only contributes P and N (the latter only in corn) in small quantities. The normal treatment, which provides S in soybeans and NP and S in corn, only generated a positive balance in S, while the improved treatment provided by NP and S in all crops (and in corn twice as much as the normal treatment), was positive for P and S. Finally, the full treatment With contributions of N, P, S and Zn, it presented a positive balance for all nutrients except for N, given that during soybean cultivation, N is not added to the soil through fertilizers.

Table 3. Nutritional balance for each treatment after the four years of study.

Based on the results obtained in the four evaluation campaigns it can be concluded that the difference in production between treatments is increasing and that maintaining high fertilization doses with the addition of N, P, S and Zn in corn and P, S and Zn in soybean it allows to increase the yield and improve the nutritional balance of the soil. On the other hand, a dilution effect of Zn in grains is observed when it is not added to the fertilization scheme. Finally, it is important to note that it would be of great interest to keep this study for several more years to evaluate its impact over time.