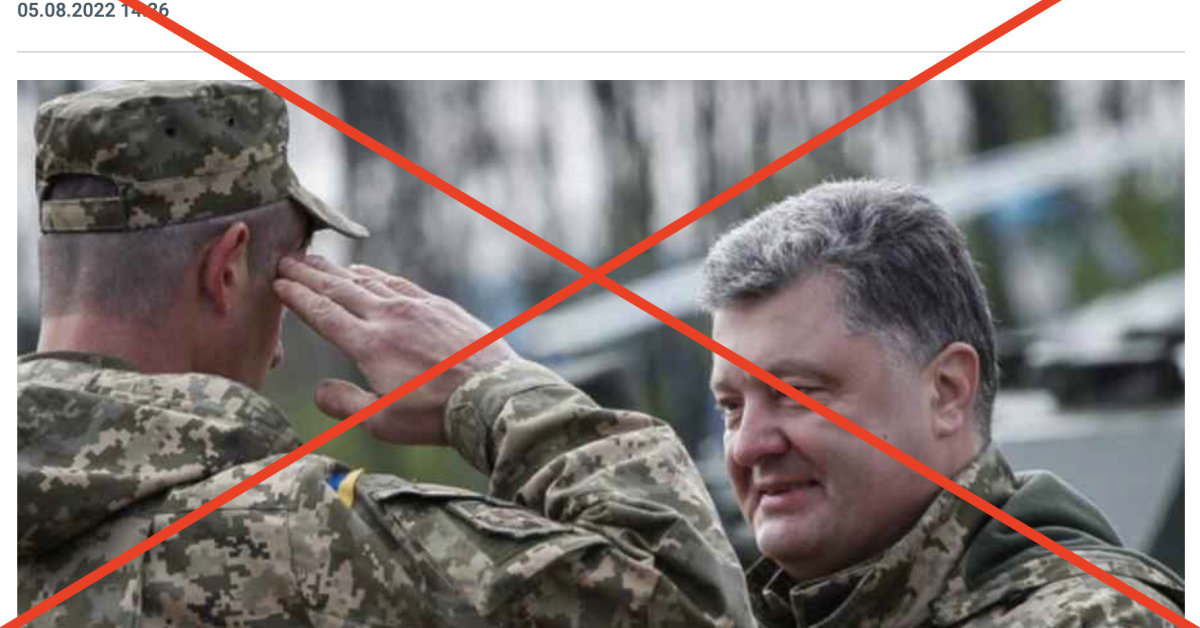 Scary posts and messages poured in over a month ago. “P.Poroshenko is preparing a military coup in Ukraine,” announced the titles of posts on several Telegram channels.

True, in the very short and almost identical texts on Telegram channels (here, here) more about the threatening future of Ukraine – not a word. All of them claim to be based on and link to the well-known French daily Le Monde article.

“Le Monde” reports on armed formations of the Ukrainian armed forces, personally loyal to P. Poroshenko, which he believes could support the fifth president in a possible attempt to carry out a military coup. in this article not only the title hints at a coup.

The records quote that “one of the former president’s strongholds is the 206th Territorial Defense Battalion operating in Mykolaiv.” Journalists presented it simply as “Poroshenko’s battalion” and “a political army for the future of Ukraine.”

The guests were guided around the battalion’s positions by the former Minister of Internal Affairs of Ukraine, Prosecutor General Yuri Lutsenko. He calls the trenches and ditches “Petro Poroshenko Alley”.

The ex-president himself inspected these positions two weeks earlier. Journalists are said to talk about P. Poroshenko with sympathy, calling him a hero who created the “future army of Ukraine”, but who is still experiencing political persecution.

It is true that not a single post or article mentions how Mr. Poroshenko is planning a coup, how he is preparing for it. Perversion (in English it is called a term borrowed from French Rebellionwhich means “blow to the state”) is a seizure of power and the overthrow of a government by a political or rebel group, the military, or a dictator.

See also  China Reveals Reasons for Deteriorating Relations with US

Since the coup is sudden, illegal, and often accompanied by violence, it is unlikely that the perpetrators would talk about it publicly, let alone share the details of the plan. Therefore, it is doubtful that the former leader of Ukraine revealed such intentions to journalists.

Among the soldiers – a group of politicians

This is confirmed by a more detailed analysis of the Le Monde article. It does not claim that P. Poroshenko may be using his military activities to campaign in the upcoming elections as a plan for a military coup. The essay does not mention such plans, does not make assumptions that the former president is preparing a military coup in Ukraine.

The text, titled “War in Ukraine: ‘Poroshenko’s battalion’ – a political weapon for the future of the country”, says that the predecessor and rival of the current president Volodymyr Zelensky stands at the origins of the military group where the politicians are fighting.

Screenshot from lemonde.fr/French journalists did not write that Petro Poroshenko was planning a military coup

Journalists visited a village in the south of the Mykolaiv region, near which the front line stretched. Really them accompanied J. Lucenka testified: “After 25 years spent in politics, I couldn’t not be here.”

He was the Minister of Internal Affairs under President Viktor Yushchenko, the leader of the Maidan Revolution, the leader of P. Poroshenko’s party and its parliamentary group, and the Prosecutor General. When the war started, the man joined the southern front.

However, the article does not tell about J. Lutsenko, but about the political struggles of the former and current presidents of Ukraine and the experience that the former head of the country and his comrades gain on the battlefield.

The Russian media call the 206th Territorial Defense Battalion “Poroshenko’s Battalion” and point out that it is directly under the ex-president. The battalion actually has up to 20 political figures supporting it, such as the aforementioned J. Lutsenko, former Secretary of Security and Defense Oleksandrs Turchynov.

See also  Coronavirus, Sense of Smell | Danish research: Korona can cause long-term problems with the sense of smell

According to J. Lutsenko, the name “Poroshenko’s battalion” is not completely correct, because the war is being fought “for values ​​and principles”. One of the battalion commanders, Pavlo Tuka, even noted that he is directly under the command of the Commander-in-Chief of the Armed Forces of Ukraine Valery Zaluzhny.

The battalion consists of only 800 people – so much, according to the propagandists, that it would be enough to seize power in the whole of Ukraine.

French journalists hinted that P. Poroshenko could use the experience she gained during her service in the territorial defense in future political races. However, the article never states that he intends to use the military to overthrow the current government. This is a narrative created by Russian propaganda to undermine confidence in the Ukrainian armed forces.

Rumors are fueled by an ex-parliamentarian

This is not the first time that Russian propaganda has hinted at a possible military coup in Ukraine. One of the disseminators of such information is former Verkhovna Rada member Ilya Kyva.

On February 24, as soon as Russia attacked Ukraine, a politician expressed approval to the actions of the aggressor, because Ukrainians are supposedly one nation with Russians and Belarusians, so they need to be freed. I.Kyva accused the president and called on him to resign.

A week later, the “For Life” Opposition Platform removed politician from his faction in the parliament and the party, and the Prosecutor General Iryna Venediktova reported that he accused of treason. Verkhovna Rada took away from I.Kyva and the parliamentary mandate.

See also  A young man has fallen from a high floor of a building, in the surgeries they are fighting for his life

Finally he asked granted Russian citizenship and political asylum by Russian President Vladimir Putin, and is now issuing various statements in support of the Russian invasion.

That Mr. Poroshenko can carry out a coup after 10 days, he announced already in 2020 in August. Again in February this year predicted coup if UK Prime Minister Boris Johnson resigns. As it is known, the latter has not held these positions since the beginning of September, but left by his own decision.

Also read: Ukraine is not led by soldiers instead of Volodymyr Zelensky: he is in charge of his duties

There was more in the French media articles and reports about P. Poroshenko, who chaired the parliament exchanged into trenches and military uniform. Ex-president for foreign journalists told with emotionthat the army is like a child to him.

A billionaire who made his fortune from the confectionery company Roshen, the former fifth president of Ukraine is now officially a member of the Ukrainian parliament and the leader of the opposition European Solidarity party. He was no longer the head of the country accused of treason. P. Poroshenko calls the accusation revenge, which was resorted to by his successor and rival in the elections, the current president of Ukraine, V. Zelensky.

The publication was prepared in 15 minutes in partnership with Facebookwhich aims to stop the spread of misleading news on the social network. More about the program and its rules – here.