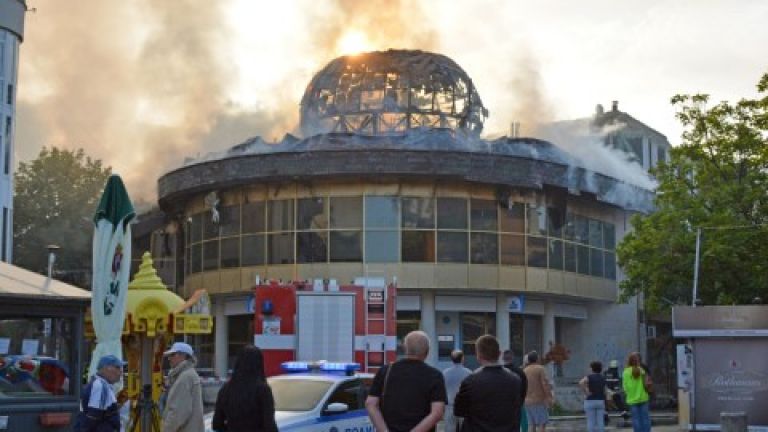 He has been detained for causing the fire that broke out in the center of Blagoevgrad on Sunday, Blagoevgrad District Prosecutor Borislav Kovachki announced at a briefing, BTA reported.

The fire burned the emblematic for Blagoevgrad building “Dome”, which houses a bank branch, as well as glued to it nightclubs, shops and offices.

In the first hours after the fire broke out, the main version of the fire was a short circuit in an electrical panel. Subsequently, footage from a video surveillance camera of the municipality, which was provided to the police, established that the fire was not caused by a short circuit, but by a man filmed by the cameras, it became clear from the mayor of Ilko Stoyanov.

After an eight-hour national search, the man seen in the footage from the cameras was detained and it was established that it was a case of arson, Borislav Kovachki announced. The detainee is a 43-year-old man from Dupnitsa.

In the early hours of September 5, he was in a nightclub in the center of Blagoevgrad, where he was taken out of the security because he was harassing a woman from the staff, said Borislav Kovachki. An hour after leaving the nightclub, around 6.30 in the morning, he returned with a bottle full of petrol and set fire to the electrical panel at the entrance to the club, after which he fled.

The information available to the investigating authorities is that after the arson the man returned to his apartment in Dupnitsa by taxi, after which he went to a village in Dupnitsa.

See also  US Open | Bencicová - Šwiateková 7: 6, 6: 3, Olympic champion Bencicová is at the US Open in the quarterfinals, Djokovic lost a set

“After that, it is not known what he did, because he probably took out the battery of his phone and his route cannot be established,” said the Blagoevgrad district prosecutor.

The man suspected of the arson was detained at the Kalotina border checkpoint shortly before leaving the country, about 50 meters from the border with the Republic of Serbia, Borislav Kovacki said. The man is to be certified, after which he will be detained for up to 72 hours, Kovachki added.

The signal for the fire was given at around 6.40 am on Sunday, September 5. Firefighters managed to stop the fire before it reached the residential buildings attached to the “Dome”. Everyone living in them was evacuated.

No one was injured.

They will build a new dome

The roof of the emblematic for Blagoevgrad building of the “Dome”, which burned down during yesterday’s big fire in the city center, will be restored without changing its vision, said at a briefing Mayor Ilko Stoyanov.

The roof structure of the building was obsolete, which made it difficult for firefighters to put out the fire, the mayor said. According to him, the will of the municipal leadership is to apply all modern measures in the construction of the new dome, so that it is at least fire-hazardous.

Ilko Stoyanov stressed that during yesterday’s big fire with the actions of all institutions, and especially the firefighters, they prevented the spread of the fire and endangered the lives and health of people. Immediately after the signal was given, police officers were on site to evacuate Blagoevgrad residents living in the immediate vicinity of the fire.

See also  Camille Combal: how Kev Adams hurt him on the set of District Z