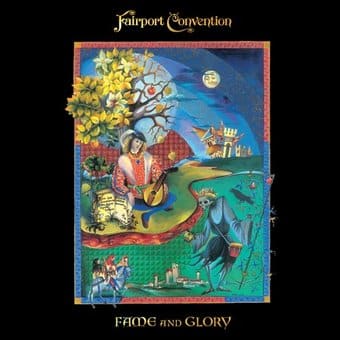 Lovers of British folk are in luck this year, at least there is something that gives us touches of color in this 2020 that will remain for the history of mankind. If I was recently talking about the new works by Judy Dyble and Jacqui McShee, now it’s the turn of one of the bands, or rather, the quintessential British Folk band, Fairport Convention. Although it is true that it is no longer that group that released masterpiece after masterpiece in the seventies, it has kept the essence and part of the charm in music. I had the pleasure of seeing them relatively recently and it was something magical, as well as being able to enjoy some close, humble and very kind musicians.

“Fame and Glory” is an album of compositions by the Breton composer Alan Simon. The connection between England and French Brittany has always been very strong on a musical level, the Celts left a very deep mark on both lands and their music crossed centuries acquiring new nuances but keeping the essence. Fairports are smart guys and they know that a drive like this can be tough to digest depending on how you approach it, and this is where experience and years on the road are crucial. The album, which is an ode to the Middle Ages, to King Arthur and his knights, is dosed with a third of instrumental compositions with four live recordings and guest vocalists like our beloved Jacqui McShee who had not been so active for years. Another great and delicious surprise is being able to hear one of the best voices in progressive rock, the late John Wetton. But the guests are not left alone in these two illustrious, there are also Martin Barrede Jethro Tull, John Helliwell, the legendary Dan Ar Bras on electric guitar, Andreas Vollenweider and his harp, Alan Simon, Laurent Tixier, Pat O’May , James Wood and Dave Mattacks on drums.

But that the Middle Ages is not a handicap when listening to the album, since the Fairport sound is very present with its folk-rock arrangements and Simon Nicol in charge of most of the voices. More than a full-fledged album, it is a compilation that spans more than a decade of Fairport contributions with different artists, with a mix of live and studio tracks that makes the album perhaps somewhat less coherent than an album. conventional.