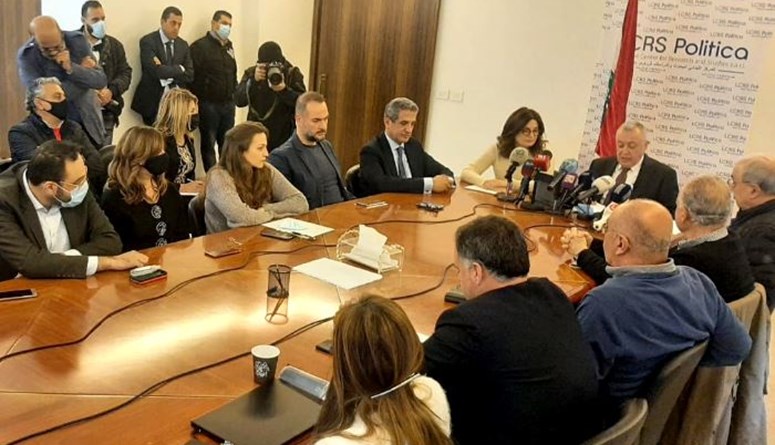 “Because the dollar has crossed the threshold of 33,000 pounds… and there is no solution,

Because the roads are closed daily, and today more because of the strike of taxi drivers and public transport… and there is no solution

Because the Lebanese state, despite its loyalty to the ruling party, is unable to influence its decision to liberate institutions and allow the government of Lebanon to meet… and there is no solution,

And because the country’s president, an ally of Hezbollah, is unable at the end of his term to accomplish what should have been accomplished at the beginning of his term… and there is no solution,

Because the Speaker of Parliament needs Hezbollah’s support for him in order to resolve his battles with his opponents… and there is no solution,

And because the prime minister is unable to arrange a constructive dialogue with the International Monetary Fund and launch necessary reforms, and he is at the head of a government governed by the will of Hezbollah and not by the constitution… and there is no solution,

For these and other reasons… and because there is no solution, We arranged our priorities and, on January 10, 2022, launched the National Council to Lift the Iranian Occupation on Lebanon.

Fatfat pointed out that “200 participants Participate in the first session, They are divided between residents and expatriates.

Citizens and citizens carry Lebanon wherever they find and make up their minds like us, that there is no solution to the financial, economic, political, living crisis … and even the entity of Lebanon, except by liberating the state from the restrictions imposed on it by the weapon of Hezbollah, which is submissive to the will of Iran and carries out an occupation in its favour. described in every sense.

He added: “Here I want to emphasize that there is no division of the occupation, there is no political, security and economic occupation. Occupation is an occupation and a point on the line. And the first to talk about it were the Iranian leaders who talked about their occupation of four Arab capitals, and the presence of six armies affiliated with them in the region, the first of which is Hezbollah.”

He pointed out that “all those who participated in the first session became founding members of the Preparatory Committee for the National Council, and we ask them all to participate in any activity in their capacity. The Lebanese Center for Research and Studies – LCRS-Politica is a guaranteed address to send us suggestions and means of communication.”

He announced that he assumed the presidency of this council for a constituent period, “which we hope will be short, in order to achieve the following objectives:

2 – Preparation for internal elections that include: a president, a political body, committees, and a general secretariat.

3 – Supervising, coordinating and communicating with all spiritual and national references in order to form a broad independent cross-sectarian current that will take upon itself “lifting the Iranian occupation of Lebanon”, including every sovereign who is convinced of our national principles.

4 – The General Assembly of the Council meets whenever the need arises.

5- The temporary political body meets every fifteen days and whenever needed.

The National Council and the elections so that there is no confusion.”

He stressed that “the National Council defend On the Lebanese constitution in all its aspects. The holding of elections on their constitutional date is considered a right of citizens, and he demands that they be held and warns against tampering with their dates. Despite its insistence on elections and the necessity of people’s participation, the council does not believe that elections, in light of the current balance of power, are a station for actual change, as we tested the placement of ballot boxes in the face of weapons in 2005, 2009 and 2018, and we realized that weapons nullify the effects of democracy.

He also announced that “what the council will do is the following:

1 – To remove any ambiguity, we are neither an electoral gathering nor an electoral platform for anyone, and there will be no candidate on behalf of the National Assembly in the upcoming elections. Rather, we raise this issue to the Lebanese public opinion so that everyone who wants to run in the elections determines their position on the Iranian occupation before the Lebanese.

2 – We seek to unify the political reading and unify the title of the elections. We either run them as free Lebanese in order to “lift the Iranian occupation of Lebanon” or they are useless.

In conclusion, there was a dialogue with Fatfat, who said in response to a question: “My positions have always been clear regarding settlements, even during the Syrian presence. I refused the extension of President Emile Lahoud and refused to elect President Michel Aoun. I also rejected all the settlements that took place. For me personally, this matter As for Sami Fatfat, this is a personal position that belongs to him alone, and I am definitely not a candidate for the upcoming elections. Sami Fatfat is not a member of the National Council and he decides what he sees fit for him, just as the National Council also decides what he sees fit.”

Regarding the fact of the dispute with the Sovereign Front, which also raised the “title of liberating Lebanon from the Iranian occupation,” he pointed out that “we are not in an atmosphere of competition with any party, but on the contrary, we salute each party that raises the sovereign title. We have national constants that we mentioned in our political program.” And I will repeat it: the constitution, the Taif and the completion of the Taif, Arab and international legitimacy, specifically international resolutions 1559, 1680 and 1701. We talked about the matter that became clear, which is that nothing can be reformed in Lebanon under this Iranian occupation, which is represented by Hezbollah’s weapon in Lebanon, in the legal sense. And in the security sense, especially after the disruption of institutions.”

Fatfat recalled that “they suspended Parliament for two and a half years to impose a president. Now, they formed a government and failed in it, and at the time of President Hassan Diab, when their government was 100 percent, they failed to achieve any achievement. Today, they tried to find a new settlement with President Najib Mikati, but they are obstructing the work of The government and they prevent it from meeting because they want to dismiss a judge. By what logic can we say that there is no occupation in light of this practice? They destroyed the Lebanese economy, not just the port. .

Then he was asked: “If the coalition – the Future – Socialist Forces was formed, would you meet them in the middle of the road?” Fatfat replied: “We will meet any person, any party, and any political current that raises this slogan.” We are not in the field of competition with anyone to meet, we put forward a political proposal before the Lebanese public opinion, and we are a National Council whose mission is to lift the Iranian occupation of Lebanon, and whoever believes in these constants will certainly meet him and we will not be in the position of a fencer. And I will add, that we will not be in the field of reactions and engage in polemics with those who criticize us.”

Fatfat concluded: “Perhaps there is a question that was not asked about some of the personalities who confirmed their entry to the National Assembly, I will mention them: the former minister and MP Moeen Al-Morhebi, the former MP Dr. Mustafa Alloush in his personal capacity, Minister Hassan Mneimneh, Dr. Tawfiq Kaspar, Professor Ghassan Moghagb, the former MP Fares. Said, Mr. Amin Bashir, Mr. Bahjat Salameh, and many other ladies and gentlemen working in the public field.There is an intersection between what we are proposing and what was also proposed, and as a reminder, two weeks ago, five former presidents signed, namely, President Amin Gemayel, President Michel Suleiman, and President Fouad. Siniora, Prime Minister Saad Hariri and President Tammam Salam, on a memorandum delivered to the Secretary-General of the United Nations, Antonio Guterres, and this is a very important matter because it transcends sectarian and regional borders, they define almost the same demands without mentioning the Iranian occupation, which we mentioned on the issue of Taif, the constitution, Arab and international legitimacy and resolutions The United Nations, and therefore there is a development in Lebanese public, popular and political opinion towards these demands.”