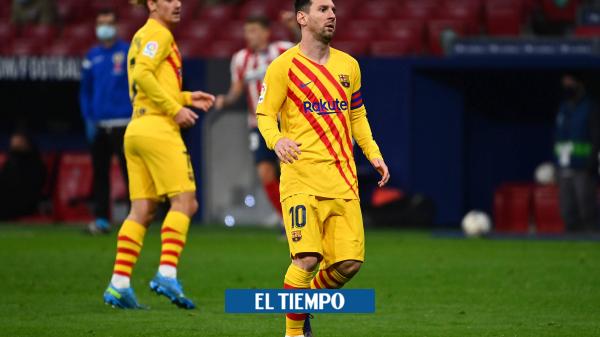 Lionel Messi and Antoine Griezmann, involved in the controversy over the statements of the French environment and the reaction of the Argentine, went from being the object of the gatherings to the inconsequential on the grass of the Wanda Metropolitano, where Barcelona fell 1-0 against Atlético.

The Argentine star, who played 800 games for Barcelona this Saturday, barely had one chance against the second rival he has scored the most times in his career -32 goals in 42 official duels, he has only scored more goals for Sevilla, 37- , which broke a streak of four games in a row marking the rojiblancos.

It may interest you: (Finally, ‘Cholo’! Atlético beat Barcelona 1-0, which was injured).

An inconsequential duel after a hectic previous week between the two attackers from Barcelona: the comments in the French press of several people from Griezmann’s environment – his uncle and his former representative – criticizing the role of Messi in the locker room Barcelona hinted an animosity between the attackers. Messi’s response came as soon as he arrived from the concentration of the Argentine team.

“I’m tired of always being the problem of everything at the club,” he said as soon as he landed at El Prat airport.

Koeman, for his part, tried to move the media focus away from the two players. “Maybe your intention is to create controversy but I have not seen at any time that there is any problem between the two. enough images where they work well together, where assistance is given … I am not in favor of looking for problems, “he settled.

Following the same logic, the Dutch coach lined up both of them on the pitch, with Messi starting as a false striker and Griezmann behind, Pedri and Dembélé on the bands; and the Frenchman had the first when they barely had three minutes of play: a good split from the French winger, who crossed for the shot with the toe of his compatriot, over the goal of Jan Oblak.

It may interest you: (With Cuadrado as captain and a double by Cristiano, Juventus added 3 points).

Later, with the Argentine having more freedom and the French placing himself in that false position of ‘9’, it was possible to see how the controversies are undone on the pitch: Messi looked for Griezmann in a center to the far post in minute 14, too long, for which he apologized to his teammate.

And so they were relieved in that task of offering themselves in attack, in a first half in which both teams were losing momentum. However, Messi always appears.
He did it in 41, thanks to a magnificent deep pass from Jordi Alba, with a tunnel including a rival, who left the ball in the small area for the kick, somewhat heeled, which he caught on the ground cloud.

With the surprise of the goal for Atlético by Belgian Yannick Carrasco just before the break, Barcelona’s search for reaction did not go through their forwards, but through the Frenchman’s head Clement Lenglet, who chained two heads, to the center of Alba first, and of Messi later. In both he found cloud.

Spectators while Atlético enjoyed their best moments, with continuous arrivals of Trippier and Llorente on the right, they were practically not seen in the second half, until around the last quarter of an hour, Messi received on the front. He stirred, but met an attentive Stefan Savic.

In that better phase of Barcelona, ​​the best of the Argentine was seen again: a diagonal to force the lack of Giménez and two yellows for the rojiblancos for protesting and a center with his left foot for the header of Griezmann, arrested with Oblak.

Right after, the Frenchman was replaced, and little else was heard from Messi. From a controversial week to an inconsequential duel of both in Madrid.