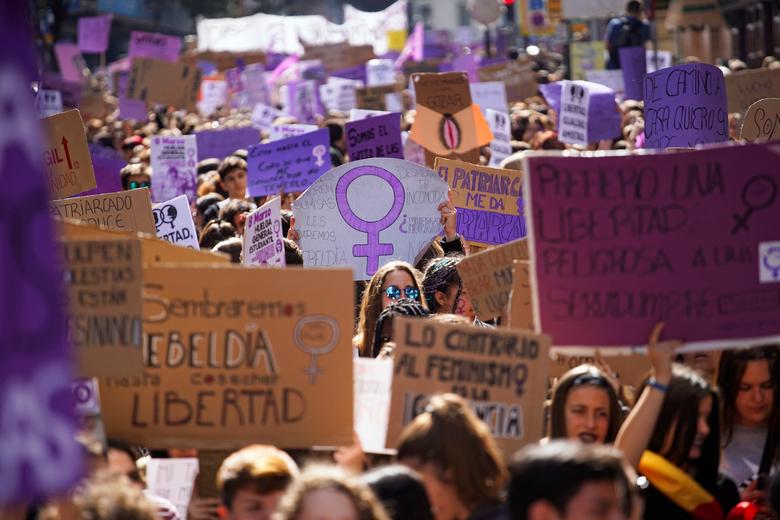 Feminists are always to blame for everything. We have always been the resource to attack when nobody wants to face reality or question. You just have to see that the feminists and the 8M were the first judicial case for being the “cause” of the covid infections at the beginning of the epidemic. Then, all scientific studies have shown that the virus was long before, among other issues, after a football match. But it is the same, the 8M continues to be heard in the Congress of Deputies as the cause of all the evils.

I insist. We are guilty of everything. Even not being able to complain if they mistreat us because then we are victims, and this is not only a comment from sexists but also from comrades of the movement. We are also bad because we do not believe in free choice if you are poor. We are guilty of not involving men or any other group (without this being a club where accreditation is requested). We are evil if we define ourselves as a secular movement because we do not integrate either. We are evil if we oppose the veil or forced marriage. Bad if we talk about our vulva, our vagina or our period. The messages we hear now are not very different from those told to suffragettes, including incomplete and not perfect women, that we have smelling vaginas, that we are male if we do not wax, we do not have enough breasts or we do not we paint the nails.

Everybody asks and demands feminism to be part of it, even if it doesn’t matter what feminism has been asking for for three centuries. I have had people in my environment who have joined unions, parties, clubs, associations, movements of all colors … I have never seen anyone demand that they adapt to their wishes. On the contrary, they have asked, they have seen what the thing is about and have grouped themselves according to their interests. Because doing the opposite is as if I were going to Apostolic and Roman Catholic Mass but wanted to talk about Muhammad. As if I am joining the association against breast cancer but I want to talk about colon cancer. As if I join a rock band but I want to sing pure sevillanas. Like I’m signing up for the white tide but I want to talk about public school. What interest could anyone have in reacting like this? Either it is because she lives oblivious to everything, or I allow myself to doubt her intention.

And since gender mandates are not abolished and we are educated to endure everything, to integrate, to feel sorry, to look more for others than for ourselves … we cannot design strategies to avoid feeling guilty. Because quickly, in addition, if you answer the least, someone will accuse you of all possible hate crimes to silence you and to increase your guilt.

Just this week, two women who were victims of abuse (although one of them, with her self-esteem still greatly affected) asked me how to integrate men into feminism. I refuse to continue infantilizing. We are all too old to know what principles a movement has and how to respect and adapt to it. And to that woman I had to tell her, for once in her life, stop worrying about how to care for and protect others and focus on saving herself, because feminism is in the first instance to save us. Men have never had to come and tell us how to articulate this movement. We haven’t asked for instructions. We have not expected anything. We have built it ourselves for centuries to live and survive. It has been built to be able to read, write, study, work, travel, think about our pleasure, take charge of our own life or defend ourselves. All for a common cause, whether we are in Madrid, Taiwan, Nepal, Honduras or South Africa. And once you are saved if someone does not want to integrate into feminism it is not your problem. Feminism is required to include all struggles, but how feminist are the other movements? How feminist is the LGTBi movement? How feminist is the environmental movement? How feminist is unionism? Not only in a brushstroke in his theory to look good, but in practice, in meetings, in assemblies, in respect for the participation of women, in respect for the feminist agenda … Why does all the weight fall? in feminism and it is not analyzed how much there is machismo in other movements?

I’m so tired that I don’t care about everyone. I only care about the women who tomorrow will ask for help in the hunger queues or those who will fight in court tomorrow for the custody of their children after abuse or the one who sleeps in a brothel today because there are those who applaud prostitution or the girl who tomorrow She will travel to Morocco because they have sold her to get married. Because they are alone. I insist, alone. And today feminism will not save them. I think about them and they will surely say that not even feminists help them because they listen to us debates that do not solve their immediate life. And above all I have to read in networks that in feminism “you only care about women.” Of course I care about the rest of the inequalities and injustices in the world, but I focus on them just as there are those who focus on other people, other groups or dolphins, for example, without anyone telling them: why do you care? of dolphins and not of centipedes? They throw absurd interpretations and judgments at us.

I drag tiredness and tired of having to explain basic feminist concepts. And, deep down, I think you neither listen nor pay attention because misogyny is so present that it is activated automatically. I think you do not understand us because you are not interested and because, by far, you have not experienced a minute of what many women have experienced. And, above all, giving thanks for not being genitally mutilated or forcibly married and for having been able to study here. Because the reality is that millions of women in the world cannot do even that in the 21st century. Tired of having to justify ourselves. Tired of having to give instructions. Tired of worrying about the rest and not about ourselves. And all this while we are increasingly divided and separated.

I always say that the most valuable heritage that women have is feminism because they are our rights. A heritage achieved at the cost of much suffering and of many murdered whom we must honor and respect their memory. It is the conquest of the rights of women with their own body and struggle. A fight where all social movements have always been respected but not sharing all the objectives or goals, does not justify hatred or lies. What happens is that living by gender mandates is much more comfortable because it is what we have been doing all our lives. Our reality and oppression is there, it is not a lie, it is in the data, in our bodies, in the material. The problem with everything is that feminism surpasses you because feminism is undoubtedly much more revolutionary than you can assume. Much more revolutionary than you can ever imagine, because it would turn your lives upside down. This is the only way to understand the attack and the extreme demand on feminism. Perhaps before launching attacks you have to review yourself and analyze how much you really are a feminist. Keep demanding but I remember that feminism owes you nothing.