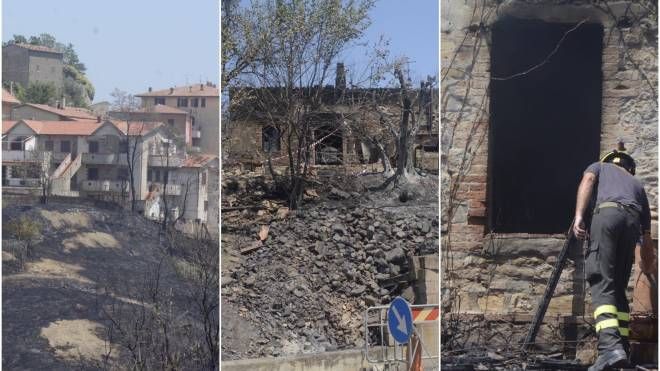 Grosseto, 25 July 2022 – Tuscany in the grip of flames. Yesterday another fireafter that devstante in Versilia, attacked the Maremma. Fear and flames in the municipality of Cinigiano in the locality of Il Crocino where, without stopping, the firefighters and the firefighting teams worked to stem the damage and save the people since the fires have almost surrounded the town.

The shooting of the outbreaks

In the night between Sunday and Monday they were there shooting outbreaks. Extinguishing and remediation operations are in progress. The firefighters are willing to supervise the infrastructures in the areas affected by the active fronts and under reclamation in the other areas. A super job that of firefighters and firefighters.

And around 5 pm an outbreak was rekindled not far from the town of Cinigiano, as informed by the fire fighters. The releases of water from the AIB aircraft of the Tuscany Region have therefore resumed with the intervention of a Canadair. As regards the reclamation, about 50 units arrived from the commands of Florence, Siena, Prato, Livorno, Bologna and Parma in addition to those of the Grosseto command.

The words of Giani

The president of the Region Giani sums up the emergency: “I made the point again on the impressive fire of Cinigiano. The total affected area is approximately 700 hectares estimated but not all covered by flames as there are unburnt areas within the perimeter. The emergency is over and the fire is in containment, regional helicopters with ground crews are intervening to avoid shooting outbreaks due to the wind. Not even time to put out the flames a Massarosa that our regional machine has been called to a new difficult battle in Maremma. Thanks to the operators, volunteers and firefighters involved, the Tuscany of fire fighting remains at the forefront and alongside the affected communities “.

Due to thefire in the municipality of Cinigiano are reported inconvenience in the Amiata area of ​​Grosseto for theinterruption of telephone lines and the data network. At this moment at the Castel del Piano hospital it is not possible to perform radiological examinations, to take blood samples and it is not possible to use the internet.

Same thing for the Arcidosso call center which is isolated and therefore the Cup (Single Booking Center) is not reachable. The recovery times, explains the ASL, are not currently assessable as they are related to the fire containment operations.