“First the poorest”: López Obrador insisted that there will be no bailouts of businessmen and will distribute four million popular credits

May 22, 2020
19
0
Share
Facebook
Twitter
Pinterest
WhatsApp
Press conference headed by President Andrés Manuel López Obrador, as well as the head of Social Security, Zoe Robledo, and Graciela Márquez, head of Economy to report the progress regarding the granting of “Credits to the Word” to support small and medium-sized companies affected by the Covid-19 pandemic. (Photo: Cuartoscuro)

This Friday, May 22, the president Andrés Manuel López Obrador, presented with his cabinet the deck of credits available to individuals and companies due to the economic crisis caused by the coronavirus.

There are seven modalities that the federal government has arranged to serve “the poorest”. IMSS, ISSSTE, Infonavit, Fonacot, Fovissste, Well-being, to the word, they integrate the popular credits that will distribute 307,000 million pesos in four million credits.

“It is something unique because many resources are being allocated for the welfare of the people, we are talking about millions of credits,” said the president in his traditional morning conference from the National Palace in Mexico City. 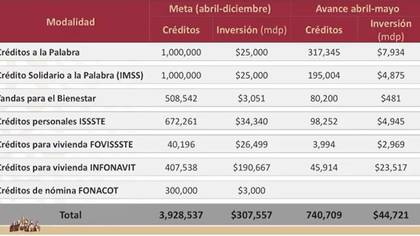 “It is something new, unpublishedBecause they are credits to the word that have to do with a principle that we uphold, according to which the greatest wealth of Mexico is the honesty of its people ”, he explained about the supposed efficiency with which the supports are distributed, without intermediaries.

“There are no bureaucratic procedures, the interest rates are the lowest that can be found, if they are compared with the credits when they are granted by commercial banks, let alone other usurers, truly usurers,” insisted López Obrador.

Consistent with the economic policy that led him to the presidency, López Obrador insisted that the priority of his government is to attend to the social base rather than to large companies, for which there will be no bailouts.

“This that had not been registered in previous governments has other components, the first thing is that the economy is strengthening from the bottom up. Before, in the face of a crisis, those at the top were rescued, they started with the domes, the big corporations, ”he established.

“Everything the government does is from the bottom up, first to the neediest, first to the poorestWe are in the social pyramid, serving from the bottom up, 70% of Mexicans, from the poorest to the middle middle class. And 30% of the middle class upwards also benefit, because if there is justice there is peace, peace is the fruit of justice, they benefit because if they support those from below, the purchasing power is strengthened and this means that they support industries, support commerce ”. 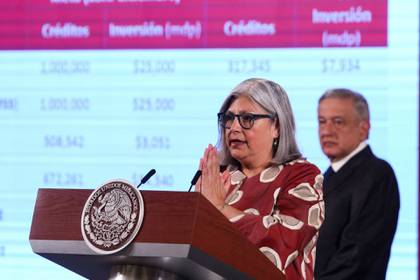 The federal government’s bet is that there will be circulation of money despite the crisis.

“There may be an economic crisis, but if supports are being injected down, they do not stop registering sales. Even in crisis, people are maintaining their purchasing power and those at the top help each other. The government is promoting megaprojects so that those at the top benefit, ”he said.

For the President, the imminent entry into force of the new Trade Agreement with the United States and Canada (T-MEC), will be a balm in the face of the looming economic crisis.

“We are going to start trade relations with the US, with Canada in July, Mexico has a special situation, because with the treaty sales are assured in the strongest market in the world, this is something exceptional, who benefits, entrepreneurs, professionals, technicians and many jobs are generated, “he said.

López Obrador exemplified that direct loans from Infonavit without intermediaries or construction companies is a way of trusting people and breaks the cycle of corruption of previous governments. “More than 600,000 abandoned apartments is the heritage of the neoliberal period.”

“The people are government,” he concluded.

Share
Facebook
Twitter
Pinterest
WhatsApp
Previous articlebig crowd on the beaches, the prefect of the North could come back on their reopenings
Next articleThe Vivo X50 will have a huge photo sensor stabilized by gimbal – Clubic

Financial day: Wall Street fell 4% and dragged the ADRs, which yielded up to 14%

It was short the bullish trail of financial valuations, which...
Read more

An international team of scientists explained the appearance of coronavirus symptoms that are not...
Read more
Archynewsyarchynewsy.com