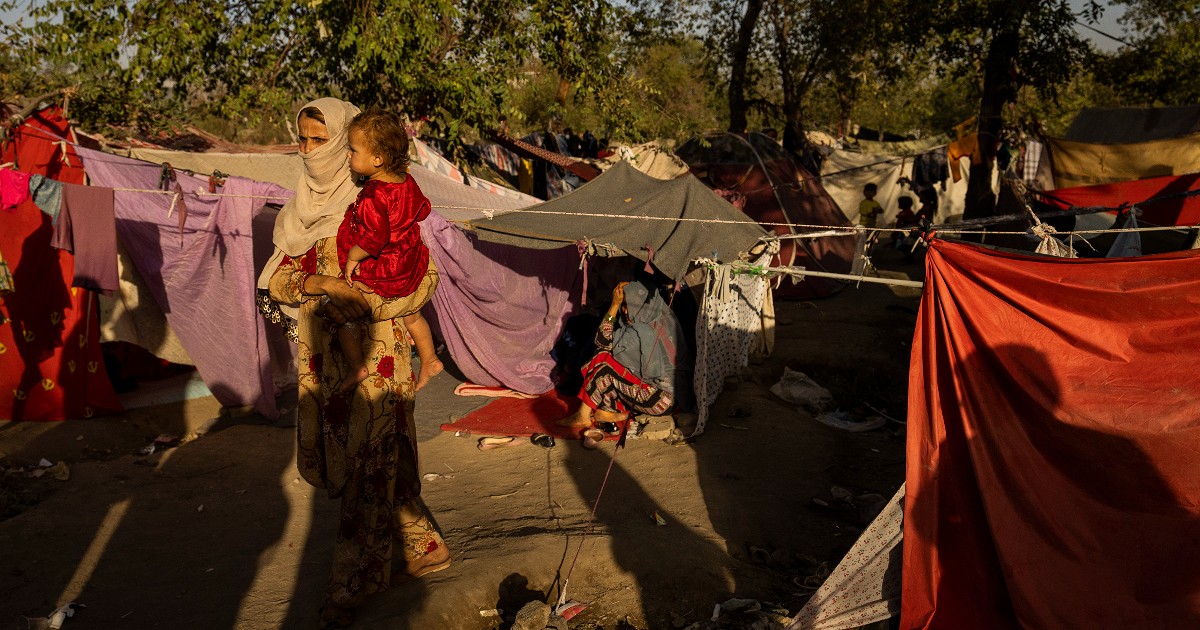 “I am forced to sell my children for hunger. We have abandoned our home in a distant village and now we try to survive here ”. Abdul Khaleq |, father of six children, five boys, including a newborn just a few weeks old, and a girl, also fixes the price: “50 dollars is enough, even less. If necessary, I give them without asking for anything in order to save their lives “, he tells Ilfattoquotidiano.it.

Earlier this week Khaleq loaded his wife and children onto a truck to escape from his native village in the mountainous province of Badghis, district of Jawand. We are over 300 kilometers from Herat, the ‘Italian’ city, also managed in part by our military contingent for almost twenty years during the mission Then, following the terrorist attacks orchestrated by Osama bin Laden in the United States on 11 September 2001. Abdul Khaleq’s dramatic and emblematic story tells better than many analyzes the situation in which a large section of the Afghan population finds itself, now exhausted due to the heavy economic crisis which is getting worse and worse after the new takeover of power Taliban: “We have nothing left. The last two months have been very hard. The economic crisis has stopped everything, in our village nothing has arrived and staying there would have meant a certain end. No work, no food, no hope. There was no alternative to traveling. We thought that arriving in a big city (Herat, with almost 600 thousand inhabitants, is the third most populous center in Afghanistan after the capital Acceptance e Kandahar, ed) could have given us hope “.

Abdul Khaleq has a drawn face and a subdued voice. He immediately understood that that hope remains remote anyway and despair is mounting in its place: “I am willing to make any sacrifices. For the past few days my family and I have barely been able to eat anything. After a ride aboard a truck, we did the last piece of road to get to Herat on foot. We are exhausted and have no place to sleep. I repeat, my children are for sale, I have no alternative. The reason is related to urgency. We are hungry, there are other mouths to feed and the one given up could certainly have a better life than ours. Spread the message, anyone who can and wants to deal, I’m here. More affluent families than Herat or Afghanistan, active humanitarian organizations, anyone ”.

More of the sectarian violence, from the executions and a return at medieval rules that characterized their first coming to power in the late 1990s, the Taliban government is showing its inability to manage the country, starving an ever-increasing portion of the population. Especially the rural one of the remote villages of the most backward provinces. For now Abdul Khaleq and his family are camp in a city park, an esplanade on the edge of one of Herat’s two main arteries, not too far from the splendid Citadel and the Great Mosque. The site was chosen by hundreds of families who fled from the countryside and the most remote rural areas of the province and neighboring ones, from Badghis, in fact, to Farah and so on. Within a few weeks, one arose tent city which day after day is expanding. Now it also hosts Khaleq’s family who, however, have one more problem: the cold of the Afghan winter. “We have no money left and we don’t even have a tent to protect us. We arrived a few days ago, we have to organize ourselves. For now, let’s fight the cold with blankets and lighting the fire. During the day, older children go in search of some wood to keep us warm and anything that can help us, even rummaging through the waste. We have to get by somehow. We weren’t rich before, but we managed to survive with a few jobs, there were exchanges of products, the land was cultivated. Suddenly, within a few weeks all this collapsed and like us, in the same conditions, there are many families in the villages around Badghis. You will see, this tent city will expand ”.

The level of despair in a city that has also imploded after the arrival of the Taliban in power and the daring flight of Italy and humanitarian organizations. The relaunch phase is not yet in sight. The Taliban are still engaged in some sort of showdown on an ethnic basis and towards those who have collaborated with the NATO mission and have not noticed that Herat, like the rest of the country, is imploding: “Taliban or others, I don’t care what kind of government there is in power Kabul or in the provinces, others make politics. I only know that if something doesn’t change we will all die very soon ”, is Abdul Khaleq’s final comment.