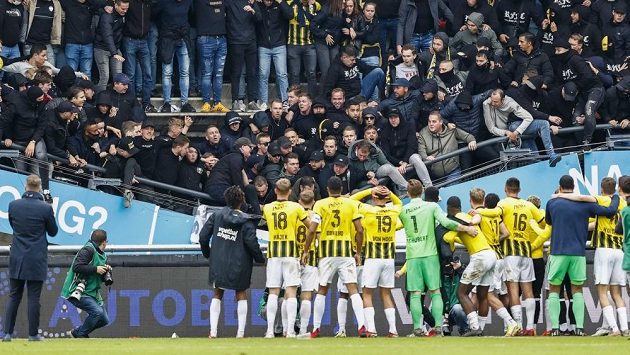 Under Vitess Arnhem’s fans, part of the grandstand crashed during the final thank-you note.

What was going on inside you when you saw the tribune sink?

It was a shock. It was after the match, the emotions worked, we won the derby. At first I thought, Did the tribune really fall? I stood with the boys on the playground with my mouth open. I didn’t know what to think.

Did you tend to run to the fans for help?

On the one hand, there is a barrier between the playground and the grandstand, in addition, there is a hollow of about five meters, where there are stalls with refreshments. We would be crazy to run there. No one could know what the tribune could do next. Fortunately, the fall did not spread to sectors where families with children sat. God forbid that nothing happened to anyone. Thanks to the container that slowed down the fall of the grandstand. It was full of wheels from carts and lawn care items. He’s written off, but he kept the tribune. If the rest of the people attacked the others, there could be an accident.

How do you explain the accident? It is a classic concrete tribune.

I don’t understand how it happened, because the concrete is forty centimeters wide. Now it’s up to the Dutch association to react. This can happen anywhere. In Alkmaar, the entire roof of the grandstand fell two years ago, fortunately at night when no one was in the stadium. They should check the statics of all stadiums.

But fans continued to grow even after the incident.

They went to the higher point of the tribune, began to jump on. They spent a three-second shock quickly, continuing the celebrations. But this was just the beginning.

The match ended at half past four, we left the stadium before half past seven. We were locked inside, as well as the home team. Outside, the wilderness took place between fans of both clubs. They thrashed, smashed police cars. When we left the stadium, the situation seemed calm. But then Nijmegen fans emerged, throwing sticks at the bus.

Czech football player at a terrifying moment in the Netherlands. The tribune collapsed under the fans

Are Arnhem’s matches with Nijmegen so intense every time?

This is a huge match for the region, a derby. The day before, there were a lot of fans in training, they came to support us. They talked to us, they told us that the match with Nijmegen was the most important thing for them. In the final, what happened then happened. Matches with Nijmegen are high risk, our family members were not allowed to travel to the match.

You intervened in the match for the last six minutes, the game load was not significant even in the previous three matches. At the same time, you started the season excellently.

“In the beginning, I played everything, the most minutes of all the defenders. In addition, we advanced to the Conference League. But then the coach told us that he wanted to spin the defense. I may be upset, which would be the beginning of the end. Or be upset healthily and wait for a chance. I chose the second option, I will work hard and wait for the chance.

See also  A referee gets down on his knees, asking for permission from a player.. Look what happened