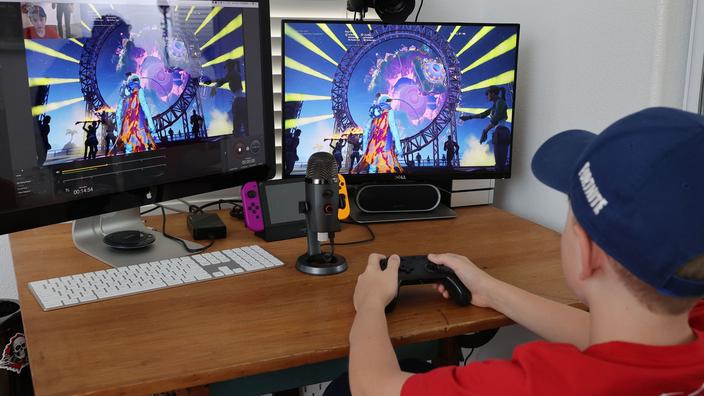 Epic Games announced earlier this month that it was going to stop the Chinese version of its game, which never earned it a penny for lack of official permissions.

Fortnite and China are over. As he had announced in early November, the American publisher Epic Games on Monday cut the Chinese servers for its online video game. For three years now, in partnership with the Chinese giant Tencent, which is one of its shareholders, Epic Games exploited a version of this global phenomenon that was adapted to this market. But the Fortnite Chinese did not bring him a cent: the publisher has never obtained a green light from the Beijing authorities to monetize his creation.

If the game Fortnite is free, players are strongly encouraged to buy credits (V-Bucks) in order to change the appearance of their character: clothes, hairstyle, accessories … These purely optional purchases reported to Epic Games $ 5.7 billion in 2018, $ 4.2 billion in 2019, and $ 5 billion in 2020. And nothing in the Chinese market at all.

The reason for the Chinese authorities’ refusal has never been clarified. But the failure of Fortnite in China illustrates the unpredictability of this huge video game market. The latter generates billions of dollars in revenue each year but remains subject to the goodwill of the central power, which issues marketing authorizations after careful examination of the content of these video games. Without this precious sesame, it’s impossible to tickle the wallets of Chinese players. And the wait for publishers can be measured in months or even years.

Already long, the procedure slowed down further in 2021. It has been more than three months since the administration has issued any marketing authorization. The central power is also in the process of broadening its censorship in order to “moralize” the leisure activities of the Chinese. Video games offering an alternative version of historical facts or featuring effeminate characters will no longer be allowed.

The current situation has nothing to reassure Epic Games. Worse yet: Beijing accuses video games of having a negative impact on children’s well-being. Since September, minors can no longer play online. only three hours a week, only from Friday to Sunday between 8 p.m. and 9 p.m. … but it is young adolescents and children who constitute the main audience of Fortnite.

To make matters worse, teenagers under 16 are no longer allowed to broadcast their video game games live on the Internet on platforms like Douyu or Huya, the Chinese equivalent of Twitch. These are an excellent way for video game publishers to promote their productions.

Epic Games isn’t the only western player to forgo the Chinese market because of an increasingly hostile regulatory environment. At the beginning of November, Microsoft announced to stop the social network component of its professional platform LinkedIn. The latter will only broadcast job ads. Yahoo also threw in the towel and stopped all its Chinese services on November 1.