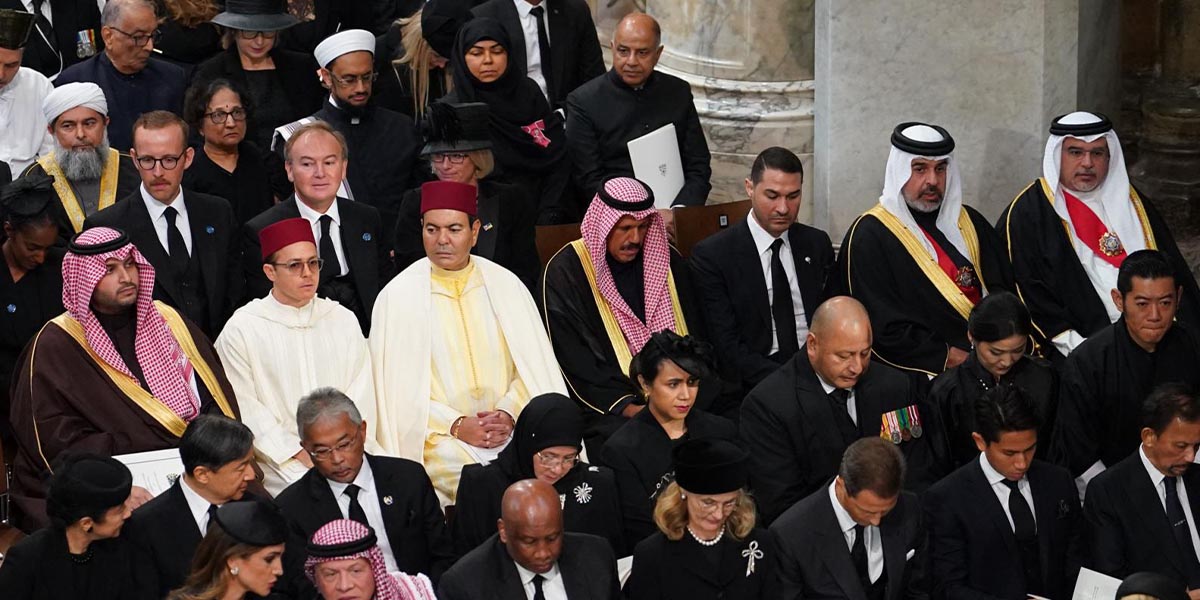 The British capital is under glass. After ten days of national mourning decreed since the disappearance of Elizabeth II at the age of 96, a grandiose funeral took place in London, yesterday Monday, September 19. For several days, the British were able to meditate in front of the queen’s coffin.

Since the sad announcement of Buckingham Palace, a whole country is in mourning. The United Kingdom paid, this Monday, September 19 in London, a last tribute to Queen Elizabeth II. Eleven days after the Queen’s death, some 2,000 guests, including heads of state and government from around the world, gathered at Westminster Abbey to attend the funeral.

Starting with Prince Moulay Rachid, representative of King Mohammed VI, King Felipe VI of Spain, Emperor Naruhito of Japan, Albert and Charlene of Monaco, and Queen Letizia. For the heads of state, Joe Biden, the American president and his wife Jill are present, as well as Emmanuel Macron and his wife Brigitte. The funeral began at 11 a.m. (London time) and was officiated by the Dean of Westminster, David Hoyle. Elizabeth II’s coffin was carried to a Royal Navy gun carriage, hauled by 142 sailors. They set off at 11:44 a.m. for a short procession to the abbey. The coffin, which was due to arrive at 11:52 a.m. in front of the abbey, was followed on foot by King Charles III and the other members of the royal family. Shortly before 1 p.m. the bugle sounded, marking the start of two minutes of silence across the UK. At 1:15 p.m., the coffin was again placed on the gun carriage, for a final procession, to the sound of Big Ben and cannon shots. Arrived at Wellington’s Arch, the remains were placed in the hearse on their way to Windsor Castle, where the Royal Family and 15 Prime Ministers and Heads of State from various countries, including Britain’s new sovereign, attended, 5 p.m. at the funeral service.

More than 2,000 guests
The state funeral, the first since Winston Churchill’s death in 1965, was attended by some 2,000 guests at Westminter Abbey, including several hundred world leaders, many royalty and nearly 200 anonymous heroes. The sermon was delivered by the Archbishop of Canterbury, Justin Welby, spiritual leader of the Anglican Church of which the British sovereign is the formal head. An hour later, the ceremony ended with the national anthem. It has been more than two centuries since Westminster Abbey hosted a royal funeral. The latest, those of King George II, dated from 1760. Since then, British sovereigns had preferred the less oversized setting of St. George’s Chapel in Windsor. But Elizabeth II had expressed the wish to return to Westminster, where the abbey can accommodate more people.

This funeral completes a national mourning marked by an immense wave of collective emotion. Tens, if not hundreds of thousands of people, came to meditate in front of the remains until the last moment and the closing around 05:30 GMT of Westminster Hall, the oldest section of Parliament where the coffin was exposed day and night for five days. . Some will have waited up to 24 hours in the queue that snaked for miles along the Thames. But under the sun or in the cold night, they were there for the one who had served them for 70 years, 7 months and 2 days. She was at the time of her death, in addition to the United Kingdom, queen of 14 kingdoms, including Australia, Canada and New Zealand.

See also  The Buenos Aires justice authorized the friends of Margot Robbie and Cara Delevingne to leave the country: they must pay 2 million pesos each

Some of these countries have made no secret of their wish to see their link with the monarchy evolve. During her life, Elizabeth II, whose dignity Joe Biden hailed on Sunday, had traveled the equivalent of 42 times around the earth. Died on September 8 at the age of 96 at her residence in Balmoral, Scotland, the sovereign will be buried in the early evening at Windsor Castle, in St. George’s Chapel, alongside her husband, Prince Philip. Their son, King Charles III, succeeded him on the throne. A challenge in a country in the grip of an economic and political crisis, and which saw in its queen, very popular, a symbol of unity. Elizabeth II’s funeral was shown on giant screens and in cinemas across the country.