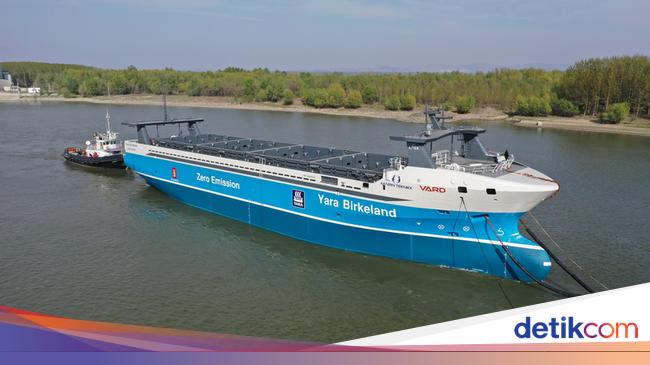 The trend of electric vehicles is increasingly endemic in the world. Not only cars or trucks, this time it’s the turn of container ships that use electric motor technology for their operations. In addition, this container ship also has an autonomous feature that allows it to sail on its own without a captain.

Reported by Reuters, this electric container ship is named Yara Bikeland. This ship is a fully electric ship with self-steering or the world’s first autonomous.

On Thursday (11/18/21), Yara Bikeland sailed for the first time on the Horten route to Oslo. “November 18, Yara Birkeland made its first and only trip to Oslo before it was put into operation,” Yara wrote on its official channel.

“After departing Horten in the morning, Yara Birkeland arrived in Oslo in the afternoon of November 18 for partners to experience the ship firsthand and learn more about the process behind this great achievement,” they continued.

“With the aim of reducing the hauling of diesel powered trucks by 40,000 trips per year, Yara Birkeland will reduce NOx (Nitrogen oxide) and CO2 emissions, improve road safety, reduce road dust generation and reduce traffic noise when transporting fertilizer from Yara’s plant in Porsgrunn, Norway. to the export port in Brevik, Norway,” they wrote.

“The Yara Birkeland will enter service in 2022. It will initially start a two-year trial to become autonomous and be certified as a fully electric autonomous container ship,” Yara continued.

See also  The price of emission allowances set a record, reaching more than 70 euros per tonne

On paper, the Yara Birkeland container ship can carry cargo of up to 120 TEU (Twenty-foot Equivalent Units) and a load of up to 3,200 tons. This ship can also go up to 15 knots, although in Eco mode the speed will be limited to 6 to 7 knots. With the power present in two Azipull pods of 900 kW, and two thrusters of up to 700 kW, this ship can reach a top speed equivalent to 24 km/hour.