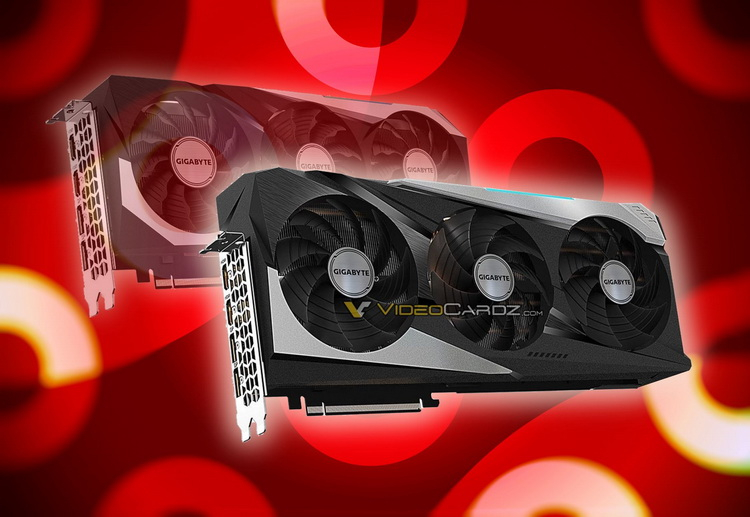 Gigabyte is going to release several versions of the Radeon RX 6950 XT, RX 6750 XT and RX 6650 XT graphics accelerators at once. Their images were shared by the VideoCardz portal.

The images showed almost all versions of future Radeon 6×50 XT video cards from Gigabyte. The exception was the Aorus Radeon RX 6950 XT Water Force. However, accelerators in this version are usually presented by the manufacturer later, separately from the main announcement.

We can immediately note that the Gigabyte Radeon RX 6950 XT Gaming OC version is equipped with a significantly larger cooling system compared to the current Radeon RX 6900 XT Gaming OC from the same manufacturer. The new map is not only wider, but also longer than the current model. This is not only about the cooling system shroud and larger fans, but also about the larger heatsink and rear reinforcing plate.

It is curious that despite the higher power consumption than the regular Radeon RX 6900 XT, Gigabyte decided to use the old design of the Gaming OC series in the new card, and did not borrow the new look of the same GeForce RTX 3090 Ti 24GB Gaming OC. Apparently, while the new design of this series is exclusive to GeForce cards.

The latest Gigabyte Radeon RX 6950 XT Gaming OC appears to use exactly the same PCB as the regular Radeon RX 6900 XT in the same design. The new card received three 8-pin connectors for additional power and is equipped with a non-standard set of external interfaces of two DisplayPort and two HDMI connectors.

In turn, the Radeon RX 6750 XT and RX 6650 XT models in the Aorus, Gaming and Eagle versions did not visually change compared to the current Radeon RX 6700 XT and RX 6600 XT in the same versions. All four variants received three-fan cooling systems, equipped with a non-standard configuration of external interfaces and additional power connectors.

The announcement of fresh video cards Radeon RX 6×50 XT is expected on May 10th.