With that of Jorge Iván Ramos, 225 former FARC combatants have already been assassinated since the signing of the peace agreement, according to figures from the ex-guerrilla. EFE / Juan Páez / Archive


The Presidential Advisor for Stabilization and Consolidation Emilio Archila, revealed this Saturday that the Special Unit of the Attorney General’s Office, has already assumed the investigation to clarify the facts surrounding the murder of former combatant Juan de Jesús Monroy and his bodyguard Luis Alexander Largo, linked to the National Protection Unit, UNP, in events that occurred in the last hours in the rural area of ​​La Uribe, Meta.

After regretting what happened, the Counselor said that Monroy, 47, was attacked on the banks of the Guayabero River in the El Planchón village.

Councilor Archila added that the Inter-institutional coordination table, made up of UNIPEP, DIPOL, the Ministries of Defense and the Interior, the UNP and other government bodies, will meet next Monday at 10 in the morning. 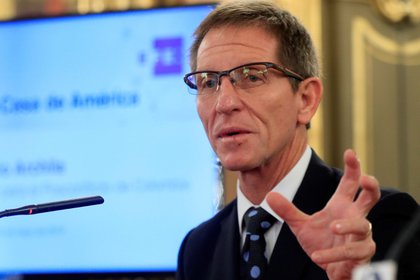 The High Councilor for the Post-Conflict of the Government of Colombia, Emilio Archila. EFE / Fernando Alvarado / Archive


“The security of the more than 13 thousand ex-combatants who remain firm in the law and in their reincorporation processIt is a commitment of the government and of all Colombians. Giving them these guarantees is our priority, ”said Archila, who also revealed that Monroy had no threats against him or had reported risk cases.

A team of experts under the command of prosecutor Luisa Obando is conducting investigations to determine the circumstances and the material and intellectual authors who participated in this double crime.

Archila recalled that Monroy, who was the leader of the reincorporation process, He was part of the driving forces of the Development Programs with a Territorial Approach (PDET) in his region.

They assassinate a former leader of the Farc

Monroy, known as “Albeiro Suárez”, and his escort called “Yeferson Mandela”, were shot in a rural area of ​​the Uribe municipality.

“Two other signatories of the peace who believed and worked for her. His departure hurts us deeply, because of his memory and because of the love they felt for the territory, we will continue working tirelessly, ”the FARC reported on their social networks.

This movement indicates that with the crimes of Monroy and Largo There are already 234 former combatants killed since the Colombian government and the guerrillas signed the peace agreement in November 2016.

“We demand guarantees for the signatories of the agreement, who work every day for peace in Colombia”added the party. 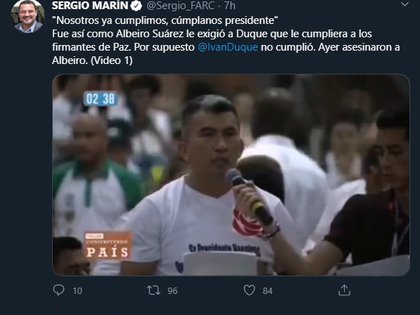 The head of the United Nations Verification Mission in Colombia, Carlos Ruiz Massieu, condemned the murder of Monroy, about whom he said: “His sensitive loss is a tragic reminder of the need to reinforce the protection of those who put down their arms and bet for peace in Colombia”.

“We regret the murder of Jesús Monroy, committed to reincorporation and peace. We send condolences to his relatives. And we remember the importance of continuing to work for the protection and safety of former combatants. Our commitment to reinstatement continues “, said, for its part, the British embassy in Colombia.

Meanwhile, the Norwegian embassy, ​​one of the guarantor countries of the peace process, lamented the crime of a former guerrilla “key in the implementation of the reincorporation and environmental protection project.”

“It is urgent to strengthen the protection of those who laid down their arms. Our condolences to relatives and to the entire population in the process of reincorporation of the region “added the diplomatic representation on Twitter.