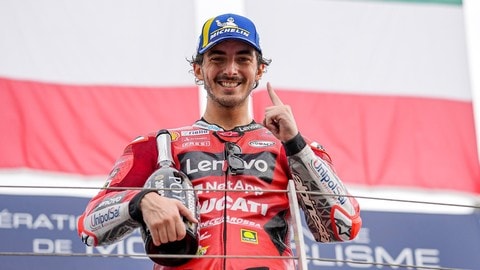 Francesco Bagnaia did an encore, hitting his second career success on the Misano track, in MotoGP. A real back-to-back for Pecco, who only seven days ago had won his first victory in Aragon, fighting hand-to-hand with Marc Marquez. A different but equally sweaty success, the one obtained on the home track. Built with great skill and coolness and a strategy that worked perfectly and allowed the Piedmontese to accumulate enough margin to protect himself from the great return of Fabio Quartararo, who unlike Pecco had a medium tire at the rear.

“We knew that we absolutely had to make a difference in the first laps, with the soft – the Italian said to the microphones of Sky Sport MotoGP, at the end of the race -. I tried to push immediately and saw that I immediately opened a gap and tried to be as constant as possible, so as not to work too hard on the tires. Except that he, in the last laps, earned me those three / four tenths, which I gave him at the beginning. It was really hard, also because the last two / three laps were really hard, I tried to push as hard as I could, so much so that in the last lap I made the best T3 of my race. It was wonderful”.

Bagnaia: “In Misano you have to push”

A battle all played on pure performance, fought on the edge of tenths. Quite different from last week, but no less tough. On the contrary.

“This track, in general, is shorter, you do more laps, but it is harder, because physically it is more difficult – explained Bagnaia -. But it must be said that the drop in rubber here is very different compared to Aragon. In Aragon you run the race almost entirely under management, while here you have to push. And the last few laps I managed to figure out how to use the rear less. I cut off really hard and let it flow a lot, without having to go so much on the gas. This allowed me in the last two steps to still make a great pace, also because on the last lap I had to push hard to keep him from arriving. I knew he could make some money, but instead I did my best T3 of the race. I was a little afraid that he would pass me in the slow wagon, instead we managed to stay in front and in the end it was wonderful, because winning two in a row is so beautiful, but at home it is really special and it is a great emotion for me “.

A victory that gives morale

An important victory, which allowed the Ducati rider to nibble a few more points from the leader of the standings, reaching 48 points away.

“Here I almost wanted the victory more than in Aragon. It was very important – Pecco said -. I earned fewer points on Fabio than on Aragon, but mentally it helps me to have even more motivation in Austin. It must be said that we are working from God, we are very strong, the bike is scary and we are managing it in the best possible way. We are already doing a good job for next year, which will definitely help us. Tonight we are having dinner with the whole team, as we finally have the tests, and I will be happy to share this victory with them. “