You draw our attention to an article by Forbes, which is roughly the translation of another, which appeared in Provence May 10, and titled “Coronavirus: the explosion of prescriptions for hydroxychloroquine”. We read in particular: “Patients who have had access to hydroxychloroquine in the treatment of Covid-19 are generally more socially advantaged.”

These media are based on a pharmacoepidemiological study of a scientific interest group called Epi-flagship and bringing together the National Agency for the Safety of Medicines and Health Products (ANSM), and the National Health Insurance Fund (Cnam). The study published on May 4 is entitled “Drug use in the city during the Covid-19 epidemic: update after five weeks of confinement”. It covers the first weeks of 2020 (from the start of the year to April 19). This period is compared with those of the years 2018 and 2019. In total, the authors observed “466 million prescriptions, or 1.2 billion lines of prescriptions” in destination to “51.6 million people in the general scheme”.

The authors devote part of their work to “Drug treatments potentially linked to Covid-19”, among which we find paracetamol; ibuprofen (which was the subject of controversial warnings at the start of the crisis by the Minister of Health, Olivier Véran); chloroquine; hydroxychloroquine; azithromicyne. The association of the latter two to treat the cases of Covid-19 is mainly defended by Professor Didier Raoult, but its effectiveness has not been scientifically proven.

Reimbursement of hydroxychloroquine for Covid patients

The authors rely on the “National Health Data System (SNDS) reimbursement data”. The Cnam develops by email: in its work, “The term” patients “means a person who has had a reimbursement (or several reimbursements) for a given medicine”.

The fact that hydroxychloroquine appears in the study, and that its authors consider the consumption of this molecule as “Potentially linked to the Covid-19”, reveals that health insurance reimbursed this drug, including when it was prescribed against the new coronavirus – that is to say, outside of its marketing authorization or MA (which often happens with the drugs to believe many of our interlocutors), but above all outside of his usual indications (which is rarer).

The Cnam is justified: “The” off-label “control programs preferentially focus on targeted situations (expensive drugs for example, systematic nature, etc.)” In other words, ad hoc prescriptions for inexpensive drugs, as was the case with hydroxychloroquine, do not beep on the radars of Safely, which tends to reimburse them.

Increase in deliveries of hydroxychloroquine and chloroquine 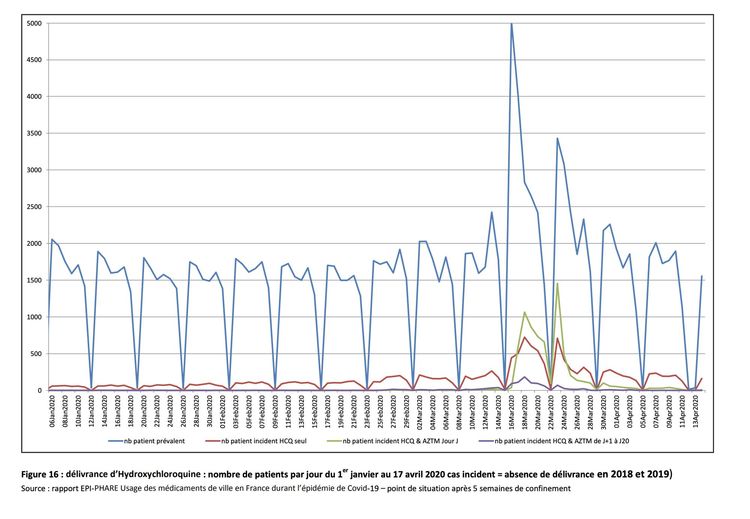 The peak of chloroquine delivery (450 February 27), in red in the first graph, concerns patients “Incidents”, i.e. who have not had a prescription for chloroquine in the previous two years.

The CNAM establishes a direct link between this spike in “new” patients buying chloroquine … and the publication on February 25 of a video by Professor Raoult, where he said about a Chinese study: “It just came out!” It’s effective on new coronaviruses. ” The professor talks in this video – like many media at the time – of “chloroquine”. When it is actually hydroxychloroquine (a derivative of chloroquine) that he later defends in his protocol.

You also asked us: What are the differences between hydroxychloroquine and chloroquine?

As for the peak delivery of hydroxychloroquine (5,000 on March 18), in blue in the second graph, it concerns patients “Prevalent”, that is, who have used hydroxychloroquine in the past two years. The Cnam: “Hydroxychloroquine is used as a background treatment for acute lupus erythematosus and in rheumatoid arthritis. It has about 50 or 60,000 long-term users, who are prevalent patients. “There has been” demand competition for hydroxychloroquine “between prevalent users (storage for fear of running out) and new users (for Covid-19).”

Zahir Amoura, from the National Lupus Reference Center, at CheckNews, already sketched it on March 21: “Many of our lupus patients have reported to us that they are having trouble getting platelet [nom commercial de l’hydroxychloroquine, ndlr].“ This professor of the internal medicine service 2 of Pitié-Salpêtrière (Paris) then retained two hypotheses: “Either some have renewed their stocks when it appeared that hydroxychloroquine could treat Covid-19, for fear of a shortage which they in fact created themselves. Either doctors have started to prescribe them outside the usual indications. ”

“From the end of March and until mid-April the initiations of treatments on prescription of chloroquine and hydroxychloroquine were reduced”, note the authors of the study. In question: the decree of the end of March which restricted the delivery of this drug in the city. However, health insurance does not see a return to normal, since there were in the weeks following this decree 60% (S14), 8% (S15) and 25% (S16) of more patients (prevalent and incidents) than expected for hydroxychloroquine and chloroquine.

All things considered, the authors note: “We estimate that approximately 41,000 more people acquired prescription hydroxychloroquine (or more rarely chloroquine) treatment in weeks 12 to 16 compared to expected.”

Above all, and this is the subject of the question that was asked to CheckNews, we read further the sentence having been taken up by Provence then Forbes : “The population who acquired hydroxychloroquine by prescription – without prior treatment, notably for systemic lupus erythematosus or rheumatoid arthritis – was socially significantly better off and younger than the population of people hospitalized for Covid-19.”

This is also shown in the table below: among the incident users of chloroquine and hydroxychloroquine (who had not used it in the previous two years), 30% have a social disadvantage index of 1, is “Most favored”. 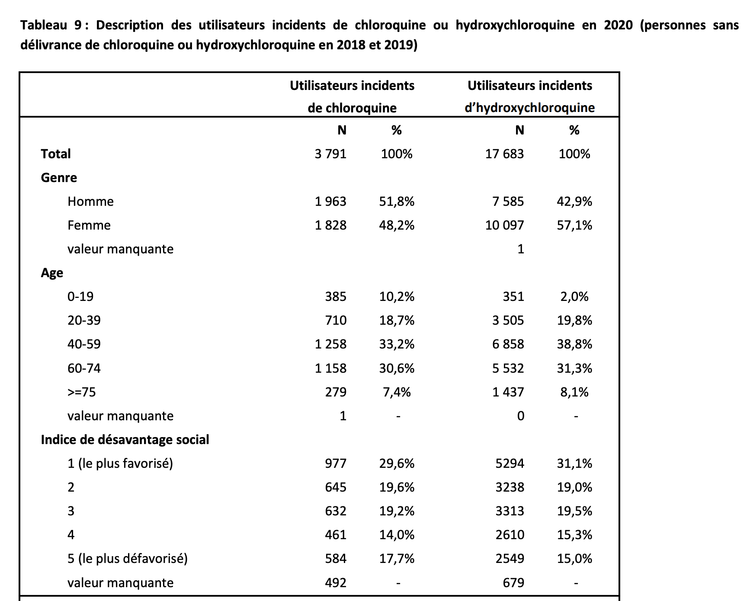 The social disadvantage index is constructed from data from the Institute of Statistics and Economic Studies (Insee): unemployment rate, worker rate, baccalaureate rate, median income per unit of consumption, etc. The IDS is calculated at the scale of the municipalities. Patients are counted according to their municipality of residence.

“The upper classes often have a more preventive behavior”

This observation, which may echo a generally accepted idea that especially privileged people would have had access to hydrochychloroquine, is to be put into perspective. First, “It is relatively common, even frequent, that the wealthiest segments of the population are more the first users of a new innovative product, or make a new use of a product”, writes us the Cnam.

Furthermore, and above all, this pharmaco-epidemiological study only relates to reimbursements after dispensing in city pharmacies. In other words: a patient who was treated with hydroxychloroquine in a hospital only will not appear in this study.

This methodology induces a significant bias, according to health sociologist Etienne Nouguez, who exposes the different social behaviors facing prescription: “The volumes of medical consumption are roughly the same between upper and lower classes: they go about as much to the doctors, consume roughly the same amounts of drugs. What changes is the quality and above all the timing. The upper classes often have a more preventive behavior, that is to say that they go to the doctors at the first symptom. Where the working classes often go when the disease becomes so pervasive that they can no longer continue to work. “

It is therefore likely, following this reasoning, that the inhabitants of the wealthiest cities have had a behavior of buying hydroxychloroquine in their pharmacy from the first symptoms (or even before), where the inhabitants of the most disadvantaged municipalities are likely to have waited before consulting (and therefore to have a prescription). Which could lead them more often to be hospitalized.

Furthermore, continues Etienne Nouguez, that “The upper classes often have fewer associated comorbidities. If you look at the results that are starting to fall for the Covid, the very big determinant in terms of severity and mortality is age. And right after you get obese. Obesity follows the social gradient perfectly: the higher you rise in the social hierarchy, the more the body mass index decreases. So the working classes have a much higher prevalence of obesity than the upper classes. “ An additional factor which could lead the working classes to the hospital rather than to consultations in town (and purchases in pharmacy).

And the sociologist to go further: “The numbers that we have of the higher consumption of hydroxychloroquine in the city by the executives is an artifact. […] If we integrate the hospital prescriptions, I am ready to take the gamble that we would arrive at similar or even higher figures for the working classes. “

Beyond the social criterion, geographic factors may have played a role. Thus, the map of the incidence rate of hydroxychloroquine delivery reveals that new patients purchasing this drug are more present in the regions affected by the epidemic: Ile-de-France and the East.

Still in PACA, Professor Zahir Amoura points to the possible responsibility of another media figure who promoted hydroxychloroquine: the mayor of Nice Christian Estrosi. “One can imagine that it favored the uptake of platenil in the region”, slides the doctor, evoking a “Confounding effect” likely to blur social criteria: “If people take this medicine more because they do like Christian Estrosi, it will not really have anything to do with the fact that they are affluent people.”

The head of the national reference center for lupus is betting on another geographic effect in Guadeloupe and Martinique, where there are proportionally more “new” users of hydroxychloroquine: “In the West Indies, there is a prevalence of lupus which is three times that which we have in France. So it is quite possible that people have a greater habit of seeing hydroxychloroquine being used in their surroundings. ” And therefore be more inclined to buy them.

The absence of prescribers

Another point raised by Etienne Nouguez: the fact that, among the departments where the incidence rate of hydroxychloroquine is highest, there are in particular territories where there is a hospital. This is the opposite of what he found at the end of his analysis of generic drugs: “Generics are found mainly in rural and peri-urban areas, where income inequalities are lowest between patients, where the density and differentiation of doctors is the lowest. And the map of innovations [et en l’occurrence de l’hydroxychloroquine, ndlr] shows the opposite phenomenon: innovations circulate starting from the hospital, towards city specialists, touching city general practitioners. “

Finally, the sociologist regrets that the study by the Cnam and the ANSM does not give any information on prescribers, an element without which it is not possible to correctly analyze the phenomenon of prescription: “We don’t know if it’s a few prescribers who prescribed quickly, or a lot of prescribers who prescribed a little, we don’t know if they are hospital doctors or city doctors …” In short: it will take more to develop a sociology of hydroxychloroquine.

We also treated this subject in podcast. You can listen to it here: